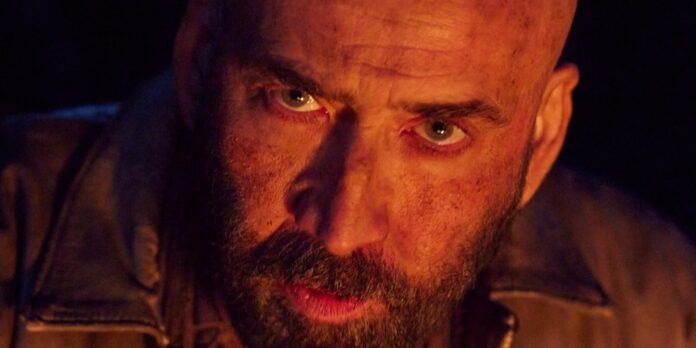 THE STORY – A frontier epic about an Ivy League drop-out as he travels to the Colorado wilderness, where he joins a team of buffalo hunters on a journey that puts his life and sanity at risk.
​
THE CAST – Nicolas Cage, Fred Hechinger, Jeremy Bobb, Xander Berkeley, Rachel Keller & Paul Raci

Between truffle hunting with a foraging pig in Michael Sarnoski’s “Pig” and buffalo hunting in Gabe Polsky’s “Butcher’s Crossing,” Nicolas Cage is building onto his repertoire of stories about human greed at the expense of an animal. Giving a compelling performance with a hint of feverish madness, his latest role in Polsky’s brutal environmental Western has him play notes of obsession in the 1870s Colorado wild.

Miller (Cage) is a hunter hell-bent on slaughtering as many buffalo as humanly possible. His insane ambition attracts bright-eyed Harvard dropout Will Andrews (Fred Hechinger), eager to join the hunt after leaving city life behind in pursuit of a new experience. Will is the “outsider” of this Western story. He enters the frame with a fire in his eyes, not hungry for anything except what he hasn’t yet seen. Miller holds the key to a new world, and the meeting of these two characters is what sets “Butcher’s Crossing” on its bleak course. The journey is slow-moving and doesn’t arrive at a place of fully fleshed-out characters by its conclusion. The performances do just enough to tug the story along. Cage, in particular, is a solemn and fierce presence. Polsky reaches some fine peaks with a thematically resonating view, but ultimately “Butcher’s Crossing” takes a far too simplistic approach to the psychologically layered source material.

Adapted from John Williams’ 1960 novel of the same name, “Butcher’s Crossing” is framed around the protagonist Will, a preacher’s son of immense wealth who decides to finance Miller’s hunt out of sheer naiveté. Much to the annoyance of an entrepreneur in town (played with gusto by Paul Raci, a treat to see in a new film following “Sound of Metal“), Will gives Miller the golden ticket of a lifetime: a fully funded hunter expedition. Along with a mountain man and a buffalo skinner (played by Xander Berkeley and Jeremy Robb), the group sets off on a nightmarish trail. Co-written by Polsky and Liam Satre-Meloy, the screenplay finds strength in juxtaposing the protagonist with Miller because Will’s character is far too void to carry the story alone. Through no genuine fault of Hechinger, doing his best at portraying the character’s shift from naiveté to insight, he is at the hands of a screenplay that feels unfinished. For a film about a protagonist searching for who he is, it is a wonder who this character is, as very little time is spent getting to know him in the first place. In retrospect, the narrative themes touched upon are far more interesting to think about than the key players in this story.

Capitalism consumes Will and Miller, one through economic contribution and the other through obsessive ambition, no matter the cost. The writing builds on that strength by exploring a growing distance between the two characters through their evident relationships to nature. Intended to be a three-week buffalo hunt, the expedition becomes a rough ride through changing seasons. The longer Miller is surrounded by earth’s elements, the deeper into madness he falls. Whereas the time Will spends surrounded by nature, whether taking in the sights of a forest or staring a buffalo in the eye out of reverence, crystalizes a newly found insight into what he cares about. While who Will is is still very much a mystery on this journey, witnessing the destruction of a species first-hand reveals who he isn’t. In the face of all the horror humanity is capable of, particularly the heartless superiority shown over animals, nature holds breathtaking power in its untouched serenity.

Considering the lost time getting to know the characters, it’s a challenge to find an unwavering connection to “Butcher’s Crossing” when the film intently centers its action around the men’s shared experience in the wild. Polsky draws out the journey with flickers of the characters’ fever dreams, suggesting a madness brewing but not paying enough attention to the power of a good buildup. What does help craft suspense is a thunderous score by Leo Birenberg, evoking the feeling of a dangerous sweeping epic when it kicks in.

The performances help bridge a connection, namely Cage, who embodies his role as the intimidating Miller. While not in the top tier of his most recent one-two punch, “Pig” and “The Unbearable Weight of Massive Talent,” the actor’s unique presence works its magic in the West. His magnetism plays a crucial role in luring Hechinger’s character down a path of destructive consumption and the toxic fight for survival. The supporting cast delivers fine work, even though most of the characters feel surface-level. The same sentiment can be extended to the film itself, a merely fine accomplishment that fails to dig deeper beneath intriguing themes.