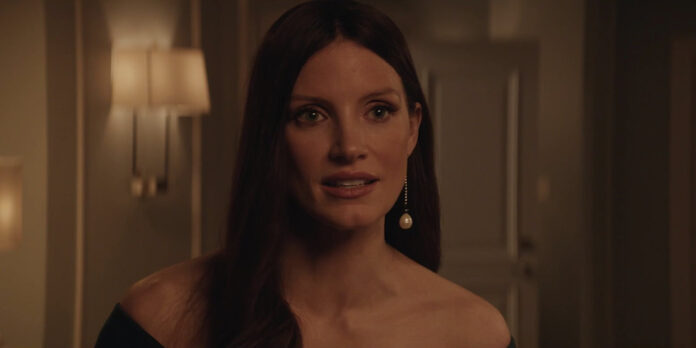 THE STORYThe true story of Molly Bloom, a beautiful, young, Olympic-class skier who ran the world’s most exclusive high-stakes poker game for a decade before being arrested in the middle of the night by 17 FBI agents wielding automatic weapons. Her players included Hollywood royalty, sports stars, business titans and finally, unbeknown to her, the Russian mob. Her only ally was her criminal defense lawyer Charlie Jaffey, who learned there was much more to Molly than the tabloids led people to believe.

​​​For years Aaron Sorkin has been a writer who has entertained us with his stories, his characters, his intellect and his dialogue giving us such classics as “A Few Good Men,” “The Social Network,” “Moneyball” and “Steve Jobs” (To name a few). However, even after decades of work, countless awards and praise, he has never directed a film before. His first directed effort is “Molly’s Game” based on the true-life story of “the Poker Princess” Molly Bloom and it is a breezy, entertaining, solid directorial effort with a pair of commanding performances from Jessica Chastain and Idris Elba at the center. A few missteps with the screenplay, however, hold “Molly’s Game” back from being truly special but this is still a good start for Aaron Sorkin, the director, regardless.

Molly Bloom (Jessica Chastain), is a competitive athlete skier, living in the shadow of her successful brothers and under the strict rule of her demanding father (Kevin Costner). After leaving the world of sports, Molly takes her hard work ethic to the underground world of high-stakes poker. She first starts off as an assistant, then works her way up to running her own games in both Los Angeles and New York with some of the most high-profile and famous people on the planet. After years of running games, making money, building relationships and illegally taking cuts (Otherwise known as raking), a series of events leads to Molly is finally arrested in the middle of the night by FBI agents wielding automatic weapons. The government wants to know her connection to the Russian Mob but Molly maintains her innocence as she seeks the help of criminal defense lawyer Charlie Jaffey (Idris Elba) to prove her innocence much to his reluctance at first but as he gets to know the woman behind the tabloids, he starts to gain a new found respect for her.

Anyone that is a fan of Sorkin’s “wall-to-wall” dialogue will be happy to know that he still has not missed a beat with “Molly’s Game.” Bearing a few similarities to last year’s “Miss Sloane,” (Which many accused of being Aaron Sorkin-lite), Sorkin gives countless monologues, zingers, and voice-over narration to Jessica Chastain to chew on and she nails it with confidence, magnetism, and verve. I don’t think there is a single minute that goes by where Chastain is not spewing a line of dialogue from Sorkin’s giant screenplay. He and Chastain give us a fully three-dimensional woman with agency, strength, vulnerability, fears, and desires. It easily ranks up there with some of the best work Chastain has ever done.

However, for all of the great things I just mentioned, Sorkin threatens to strip Molly of all of her agency in what has been deemed the “park bench” scene. It’s supposed to be the culmination of what makes Molly tick, her relationship with her father and a moment of self-discovery for her. I understand Sorkin’s intention with the scene but when you have Kevin Costner “mansplaining” to Molly exactly what is wrong with her, how she should fix it and starting the conversation off with such an abrasive attitude, it runs counterproductive to all of the good-will he built up with her character previously before. It is here where Sorkin the inexperienced director begins to shine a little bit brighter than before. It’s though as if he no longer trusts that his audience will understand how we’re supposed to feel about Molly anymore and he needs his characters to explain the entire point of the movie to us through dialogue. Molly likes having power over powerful men. Nothing wrong with that theme or displaying it as Sorkin does for the first two hours of the movie but having her demanding, cheating father explain that to her (And the audience) screams foul and false.

“Molly’s Game” is very much about failure and how one learns from their mistakes and continues on afterward, so it’s only fair that Sorkin makes a few mistakes along the way as well. Take the park bench scene away and “Molly’s Game” is a fun time at the movies, as we gleefully watch Jessica Chastain make power moves on men’s ego and vanity. Idris Elba is no slouch either as the scenes he shares with Jessica are the film’s highlight. He has one monologue in particular where he summarizes to the prosecutors why Molly should not be criminally charged in a RICO case and he absolutely nails it. Other memorable performances come from Chris O’Dowd as the always intoxicated Douglas Downey who introduces Molly to the Russian mob and brings them to the table, Bill Camp as Harlan Eustice, a card sharp who gets in over his head and Jeremy Strong as Dean Keith, the misogynist real estate agent who brings Molly into the world of underground poker. I don’t have a problem with Kevin Costner’s performance other than how his character is written but I do feel that Michael Cera as “Player X” (Who’s celebrity status is so high that his real name could not be used) was miscast. The editing is fast, fluid and exciting as Sorkin simply places the camera and doesn’t use any tricks to distract us from the quality of his writing or the actor’s performances. One terrible scene aside, “Molly’s Game” plays its cards right even if it does not win the full pot.