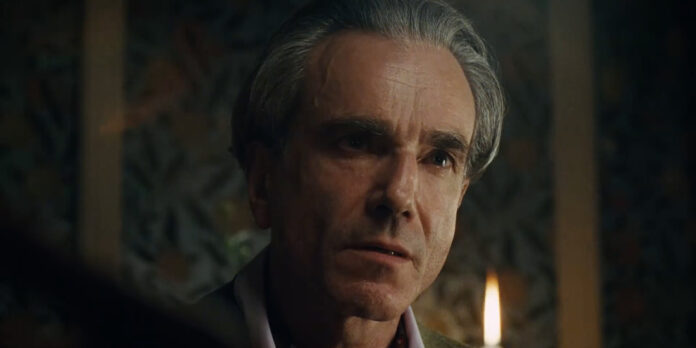 THE STORYSet in the glamour of 1950’s post-war London, renowned dressmaker Reynolds Woodcock (Daniel Day-Lewis) and his sister Cyril (Lesley Manville) are at the center of British fashion, dressing royalty, movie stars, heiresses, socialites, debutantes and dames with the distinct style of The House of Woodcock. Women come and go through Woodcock’s life, providing the confirmed bachelor with inspiration and companionship, until he comes across a young, strong-willed woman, Alma (Vicky Krieps), who soon becomes a fixture in his life as his muse and lover. Once controlled and planned, he finds his carefully tailored life disrupted by love. With his latest film, Paul Thomas Anderson paints an illuminating portrait both of an artist on a creative journey, and the women who keep his world running.

​​While watching Paul Thomas Anderson’s ravishing and seductive new film, titled “Phantom Thread,” there suddenly came a moment where I was reminded of Stanley Kubrick’s “Barry Lyndon.” It might have been when Johnny Greenwood’s breathtakingly beautiful score played its theme but in a more grandiose tone as “Barry Lyndon’s” did. Or it might have been the polite manner in how the characters conduct themselves, even during under moments of great duress. Or perhaps, it’s the inescapable feeling that one gets while watching “Phantom Thread,” that it has all of the makings of a classic, it pays homage to classics, and Paul Thomas Anderson, being the wizard that he is, has cast a spell over us to make us believe it is a classic. By the time the credits rolled, I did not need any spells or convincing. I, like the characters involved in the film, am in love. However, I am in love with “Phantom Thread.” I know I should not be as evidenced by how off-putting it can be at times and how much it tests certain audience member’s patience with its deliberate pacing but I simply cannot help myself. It feels like a classic while watching it, probably because it is one.

Set in the 1950’s in London, “Phantom Thread” tells the story of Reynolds Woodcock (Daniel Day-Lewis), a dressmaker of the highest order who is successful and a bachelor. Moving from muse to muse, from project to project, he has never married. He is only married to his work. The only person he finds room for in his life is his sister Cyril (Lesley Manville) who runs his operation with a cold iron will at what is commonly known as “the house of Woodcock.” Woodcock’s routine is suddenly upended when he embarks on a new relationship with a beautiful foreign woman named Alma (Vicky Krieps), who refuses to abide by Woodcock’s many rules and demands. Their desperation to be together is only matched by their disgust for one another, as the two find unique and twisted ways to keep their relationship alive.

If this is to be Daniel Day-Lewis’ final performance, then I cannot think fo a more fitting note to go out on. Regarded by many to be the most celebrated and acclaimed actor living today, Daniel Day-Lewis has given us many memorable characters and performances over the years, with three Academy Awards for Best Actor to show for it (His second being for his last collaboration with Paul Thomas Anderson, “There Will Be Blood.” Another masterpiece). One can imagine him sharing some similarities to Reynolds Woodcock. A pompous, quiet, polite and particular man who is obsessed with his work. We all know how obsessed Daniel Day-Lewis is with his work as an actor, so you can see the parallel somewhat. To explore this man’s behavior and psyche through his relationships with the two most important women in his life, his sister Cyril and his muse Alma, reveals so much about how Woodcock’s mind works and gives us a doorway into not only an exploration of a self-tortured artist but also into the relationship dynamics he shares with them. I cannot for the life of me, even begin to tell you how wonderfully terrific Vicky Krieps is like the yin to Woodcock’s yang. Not only does Paul Thomas Anderson write her character to be an equal to Daniel Day-Lewis in terms of the content both actors have to work off of in order to make their performances shine but he also writes her, as a character, to begetter than him. This man, who has everything from respect, to success, is nothing but a pestilent child when stacked up against Alma and Vicky Krieps steals every scene she is in, commands our attention and blossoms because of it. Both actors are truly wonderful and give restrained (Those stare-downs!), complex performances that due to their ambiguity will reward viewers whoever decide (As they should) to revisit “Phantom Thread.”

On the technical side, “Phantom Thread” like “Inherent Vice” before it, has a very classic look that does not make you think it was shot in 2017 but instead invokes a timelessness to it that works its way over you as the film progresses. We’ve seen Paul Thomas Anderson be flashy and kinetic (“Boogie Nights” and “Magnolia”), we’ve seen him be artful and vast (“There Will Be Blood” and “The Master”), well now we’re seeing him expand upon his knowledge of cinema as he ushers in a visual aesthetic that harkens back to the 50’s and 60’s. It’s been said that “Phantom Thread” is a gothic romance in the same vein as Alfred Hitchcock’s “Rebecca.” The comparisons are not too far off when one looks at how the film is shot, its confined production design, its exquisite costumes and just how incredibly dark and twisted it gets by the end.

“Phantom Thread” is a movie that cinephiles will continue to watch and re-watch over and over again just as they have all other Paul Thomas Anderson films. I struggle to say whether or not it is his best film but an argument can be made for it I’m sure. Think of it as a more sophisticated version of “Mother” but without all of the violence and religious allegory and you’ll have a pretty good idea of just how exceptional “Phantom Thread” really is. Even down to the sound design at the breakfast table whenever the characters eat and Woodcock becomes “annoyed” by the sound of bread being buttered or by the very essence of anything other than pure silence, “Phantom Thread” is finding new ways to make you feel uncomfortable and then it wants you to confront that uncomfortableness in the best possible way. “The expectations of others causes heartache,” Woodcock says quietly and purposefully at one point. Whatever your expectations are for “Phantom Thread,” it’s best to leave them at the door before you get settled into your seat for another cinematic delight from Paul Thomas Anderson. Submit and give yourself over because this is a visionary artist who yes, may be demanding a lot of you intellectually but I assure you, you’re in creatively brilliant hands.