“MIDNIGHT IN THE SWITCHGRASS” 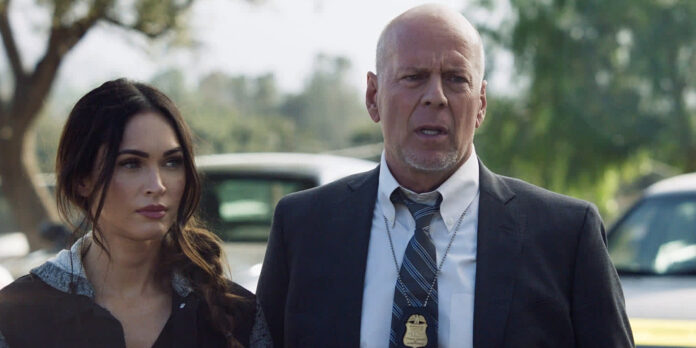 THE STORY – Two FBI agents cross paths with Crawford, a Florida cop who’s investigating a string of murders that appear to be related. When an undercover sting goes horribly wrong, Crawford soon finds himself in a twisted game of cat and mouse with the killer.​

​​​Thrillers, by nature, are expected to spook us and keep us guessing up until the very end…at least that’s what you expect. When it fails on its basic premise, you’re left wondering what you just watched and why you even bothered. The latest submission in this category is “Midnight in the Switchgrass.”

FBI Agents Rebecca Lombardi (Megan Fox) and Karl Helter (Bruce Willis) work undercover to try to bust a sex-trafficking ring in Florida. Rebecca puts herself in dangerous situations – getting close to offenders at shady motels – but she’s dedicated to her work. She isn’t giving up on young girls being forced into an even more dangerous world. At the same time, a series of female murders have occurred in the state, and the crime scenes are starting to look too familiar to officer Byron Crawford (Emile Hirsch). Families are desperate to find out what happened to their daughters, but there seem to be more questions than answers.

One murder draws the attention of the FBI. Soon, the two law enforcement agencies team up to find their suspect. News of Tracey (Caitlin Carmichael) ‘s disappearance also causes a stir, especially since she was last seen with a seemingly kind, family-oriented truck driver (Lukas Haas). As Rebecca and Byron get closer to the suspect’s trail, they soon realize they’ve met their match when things go awry.

The film had potential – a strong cast, an interesting story – but, unfortunately, there are more negatives than positives. Among the decent attributes: Fox. She provides most of the exciting moments. While undercover, Rebecca has an intense scene with an offender, played by Colson Baker (more commonly known as Machine Gun Kelly). They get in each other’s faces; he pulls out a knife as Rebecca’s partner screams in her ear to get out of the situation. It’s an intense and gripping moment to watch, thanks to their on-screen chemistry. It’s also striking to see them in this way since they are love birds in their private lives. Later in the film, they have another scene where we get to see more exciting drama between the two. Another thrilling, albeit difficult to stomach, part is what happens to Tracey. We see her leave a hotel room at the beginning of the film looking dazed, come across someone who wants to hurt her, and is seemingly saved by a kind man. However, that’s far from the truth. We see Tracey endure trauma and fight for her life. It’s hard to watch what is happening to her, but Carmichael delivers at every moment.

Now onto the bad. Any possible twists that this narrative could have had don’t happen…at all. One issue is the fact that the killer is known very quickly in the 99-minute runtime. Even the trailer reveals it within seconds. There are no teases or other possible shady characters to keep audiences guessing. It all points to one man and one man only, which takes away quite a bit of suspense. To be fair, we’ve seen that with other films before (“Seven” comes to mind), but at least they do a much better job of drawing out suspense or throwing in one last twist at the end. That, again, doesn’t happen with this script. Instead, audiences are given one of the laziest, most drawn-out “climaxes” of the year. Everything moves way too slowly. It gets to the point where it all becomes infuriating.

The editing and directing do nothing to help its case either. The camera switches from shaky cam to still frames nonstop. These constant changes will likely give you a headache sooner than they will help this movie look better. Not to mention the editing is choppy. Cutting back and forth between shots feels incredibly awkward toward the end. Various montages are used in random moments, too, which stick out and completely take away from certain scenes.

If you plan on watching this film just for Willis, you might as well not bother since he’s barely in it despite being front and center on the poster. He’s onscreen for probably five minutes and delivers an unmemorable performance as an FBI agent. Hirsch and Haas do decent jobs with their roles, but none of it is enough to save this film.

“Midnight in the Switchgrass” under-delivers in a lot of ways when it comes to how thrilling it could have been. Fox, Hirsch, Haas, and Carmichael do what they can to make this somewhat interesting, but when you have a script lacking creativity and visuals that don’t work, there’s not a whole lot that can save it.