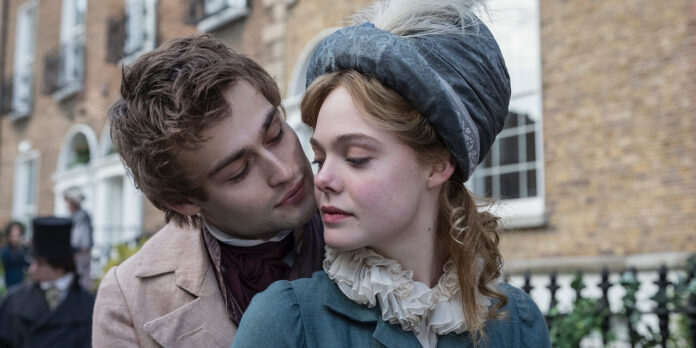 THE STORY – Mary Wollstonecraft’s family disapproves when she and poet Percy Shelley announce their love for each other. The family is horrified when it finds that the couple has eloped, accompanied by Mary’s half-sister, Claire. While staying in the home of Lord Byron at Lake Geneva, the guests are challenged to write a ghost story, which leads Mary to conceive her novel “Frankenstein.”

​​”Mary Shelley,” suffers from one of the biggest issues facing any of the “great artist films”: does the film on screen feel like it inspired the great works of art that the real-life artists created? And often, the answer is no. For every “Amadeus,” there is a dozen tepid, by-the-numbers biopics. Sadly, given “Mary Shelley’s” association with one of the greatest novels of all time, this particular film falls more in the latter category.

Mary Shelley (Elle Fanning ) charts the titular author’s beginnings as the frustrated daughter of a bookshop owner, struggling to write her own story in the shadow of her deceased (But incredibly famous) mother. When her father (Stephen Dillane) ships her off to Scotland to live in semi-isolation and find her creative muse, she encounters the dashing poet Percy Shelley (Douglas Booth), whom she quickly falls head over heels for her. Her often destructive romance with him will ultimately isolate her from her family, challenge her views on monogamy, and instill her with the sense of grief and isolation that will ultimately inspire her to write Frankenstein.

Mary Shelley’s life is an intriguing one. There was a Twitter thread about how “no one was ever as goth as Mary Shelley—after all, she lost her virginity on her mother’s grave.” This is a woman who was a trendsetter in feminism, and lived among those who reveled in excess, experienced grief aplenty and fought to make her mark in a publishing world dominated by men. And ultimately, director Haifaa al-Mansour and writer Emma Jensen approach this fascinating woman in the most…book report style fashion.

For the most part, the film ticks passively along, ticking off boxes in Shelley’s life, demonstrating little passion for the character. For such a whirlwind romance, the script rushes Mary and Percy into a romance. The chemistry is never fully there, and their relationship feels so…PG. And in addition to lacking a spark, Jensen often feels content to tell rather than show and by extension, fails to really get beneath the skin of her character. How do we know Mary likes science? Because a character walks up to her and goes “Oh Mary…you like science.” How do we know Mary feels guilty that her mother died in childbirth? “I killed my mother.” How do we know that Mary feels caged in her life? Because she reads a poem that calls her a “caged little bird.” And yes, it’s abundantly clear to the viewer that she lived a sad and lonely life but then she and Percy and a number of other characters literally spell out the fact that this was Mary’s inspiration. But for a film that lingers on the importance of grief to Shelley’s inspiration, it is surprisingly clean and brightly lit. It never masters the sense of gothic claustrophobia and gloom that one associates with “Frankenstein.” The costumes and sets feel too bright and clean. The famous months spent with writers cooped up at Villa Diodati attempting to write the best horror novel never feels as claustrophobic as they should.

The aesthetics aren’t the only things sanitized, though. The film goes to great lengths to demonstrate how destructive Percy Shelley is to Mary. And yet, it continues to romanticize him, and swings for a happy ending with him. True or not, it feels problematic to throw his borderline abusive behavior to the wind in favor of a happy ending. Which brings forward another problem. Just like in last year’s “Molly’s Game,” there is absolutely an element of ‘daddy issue inspiration,’ with Stephen Dillane’s voice echoing in voiceover, reminding Shelley to write her own story. Seeing her father appreciate her work is meant to be a crucial moment in onscreen Shelley’s life. It feels odd that a film focusing on an important feminist would ultimately focus on the importance that the two men in Shelley’s life had towards her success. In addition, though pretty, the score is thick and overdone. And aside from Fanning, the performances are average, although “Game of Thrones’” Masie Williams appears, sporting a truly awful Scottish accent.

That isn’t to say the film is without merits. Cinematographer David Ungaro and director Al Mansour conjure up some striking images of the Scottish and English wilderness (Although they feel almost Terrence Malick-lite). Fanning, as always, gives a compelling performance. There are occasional montages, meant to replicate creative flowing inspiration, set against rousing music that is somewhat affecting if also resembling a motivational clip one might find on YouTube. And most importantly, the base story is compelling enough that even this dry rendition can’t totally zap its spark, which makes the film’s overall dryness even more frustrating.

In short, “Mary Shelley” exists but nothing more. It is competently made enough but lacks any flash or grit. It wants to dally in grief and loss and wants to hint at sex and debauchery but is afraid to really dig deep. Stephen Dillane’s character tells Mary on more than one occasion to burn the words of others and to write her own story and create something new. It’s a shame the filmmakers couldn’t follow his advice, and instead opted for the most paint by numbers rendition imaginable.