Can “BlacKkKlansman” Bring Spike Lee Back To The Oscars? 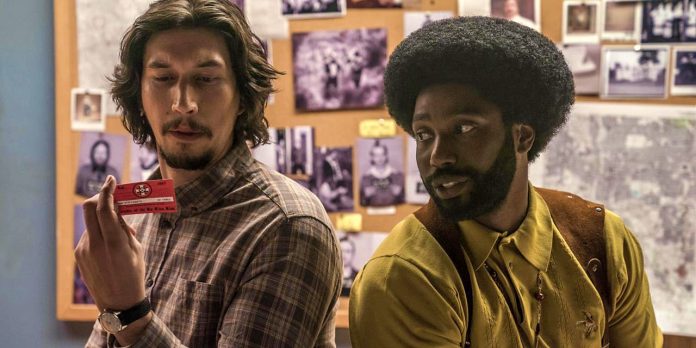 Spike Lee’s “BlacKkKlansman” celebrated a very successful run at Cannes Film Festival, where it won the Grand Prix, essentially second place to the Palme d’Or. It would appear that this could be Lee’s most critically acclaimed film in years. He’s always had a complicated relationship with the Academy Awards. Could “BlacKkKlansman” bring him his first Best Director nomination?

With an unbelievably timely story, based on true events, and a solid cast, “BlacKkKlansman” seemed poised for a strong Oscar run. As our country faces a despicable rise in racism and white supremacy, this is exactly the type of film that could gather strong support. Its premiere at Cannes had critics raving about the passion and anger in the film. Many also believed it had a shot at winning the Palme d’Or itself.

Lee could be looking at nominations for Adapted Screenplay and Director, while Topher Grace has received raves for his portrayal of Klansman David Duke. Expect a potential Best Supporting Actor nod there. The film itself seems like a natural fit in Best Picture as well.
Though he’s been a well-respected director since the 80s, Lee’s films have only received two Academy Awards nominations. “Do The Right Thing” was nominated for Best Original Screenplay and Best Supporting Actor for Danny Aiello, though many were shocked it missed Best Picture and Director nominations. The film has survived the test of time, widely regarded as one of the best films of the 20th Century. John Singleton (“Boyz N The Hood”) attributed his Best Director nomination two years later, the first for a black director, to Lee’s snub. Lee was later nominated for Best Documentary Feature for his film “4 Little Girls.” He also received an Honorary Oscar in 2015 for his contributions to filmmaking.

Though his filmography of late hasn’t seen much critical love, or commercial love for that matter, it’s still shocking Lee hasn’t received a Best Director nomination. In addition to “Do The Right Thing,” films like “Malcolm X” and “25th Hour” seemed like they could’ve made a bigger impact. In addition to praising “BlacKkKlansman,” some are calling it his most commercial film since “Inside Man” which could bode well for his film doing well financially and thus helping to sustain its momentum within the long awards season, considering its early release in August.

​The film releases in the U.S. on August 10th, a little early for a traditional Oscar run. Of course, last year we saw the incredible campaign behind Jordan Peele’s “Get Out,” a February release. In fact, Peele is a producer on “BlacKkKlansman” as well. Like “Get Out,” this film should do very well at the box office, which will always help raise awareness. Don’t expect the early release date to affect this film, though. As unique and controversial as this film promises to be, it seems like it would be hard to get lost in the shuffle. More on this narrative is still to come as we wait with excitement. Welcome back Mr. Lee. We missed you.