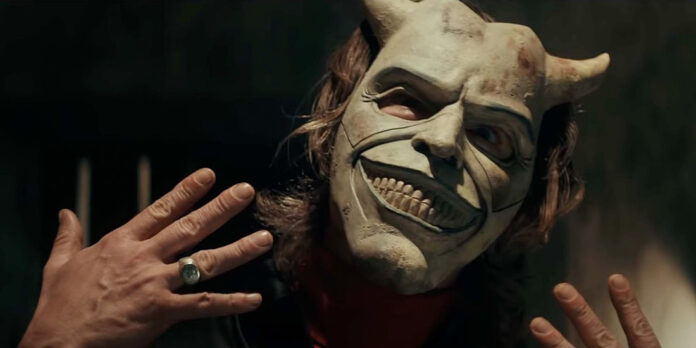 THE STORY – Finney Shaw is a shy but clever 13-year-old boy who’s being held in a soundproof basement by a sadistic, masked killer. When a disconnected phone on the wall starts to ring, he soon discovers that he can hear the voices of the murderer’s previous victims — and they are dead set on making sure that what happened to them doesn’t happen to Finney.
​
THE CAST – Mason Thames, Madeleine McGraw, Jeremy Davies, James Ransone & Ethan Hawke

​​After making a move into the MCU with his 2016 directorial effort “Doctor Strange,” Scott Derrickson has returned to his horror roots with his latest film “The Black Phone.” Based on the 2004 short story of the same name by Joe Hill, Derrickson and his long-time writing partner C. Robert Cargill have come together to present a terrifying look at child abductors and how we all have the potential within ourselves to confront pure evil. With a modest budget of $18.8 million and Blumhouse Productions behind him, Derrickson shows he hasn’t missed a step in his ability to craft a well-earned jump scare or a tense atmosphere.

It’s 1978 in the suburbs of Colorado, and a serial killer and child abductor known as “The Grabber” (Ethan Hawke) is terrorizing the community. He’s taken six children, including the often bullied young baseball pitcher Finney Shaw (Mason Thames). Considering Finney’s friend, one of the toughest kids in school, was also taken by The Grabber, there seems to be no chance of escape from the unknown basement Finney finds himself in. The Grabber is also meticulous with his abductions and has no intentions of slowing down as he leaves no clues behind. However, Gwen (Madeleine McGraw), Finney’s younger sister, has supernatural dreams which reveal the tiniest of clues to her about the Grabber (such as the black balloons in his entertainment services van), which could lead the detectives on the case (one of whom is played by E. Roger Mitchell) to find the killer before he eventually murders Finney. The paranormal elements don’t stop there, as there’s also a disconnected black phone in the basement, which occasionally rings for Finney with voices from the Grabber’s previous victims providing Finney with the strength to fight back and hopefully escape before he too meets the same deadly fate.

Scott Derrickson’s latest film works at its best when it’s grounded in real-world horror. The premise of a serial murderer masquerading around a local suburban town as an entertainment specialist dressed in capes, and masks, and luring children in with the intention of killing them is enough to make your skin crawl. Despite being a period piece, these types of acts are still committed today, and that factual connection is what draws out the dread and nauseating feelings of discomfort and terror from any empathetic audience member. Much like a Stephen King novel, there is also an emphasis on other horrors Finney and other children have to face, such as bullying from other kids at school (the fights in this movie are particularly brutal) and an alcoholic and abusive father (played by Jeremy Davies). These other based elements are portrayed in such an overpowering manner that their brutally melodramatic presentation might be enough to turn some viewers off and crush their suspension of disbelief as they’re accompanied by some forced dialogue and performances from the actors. However, if you’re still on board with what Derrickson is offering in a real-world setting, then the inclusion of the film’s more supernatural components might be enough to make your eyes roll.

There is a strong message behind the black phone that aids Finney against the Grabber. By listening to the voices of the killer’s victims, Finney receives assistance on ways to potentially escape the basement. When such attempts prove to be futile, Finney discovers something more vital: the strength to stand up for himself. Derrickson executes this character growth for Finney very well. So well in fact, that Gwen’s own supernatural abilities prove to be almost useless and unnecessary by the film’s end. One wonders what this film would’ve been like if her abilities were taken away and replaced with a childhood curiosity about wanting to be a detective or journalist, where she could’ve helped her brother in a manner that would’ve been more rooted in reality and how much of an emotional impact that would’ve had on the audience.

“The Black Phone” still gets by on the strength of its dark atmosphere and some heart-stopping jump scares, but it’s the against-type, blood-curdling performance from Ethan Hawke that makes the film stand out. An established, brilliant actor continually challenging himself with new and exciting opportunities, Hawke plays the Grabber as a mentally disturbed individual with a menacing quality (no doubt aided by his creepy white masks) and towering screen presence, which makes him an imposing figure. It’s unlike any other performance we’ve ever seen from him before, and although it might not go down as one of his very best, it will undoubtedly be considered memorable for how distinctive it is amongst the rest of his filmography.

“The Black Phone” is technically sound due to Derrickson’s proficiency behind the camera. Its screenplay is well-intentioned as it does a decent job of getting us inside Finney’s headspace as he desperately tries to survive all of the horrors life throws his way. Considering the film’s blunt storytelling, it will likely scare and inspire audiences equally. However, the juxtaposition of the film’s grounded and paranormal horror is something Derrickson is never quite able to balance for maximum dramatic effect. Some audiences may prefer the type of horror which can only be found in the movies, whereas others might want the kind of horror which can be found in reality to be depicted on screen. I personally prefer the latter, but even if we disagree on this matter, the performances can still come across as overdone (nearly every line from Madeleine McGraw suffers from this), and the writing can feel as heavy as Finney and Gwen’s alcoholic father’s whipping belt. Despite these misgivings, “The Black Phone” still managed to grab me with its mood, tone, and Hawke’s frightening performance.