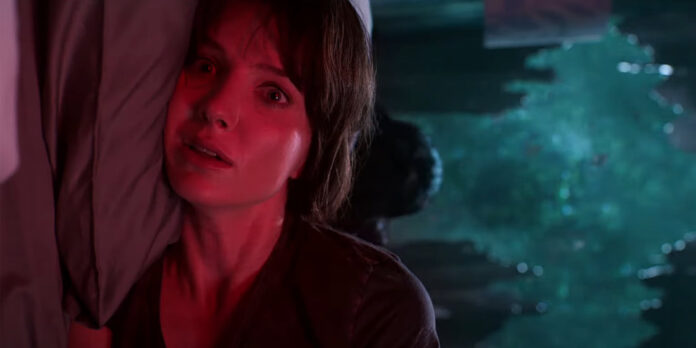 THE STORY – Paralyzed by fear from shocking visions, a woman’s torment worsens as she discovers her waking dreams are terrifying realities.

​​If you’ve seen a James Wan film in the past, you know that things that go bump in the night usually don’t lead to prosperous endings for his characters. In his newest film “Malignant,” Wan gets to show audiences that that’s still the case even with his take on the Italian giallo horror sub-genre, which often includes masked and black-gloved murderers, gruesome kills, and female trauma. Though the film differs from his previous hits, such as “The Conjuring” and “Insidious” franchises, the director continues to prove he can spook viewers and keep them entertained from start to finish. However, it’s not executed in the best way possible.

The film opens up on a creepy research hospital in the 1990s. There’s chaos as a band of doctors can’t seem to control someone or something that is inside one of the rooms. Whatever it is, treatment hasn’t helped it, and an exhausted doctor bluntly states, “It’s time to cut out the cancer.” In the present day, we meet Madison (Annabelle Wallis), who is pregnant and living with an abusive husband (Jake Abel) — the kind that will bash her head against a wall and cause a bloody mess. One night, the couple experiences a home invasion from some scary-looking creature, which leads to the triumphant death of her husband, but also another miscarriage for Madison. Once she returns home, however, her fears are far from over. Madison begins to have extremely vivid nightmares of brutal murders, almost as if she’s in the room and witnessing them happening in real-time. Even though none of the people seem familiar — they’re revealed to be some of the individuals seen in the film’s opening sequence — she recognizes the same perpetrator, dressed in a black coat and donning black gloves, the same one from her invasion, commit each violent act. The worst part? These end up not being dreams at all. Madison decides to tell two detectives (George Young and Michole Briana White) that she’s witnessing these murders in her sleep, and they become more suspicious of her possible involvement. Who wouldn’t if you tell them exactly where someone has been murdered? But the answer to who the killer is maybe her imaginary friend Gabriel from her childhood, who she has long repressed.

Wan is a master of horror, and he shows that he can still scare people without needing to rely on jump scares with “Malignant.” One way is through his effective directing style, which ends up putting audiences right in the middle of the action. As Madison is running through her home trying to escape the predator lurking inside, Wan shows her running from room to room from a bird’s-eye view. As he pans the camera, we almost feel as though we’re running for our lives too. Additionally, he’ll place his subjects in a room with darkness all around them or headed toward blackness. As they take each step, not knowing what they may encounter, viewers also feel anxious, making them wonder what might pop out or grab them in the dark.

For fans of older horror films, they’ll enjoy Wan’s take on the giallo subgenre. As the murders occur, Wan makes sure they are some of the goriest and gruesome scenes people have seen in years. And you can believe that no ounce of fake blood was spared. As the movie starts to uncover pieces of our protagonist’s past slowly, there’s more of a focus on Madison’s repressed childhood trauma, and that’s when the film begins to pick up its momentum. Wallis is solid throughout the film, but she digs deep into her character during this portion. There’s fear behind her eyes, enough to make you afraid of what will be revealed.

When Wan tells us the secrets behind the many mysteries in the movie, audiences will have to give him credit for going in a direction they may not have totally expected, even if it’s an extremely wild choice. However, once that’s out in the open, the film’s ending decides to go off the rails. The violence is over-the-top, and the situations are ridiculous, such as what happens in a female holding cell. For a film that was building itself up so well, the action at the end is so corny. However, credit must be given to contortionist dancer Marina Mazepa, who brings life to Gabriel and provides extremely unsettling imagery during each of the action scenes. It’s almost as crazy as the Olga scene from Luca Guadagnino’s “Suspiria.”

“Malignant” doesn’t have the possessed dolls and ghosts that fans of the horror director are used to, but Wan still finds ways to make viewers’ skin crawl and keep them entertained, even if it’s a bit ridiculous at times. Wan’s directing style is a highlight as he puts viewers right in the middle of the action, and Wallis takes us on quite the wild ride. But the ending totally brings down the movie, which started so strong, as it goes crazy with the action. Nonetheless, giallo fans will have a new film they can watch filled with lots of gore and all the black gloves they need.