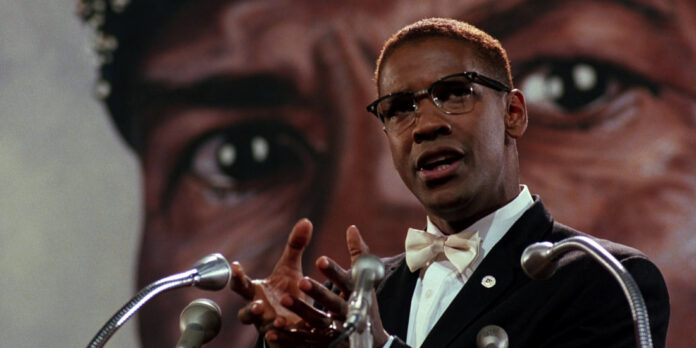 ​THE STORY – A tribute to the controversial black activist and leader of the struggle for black liberation. He hit bottom during his imprisonment in the ’50s, he became a Black Muslim and then a leader in the Nation of Islam. His assassination in 1965 left a legacy of self-determination and racial pride.​
​
THE CAST – Denzel Washington, Angela Bassett, Albert Hall, Delroy Lindo, Spike Lee & Al Freeman, Jr.

The historical biopic is one of the most cliched genres in Hollywood. In an effort to please fans of a given figure, screenwriters will churn out sanitized, simplified stories that undercut real-world significance and emphasize melodrama. They often feel like passionless exercises, or worse, blatant attempts to land Oscar nominations.

This broadly applicable set of criticisms is what makes “Malcolm X” such an incredible achievement. It’s a film that eschews all of the biopic genre’s bad tendencies for a passionate, emboldened, and vibrant viewing experience. There are familiar tropes and story beats that recur throughout the film, but director Spike Lee is able to enliven them with an intimacy that makes them feel wholly original. The result is one of the strongest depictions of a historical life ever put on screen.

“Malcolm X,” tells the story of the controversial civil rights leader of the same name. The film spans his life’s duration, from his incarceration and conversion to Islam to his tragic assassination at the hands of his own followers. The film also serves to nullify the perception that Malcolm (Denzel Washington) condoned & encouraged violent protest in the African American community. Instead, it chooses to paint a nuanced portrait of a man who struggled with his own perception of equality and who navigated the chaos of the civil rights era with a conviction that ultimately cost him his life.

This is, admittedly, a lot to tackle in a single film. Most directors would have simplified Malcolm’s character and condensed certain historical events to allow for a shorter run time. Still, Lee’s desire to do justice to the man’s life makes for a whopping three and a half hour epic that leaves no stone unturned. This all-encompassing approach may be daunting to newcomers, but the sheer breadth of storytelling & craft on display is tough to ignore.

The film is divided into three acts, with the first detailing Malcolm’s troubled early life. We see his transformation from a thoughtful boy to a bitter and violent young man who lashes out through criminal acts. He lies, he cheats, and in one chilling scene, he forces a game of Russian Roulette upon a boastful member of his crew. These actions are totally at odds with the Malcolm X persona, and Lee highlights this contrast to emphasize the character’s sense of displacement. He’s a lost soul, and were it not for his being sent to prison; he may have never found his path.

Some have criticized the length of the first act in contrast to the other two, but I’d argue that it is crucial to the film’s success as a whole. By spending so much time with the character in his rebellious youth, we come to understand his worldview and his turmoil. Malcolm Little (his original surname) is not the mythic figure that Malcolm X becomes, and by aligning us with the former, Lee is ensuring that we are emotionally invested.

Denzel Washington is absolutely breathtaking in the title role. He effortlessly taps into the man’s rugged charisma in his youth, but more importantly, he sells the change that Malcolm undergoes in prison. His tutelage under Baines (Albert Hall), a member of the Nation of Islam, reaches its apex in the scene where he rifles through a dictionary to compare the meanings of the words “white” and “black.” The editing, combined with the actor’s quiet moment of realization (few actors convey the learning of information as well as Washington), makes for a goosebump-inducing scene.

Washington’s performance, and the film as a whole, reach another level when Malcolm is released from prison. His rise to fame as a member of the Nation of Islam is depicted through masterful recreations of the character’s real-life sermons. Washington perfectly nails the cadence and unique speech pattern of Malcolm X, to the point where his brief appearance on a black-and-white TV screen could be mistaken for the real deal.

The ensemble around Washington is similarly impressive. Angela Bassett is superb as Malcolm’s wife Betty Shabazz, and though she’s relegated to the stereotypical “wife” role as the film progresses, her presence is such that she never leaves our mind. The couple’s first date is a nice moment of levity in an otherwise stern film. Delroy Lindo and Albert Hall rattle off two of my favorite performances in the film, and they’re worth mentioning together because they both represent semi-father figures for Malcolm. Both men fall out with Malcolm, but the impression they leave on him (one criminal, one biblical) informs his later decisions. Lindo’s final scene is particularly affecting, as it illustrates a path Malcolm could have easily gone down himself.

Lee’s directorial style is the equivalent of Malcolm’s diction: precise, flamboyant, and endlessly compelling. His staging of the famous police station scene, where Malcolm utilizes peaceful protesters to free an innocent man, is meant to evoke the breadth of epics like “Lawrence of Arabia” (1962). It succeeds with room to spare.

Malcolm’s journey to Mecca brings about a change in aspect ratio and color that directly links to the Technicolor spectacle of “Spartacus” (1960). That’s to say nothing of the massive musical number or the deceptively lengthy tracking shot that opens the film.

Lee’s instincts as a storyteller also help to distinguish “Malcolm X” from its biopic peers. The screenplay, which Lee wrote with Arnold Perl, is a masterclass in characterization & exposition without sacrificing a given scene’s dramatic impact. The Nation of Islam’s inner workings could have been tricky for another director to communicate, but Lee keeps things lean and concise. This is particularly crucial when Malcolm falls out with the Nation and suspects that his life may be in danger. The script’s sturdiness allows Lee to ratchet up the paranoia without having to blandy summarize the stakes.

The film’s best sequence is perhaps its most famous. Malcolm, knowing his days are numbered, heads to church to deliver a sermon. Sam Cooke’s civil rights anthem “A Change Is Gonna Come” scores his drive to the church, and the sequence culminates with Lee’s signature dolly shot. It’s one of the most powerful marriages of sound and picture ever captured on screen. Given the song’s historical context (Cooke, who was friends with Malcolm, also died young), it packs an overwhelming emotional punch. It’s as though Lee is giving us time to say goodbye to Malcolm before his death.

The prologue and epilogue serve to highlight how influential Malcolm has become since his passing and how prophetic his words were in regards to racism. The decision to use footage of the Rodney King incident gives the film a timelessness and a certain amount of relevance that supersedes Malcolm’s lifetime, as does Nelson Mandela’s footage and the narration by Ossie Davis (who gave the eulogy at Malcolm X’s funeral). They compound the film’s importance and serve as perhaps the greatest endorsement of Lee’s talent for bringing people together.

“Malcolm X” is a masterpiece, plain and simple. It represents Spike Lee’s apex as a filmmaker, the peak for Denzel Washington as an actor, and the career highlight for the rest of the actors and artists involved. It’s a nod to Hollywood epics of the past and a heartfelt tribute to one of the most notable black figures in American history. It’s a story that remains startlingly vital, both socially and artistically. It’s a film you should rewatch as soon as possible.