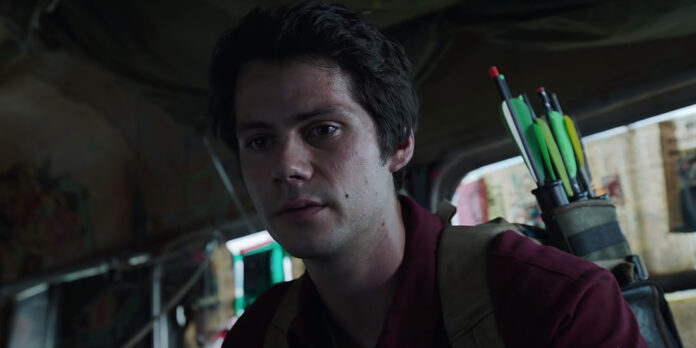 THE STORY – Seven years after the Monsterpocalypse, Joel Dawson, along with the rest of humanity, has been living underground ever since giant creatures took control of the land. After reconnecting over the radio with his high school girlfriend, Aimee, who is now 80 miles away at a coastal colony, Joel begins to fall for her again. As Joel realizes that there’s nothing left for him underground, he decides to venture out to Aimee, despite all the dangerous monsters that stand in his way.

​​​I like fun! Do you like fun? Well, I have good news for you. “Love and Monsters” is fun! But beyond just being an enjoyable time, this sci-fi/adventure packs enough heart to be just as substantive as a movie like this can hope to be.

The apocalypse has happened, and the small percentage of humanity that survived it isn’t doing too well. Thanks to the chemical fallout after a large asteroid was blown up by our rockets (it’s a long story), cold-blooded animals have mutated into gargantuan, monstrous versions of their former selves and begun killing the people that so happily squashed them in the past. Our few remaining humans have mostly sequestered themselves into bunker-based colonies, only venturing out onto the surface when absolutely necessary. Seven years into this hellscape world, Joel (a winning Dylan O’Brien) decides he’s had enough of underground living and decides to venture out to reunite with his long-lost girlfriend Aimee (Jessica Henwick), monsters be damned.

The film wisely keeps its view of its end times-set world small and focused on our main characters. In fact, besides our hero Joel, there’s only a handful of characters of importance, including Aimee and a roving duo of survivalists whom Joel encounters named Clyde (Michael Rooker) and Minnow (Ariana Greenblatt). This allows the audience to become completely invested in Joel’s quest. Joel himself is a fully-formed creation, with wants, needs, and weaknesses all well established by the screenplay. And his character’s literal voice is strong, with snappy dialogue that doesn’t grate. It also helps to give him a lovable dog sidekick named Boy. Their bond is so apparent from their very first meeting, and it’s hard not to root for the two of them.

While Joel never comes across as irritating, even in how self-aware his narration is, it does at times feel like the screenplay feels the need to dip into world-weary dialogue that calls to mind the less-inspired instances of screenwriting in the Marvel Cinematic Universe. Thankfully, these moments are mostly relegated to the expository introduction. It can’t help but feel like a studio-mandated addition to this otherwise sincere and heartfelt comic adventure, but maybe that’s just wishful thinking on my part. One other thing that stuck out to me is the exclusively heterosexual pairings in this romance-focused movie. Joel clarifies that he’s one of the only single people in his bunker, as the apocalypse has made people much more eager to find their apparent soul mates. A few quick, humorous glimpses of said couples canoodle with abandon, and almost surprisingly, they’re all straight couples. I just find it hard to believe that in a post-societal world in a fairly well-populated bunker, there wouldn’t be some same-sex pairings.

The titular monsters are consistently impressive and intimidating. It’s easy to see why this film nabbed a somewhat surprising Oscar nomination for Best Visual Effects. We aren’t inundated and overwhelmed with monsters at all times; instead, the film smartly keeps Joel’s encounters to singular set pieces, meaning the creatures are allowed to be deliberately viewed in their full, horrifying glory. Their designs are smart and detailed, perfectly showing where nature and disaster collided. They also all have significant weight to them, literally and figuratively, meaning that it’s always believable that our characters are interacting with them. Every time a new monster showed up, I was enthralled.

Despite some moments of requisite blockbuster screenwriting, “Love and Monsters” is an enjoyable adventure with heart. And I really can’t say enough about the creatures that Joel encounters. I love the monsters in “Love and Monsters,” and the humans aren’t too bad either.