Looking Back On “Who’s Afraid of Virginia Woolf?” 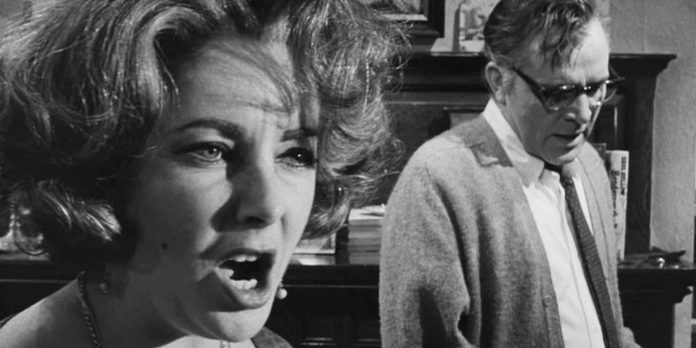 ​We all know that Netflix is not the place to go if you’re looking for older movies. They seem to have an aversion to any film from before 1985. So imagine my surprise when I saw that just a few weeks ago they added “Who’s Afraid of Virginia Woolf?” to their rotation! Mike Nichols’s masterpiece was made all the way back in 1966, so I never expected to see it on a streaming platform that seems to be more interested in functioning as a “Friends” re-run machine than as a way to expand peoples’ film knowledge (and I say this as a fan of “Friends”). While it’s available for however long it is on Netflix, I thought this might be a good time to do a little overview of this film’s importance and impact on the film industry.

Edward Albee’s play, which the film is based on, opened on Broadway in 1962 and was immediately both successful and controversial. Its beyond-frank exploration of an older couple’s blistering and abrasive marital antics, all under the haze of alcohol, was deemed so shocking that the Pulitzer Prize committee rescinded its award for Drama that it had briefly bestowed upon the play. Being such a hot property, it wasn’t long before Hollywood came calling. What better way to sell such an intense movie than by casting arguably the most intensely-followed couple of the day: Elizabeth Taylor and Richard Burton? Director Mike Nichols (in his film directing debut) expertly used the audience’s preconceived notions about the famous couple to make their characters’ explosive moments and bitter contempt for each other even more horrifying and surprising. And in his adaptation, screenwriter Ernest Lehman did not cut much of the vulgarities and content which had made the play such a talking point. Of course, this being the mid-60s, this did cause them to run into a bit of trouble.

In 1966, the MPAA did not use the same rating system that we have in place now. The Production Code, colloquially know as the “Hays Code”, was used to censor any film that did not meet their standards of approval. By the 1960s, plenty of films had pushed the boundaries of these rules and were still given the Code’s seal of approval or, even more daring, would not be granted approval but would still be released by their distributors (Sidney Lumet’s “The Pawnbroker” faced this dilemma in 1964, before eventually being granted an appeal by the MPAA). By the time “Who’s Afraid of Virginia Woolf?” was being prepared for release in 1966, the Production Code had been severely weakened thanks to the MPAA’s bending of its own rules in the face of changing times and tastes. Even with its intensely mature language, “Woolf” was given an approval rating by the MPAA. It is partially thanks to this film that in 1968, the MPAA would go on to create the rating system we know today. Without the nearly final blow that this film (and Michelangelo Antonioni’s similarly-controversial “Blow-Up”, released the same year) dealt upon the Production Code, it is quite possible that we would have had a longer period of puritanical film censorship.

​When the film was released it was a hit, both critically and commercially. When the time for Oscars rolled around, the film received a whopping 13 nominations, which is extra impressive considering that it is a small, intimate story set mostly in one building. Huge nomination tolls like that are usually reserved for massive films with lots of big technical achievements. It also has the distinction of being one of the rare films that was nominated in all categories which it was eligible for (the other film being “Cimarron”) including 4 acting categories, which means that practically the film’s entire cast (excusing two extremely minor, uncredited characters who barely have any screen time) was Oscar-nominated. And two of them would go on to win: Elizabeth Taylor earned her second Best Actress trophy that decade and Sandy Dennis won Best Supporting Actress. The film would also win three other awards on Oscar night (Cinematography, Art Direction, and Costume Design, all in the black-and-white categories) but would ultimately lose most of its top prizes to “A Man For All Seasons”. It is safe to say, however, that “Woolf” has had a greater legacy and impact than “A Man For All Seasons”, with Taylor’s Best Actress win frequently cited as one of the greatest in its category (an opinion that I happen to agree with).

If “Who’s Afraid of Virginia Woolf?” is still on your watch-list, or if you’ve seen it before and want to revisit the fascinating, depressing, hilarious, and crushing world of George and Martha, give it a spin on the old Netflix. Who knows? Maybe if enough of us watch it, the almighty algorithm will deign to grant us access to more films that were made before the Reagan administration.

Have you seen “Who’s Afraid of Virginia Woolf?” yet? If not, do you have a Netflix account? If so, check out this masterpiece of cinema, head back over here to the comments section and let us know what you thought of the film.