“LET THEM ALL TALK” 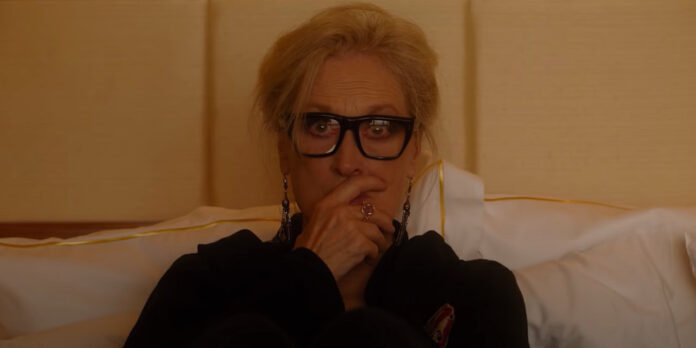 THE STORY – A young man finds romance with a literary agent while taking a trip with the woman’s famous aunt and her friends.

​An aging Pulitzer Prize-winning novelist, working on a new manuscript, brings two old friends and her nephew with her on the Queen Mary 2 on her way to receive an award in England. Also on the ship are her literary agent, on a mission to find out anything she can about the manuscript, a famous author of mystery novels, and a mysterious man who may or may not be having an affair with our dear novelist. Hijinks ensue! Or not. Steven Soderbergh’s latest experiment, filmed on an actual Queen Mary 2 crossing shortly before the COVID-19 pandemic with only a script outline, is one well-appointed bore of a film. With nothing interesting to say about any of the themes it plays with and only mild chuckles to offer in the way of comedy, “Let Them All Talk” is an endurance test for actressexuals everywhere: Just how much are you willing to sit through to watch Candice Bergen, Meryl Streep, and Dianne Wiest act with each other?

Granted, these three legends are not in any way the problem with the film. Well, maybe a little. While all three are always a delight to see in anything, by this point in her career, one has to wonder if Streep is finally scraping the bottom of her bag of tricks. Her performance here, while as psychologically astute as always, feels like a typical latter-day Streep performance: Swanning about in glamorous loose-fitting clothing and tossing off half-mumbled bon mots with a wave of her hand. There’s also lots of “actorly” business with anything that she can physically get her hands on. It’s so typical, in fact, that it almost feels like a parody of a Meryl Streep performance. For their parts, Bergen and Wiest do a commendable job of mixing humor and pathos in their investigation of long-estranged characters who have not ended up where they thought they would. Wiest has one great moment that is sure to be memed to death, and Bergen’s reaction shots are fantastic. These women are all but incapable of turning in an outright bad performance. Still, without scripted dialogue, they’re unable to turn any of these women into characters we can care about, much less want to spend time with.

The less said about the other performers, the better. Gemma Chan is completely at sea, not helped at all by being forced to spend most of her screentime with Lucas Hedges, who gives a performance so lacking in charisma and honesty that it’s hard to believe he’s the same actor who felt so painfully real in “Manchester By The Sea.” Here, he’s just painful to watch as the kind of hipster millennial whose entire persona is based around not seeming to care about anything. Every moment he spent on screen felt like a waste of precious time in a film that works very hard to give the impression of a light, breezy comedy but is actually a plodding, overlong bore.

Unfortunately, the film’s flat boringness has to be laid at the feet of Soderbergh, the director. Soderbergh, the editor, has a sharp eye for how to cut comedy, and the very Soderbergian montages of the inner workings of the ship are an oasis of interest in the desert of the rest of the film. Soderbergh, the director, on the other hand, seems to have confused “handsomely-appointed” for “well-made” – “Let Them All Talk” never looks anything less than fantastic, taking full advantage of the classy interiors of the ship to create some well-composed, flatteringly-lit shots. But even his fleetness as an editor can’t do anything to liven up these dialogue scenes, endless death marches of faux-literary dialogue that wear out their welcome well before the film’s halfway point—learning that the actors were only given a plot outline and had to improvise their lines makes sense in retrospect, as their dialogue feels like an approximation of “serious film dialogue” instead of the real thing. This experiment’s unfortunate side effect is that it puts the film in the curious position of almost feeling like a satire of this sort of serious drama about wealthy intellectuals and their problems.

Sadly, the film is not a satire, which means that the tone throughout is muddled. The story is also quite deliberately hiding certain important plot points for late-film reveals, which means that it’s hard to tell where the film is going and what the point of it all is. When we do finally get to the end, and all the film’s secrets are out in the open, it’s hard not to feel like you’ve been duped. The end is a big nothing, with no lessons for the audience, nor any real arc for the characters. They may have gone on a journey across the Atlantic Ocean and back, but everyone ends the film more or less the same as they were when they started. When the journey is this staid and strenuous to watch, you need to make the audience feel like it was for something – like it was worth sitting through all that. Instead, “Let Them All Talk” makes the audience feel like maybe everyone involved should have just stayed silent.