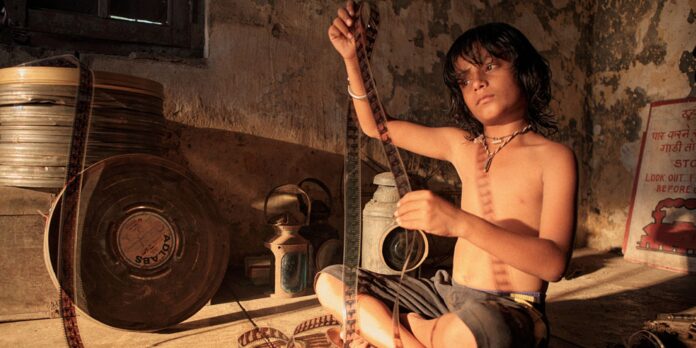 THE STORY – When the magic of movies conquers nine-year-old Samay’s heart, he moves heaven and Earth in pursuit of his 35mm dreams. However, he is unaware of heartbreaking times that await him.

A young boy goes to the movies for the first time with his parents and is a little nervous about what might be awaiting him inside. After all, for him, a movie theater is a place about which he’s only heard of. Once the projector revs up and the light hits the screen, though, he is utterly mesmerized by the images he sees, entranced with visuals that transport him to a place he never before knew existed. From that moment on, his world is changed forever.

Pan Nalin’s memory piece is yet another “love letter to cinema,” a genre where directors reflect back on their childhoods and what made them fall in love with the movies in the first place. While such films can be annoying and self-indulgent at times, they can also produce works of great beauty. Whether it’s through Spielberg’s hero Sammy or Nalin’s Samay, seeing that first film experience through the eyes of a child can take us all back to our own stories, and “Last Film Show” does just that with grace and style.

Nine-year-old Samay (a wonderfully natural Bhavin Rabari) is taken by surprise when his father, Bapuji (Dipen Raval), announces that he’s taking the entire family to town to see a movie. After all, Dad has called moviegoing beneath the honor of this family, but he’ll make an exception today because it’s a religious movie. No matter. Once inside, Samay is hooked from the start by the beauty of the light, and he sets out to play hooky from school and sneak into the cinema as often as he possibly can.

Not surprisingly, after several visits, Samay is caught by the theater manager, tossed out, and banned from ever returning. Dejected, he strikes up a conversation with the theater’s projectionist Fazal (a delightful Bhavesh Shrimali), who agrees to let Sammy watch the movies from his projection booth in exchange for his delicious-looking lunch, packed daily by his mother, Baa (Richa Meena). Not a bad deal for Samay, who soon experiences the life of a projectionist, learning how to rewind the massive reels of films and even edit them.

Unlike several other love-letters-to-cinema in recent years, one of the most distinguishing features of “Last Film Show” is its sense of time and place — in this case, India in the early 1990s. And it’s not just India, but the poorest parts of that country where existence is difficult, and the burden of poverty is all-pervasive. The country’s rigid caste system is always present, bringing a particular shame to Bapuji. Born into a well-to-do Brahmin family, he was swindled out of his share of the family’s estate and is now reduced to selling chai to traveling passengers at the local train station. His shame even extends to his parenting — any sign of Samay’s desire to rise above his class to become a filmmaker is met with ridicule by his father, and the boy’s clandestine trips to the cinema result in brutal beatings at his hands.

On the other hand, like Mitzi Fabelman, Samay’s mother, Baa harbors her own artistic inclinations, which she quietly channels into the culinary creations she creates for her son’s lunch. Her preparation of the family’s meals is celebrated in fascinating detail, and the final product is photographed so gorgeously by the cinematographer Swapnil S. Sonawane that it would make any food stylist green with envy.

Nalin holds off until the third act of “Last Film Show” to reveal the identity of the film’s real villain, the encroaching specter of digital projection. As film technology upgrades how movies are shown, the era of 35-millimeter projection becomes a thing of the past. Projectors are hauled away, reels of celluloid are carelessly discarded, and the romance of the physical detail of threading and screening a film that “Last Film Show” has so artfully evoked is suddenly no more. The twist spins the film in a new direction with somewhat mixed success.

The impact of the transition to digital certainly lands hard, both on the characters — Fazal, for example, who cannot speak English and knows nothing about computers and is suddenly out of a job — and on the film lover in us as well. In a lengthy sequence in which the theater’s equipment is dumped, Nalin creates a number of images that linger in the audience’s mind, including a dreamlike slo-mo shot of Samay jumping into what looks like a mountain of celluloid that I won’t soon forget.

Not all elements, however, work quite as well. There is a key moment, for example, when Samay explains to his father that his goal is to grow up and study light “because from light come stories and from stories come movies.” It’s a beautifully written passage, but that’s the problem — it feels beautifully written. This is Nalin speaking, not a poorly-educated nine-year-old boy, and the verisimilitude that the film has worked so hard to create is temporarily shelved in favor of delivering a number of lofty ideas. Similarly, scenes of now-unwanted 35mm film being melted down to make cheap trinkets are depicted as being the fate of works by Kubrick and Kurosawa, a point delivered with a sadly heavy hand. Worse, the motivations of several characters turn on a time in order to facilitate a happy ending, an unfortunate stumble so close to the finish line.

Still, with “Last Film Show,” Nalin has created a small jewel box of a film that is less a love letter to cinema than it is a Valentine to the joys of watching a 35mm film. I suspect that Quentin Tarantino would approve.

<b>THE GOOD - </b>Director Pan Nalin has created a small gem of a film that is less a love letter to cinema than it is a Valentine to the specific joys of watching a 35mm film.<br><br> <b>THE BAD - </b>The film's third act gets a bit heavy-handed at times in its messaging and runs the risk of evoking "love-letter-to-cinema" fatigue.<br><br> <b>THE OSCARS - </b>None<br><br> <b>THE FINAL SCORE - </b>7/10<br><br>"LAST FILM SHOW"