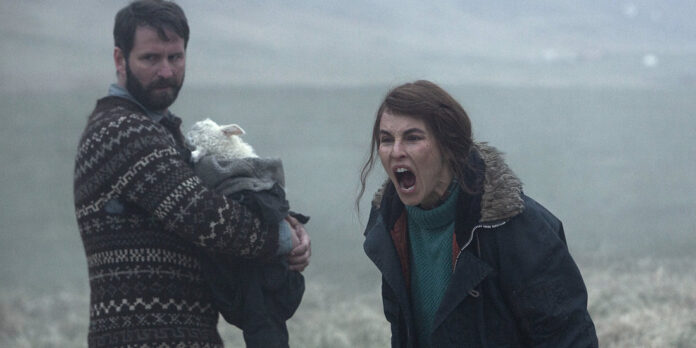 THE STORY – In rural Iceland, a childless couple discover a strange and unnatural newborn in their sheep barn. They decide to raise her as their own, but sinister forces are determined to return the creature to the wilderness that birthed her.

​​​What does it mean to be a mother or father? Looking at it in conventional terms, it means giving birth and raising children, providing for them, and loving them unconditionally. But being a parent isn’t so black and white these days. Whether one gives birth to a child, adopts, or has a furry creature, being a mother or father comes down to showing love and happiness to whoever you have in your life. In Valdimar Jóhannsson’s feature film debut “Lamb,” a couple experiences all the highs of raising their little miracle until things come crashing down.

The film opens up on snowy terrain where one can hear, but not see, something breathing heavily, but whatever it is, it’s enough to scare a herd of horses away. Once it approaches a farm, it enters a barn where sheep are huddled together. One of them walks out of their pen and collapses.

After the storm clears, audiences can see that life in the rugged Icelandic wild seems idyllic for María (Noomi Rapace) and Ingvar (Hilmir Snær Guðnason). Surrounded by stunning snow-capped mountains, they tend to their sheep, enthusiastic dog, and sassy cat, all while living a quiet life. But there’s a sadness that can be felt, which we later learn that the couple is dealing with a loss. When Ingvar reads in a newspaper that time travel is deemed theoretically possible but that he’s not ready to see the future, María chimes in that going back in time would be an option. Later, when we see Ingvar take out a crib from storage, it’s easy to assume what time these two would likely go back to.

But life goes on, and for these two and their sheep, it’s lambing season. One day, one of their sheep gives birth to what initially appears to be a delicate white lamb, but there’s something about this one — the camera won’t show us what initially — that makes the two take it in and raise it. Gradually, we see that this lamb, who they name Ada, has a sheep’s head and the body of a child. But that doesn’t phase María and Ingvar, who find themselves living in pure bliss, aside from Ada’s sheep mother constantly bleating outside the home, desperate to be reunited with her child.

The happiness is interrupted and almost ended when Ingvar’s brother and “black sheep” Pétur (Björn Hlynur Haraldsson) returns to stay with the family. If viewers were questioning whether María and Ingvar saw the same creature as we were, Pétur’s confused looks and cruel actions reassure us that, yes, what we’re seeing on screen is actually what’s on screen. At one point, Pétur asks Ingvar, “What the fuck is this?” which is likely what we’d all ask him. Ingvar’s response: “Happiness.” But a confused brother/brother-in-law becomes the least of this couple’s concerns when Jóhannsson shows us more of what he’s been hiding from us regarding how Ada came to be.

Jóhannsson does a stellar job of going at a meticulously slow pace and revealing only bits of information at a time. It might drive us a bit crazy at times — desperately making us want to see Ada’s full body and what is lurking outside in snow storms — but the payoff is rewarding. It also adds the right amount of suspense to this film where, generally, there’s very little going on in these characters’ lives. Praise also has to be given to Rapace and Guðnason, who put so much emotion into their quiet performances. As they go through familiar motions of sowing seeds and taking care of their animals, there’s an emptiness behind their eyes that they convey through glances, minimal conversation, and timid facial expressions. Once Ada enters their lives, their love for the newborn becomes infectious (it took ten human actors, two puppeteers, and multiple visual effects professionals to bring Ada to life, making the couple’s performances even more impressive).

It’s also worth noting that sound is very effective in this film. From the heavy breathing at the beginning of the film to the ample animal noises that fill up the barn, the sound is another way that suspense is added in the film and is quite unsettling at times. And if there were an Oscar for best animal performance, the sheep would easily be the winners this year. Their expressions and movements made them seem like they were made to be actors.

However, what “Lamb” lacks is a more developed script or one that provides more drama and tension. It’s a generally light story about this family that does have some roadblocks here and there but overall has it pretty easy. Ada’s sheep mother pesters the family, and Pétur momentarily breaks up the bliss, but these problems are all too quickly resolved. Once they move on from these issues, the film lacks any bit of tension and becomes repetitive, especially when Jóhannsson overuses wide shots of the Icelandic countryside. The ending does a great job of shocking viewers, but having a stronger lead-up would have made it even more effective.

Valdimar Jóhannsson masters pace and tone to keep viewers guessing, but his feature-length debut lacks the right amount of tension throughout to really pack a punch in the end. Rapace and Guðnason, however, give strong performances that carry a lot of emotion and weight with them. Though the trailer may make it seem like a horror movie, “Lamb” is more of a heartfelt folktale that shows the love that people are willing to give.