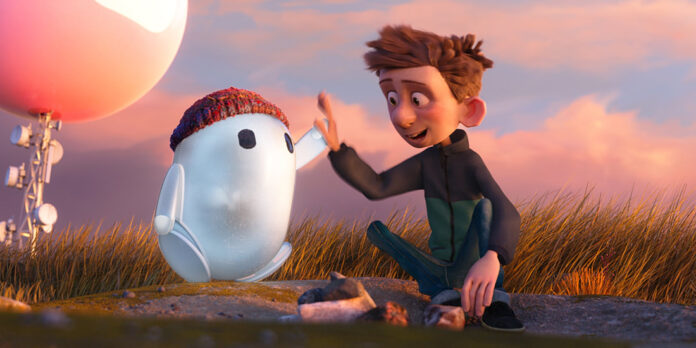 THE STORY – “Ron’s Gone Wrong” is the story of Barney, a socially awkward middle-schooler and Ron, his new walking, talking, digitally-connected device, which is supposed to be his ‘Best Friend out of the Box.’ Ron’s hilarious malfunctions set against the backdrop of the social media age, launch them into an action-packed journey in which boy and robot come to terms with the wonderful messiness of true friendship.

​​Cinema that comments on our culture’s – and, specifically, children’s – addiction to technology is nothing new. From big-budget blockbusters like “The Matrix” or “Ready Player One” to huge animated hits like “WALL-E” or this year’s “The Mitchells vs. The Machines,” this is thematic territory that has been tried time and time again. So, what exactly makes Disney/Fox’s “Ron’s Gone Wrong” – the latest addition to this subgenre of sorts – stand out? It helps that the film comes with an out-of-this-world voice cast (Zach Galifianakis, Jack Dylan Grazer, Ed Helms, Olivia Colman, and Rob Delaney, among others). Still, after being delayed an entire year due to concerns relating to the ongoing coronavirus pandemic, it’s always possible that its themes may not feel as timely as they would’ve been twelve months ago. And, truth be told, there isn’t much in “Ron’s Gone Wrong” that feels all that fresh from a story standpoint, but the clever comedy and charming central relationship between Grazer’s Barney and Galifianakis’ titular rambunctious robot Ron make the film an enjoyable watch regardless, especially for younger audiences (who will no doubt be endlessly amused by all these robot-related antics).

In the era in which “Ron’s Gone Wrong” takes place, an Apple-esque corporation called “Bubble” has redefined technology as we know it, and this innovation isn’t over, as their latest invention – the “B-Bot” – is set to take the world by storm. As walking, talking, and WiFi-accessible robots, they can do practically anything a smartphone can (connect you to social media, capture photographs, and pull up countless video games to play), but they also function as surrogate friends, potentially providing youngsters with all the personal interaction they’d ever need in place of actual human communication. However, since his family – consisting of absent-minded father Graham (Helms) and delirious grandmother Donka (Colman) – is unable to afford a B-Bot, socially awkward middle-schooler Barney (Grazer) is the “odd man out” at school, with no one to converse with since his classmates are all so caught up in their tech. However, when the opportunity arises to buy Barney a “slightly” banged-up B-Bot at a reduced price for his birthday, Graham and Donka jump at the chance, wholly unaware that this bot’s coding is a bit messier than they could’ve ever imagined, much to Barney’s dismay. And yet, an unconventional B-Bot might just be what the world needs, as Ron (Galifianakis) helps Barney realize that real friendship can’t simply be “programmed” and connection is more than a computer code.

While there are a lot of common concerns that are considerately addressed in “Ron’s Gone Wrong” – related to our overdramatic dependence on technology and our inclination to use it to replace “real-life” communication – they feel rather surface-level much of the time, which likely won’t rub kids the wrong way but prevents this picture from ascending to the level of more mature animated movies that center around these topics, such as the aforementioned “The Mitchells vs. The Machines.” It’s admirable that “Ron’s Gone Wrong” tries to also touch on modern issues like the Internet’s ability to ruin an individual’s life when one photo or post gets spread around and can’t be stopped. Still, it often undercuts this maturity with a sillier scene that follows and spotlights scatological humor or cliché pop-culture gags. Additionally, when a film has a fairly predictable plot as this – with the conclusion laid out from the start – the less time it takes a movie to get to its finale, the better. Sadly, in “Ron’s Gone Wrong’s” case, it takes a few detours en route to this resolution that delays its more meaningful denouement and merely pads its runtime.

Thankfully, despite these few structural stumbles, “Ron’s Gone Wrong” succeeds where it matters most by creating compelling characters that transcend the film’s more stereotypical trappings. Simply put, Barney and Ron are sure to be instant fan favorites, arriving with fully formed personalities that cleverly contrast with protagonists of animated films from the past (despite the obvious similarities to a pairing like Hiro and Baymax from Disney’s “Big Hero 6,” for example). Barney is simultaneously a stand-in for all social outcasts and a singular individual with his own wants and worries, and his search for self-confidence is compassionately characterized. With that being said, it’s Ron who most definitely steals the show here, not only just because of Galifianakis’ vibrant voice work but also because of the brilliantly hilarious beats the script (written by co-director Sarah Smith and “Borat’s” Peter Baynham) affords this bot – beats that rise above the more juvenile humor found elsewhere and offer amusement to all ages. Still, he’s never better than when he’s bouncing off of Grazer’s Barney, as their diverting dialogue is an utter delight, particularly when it comes to the obstacles caused by Ron’s incomplete coding (calling Barney by the wrong name, feeling that “friend requests” are literal, etc.).

The rest of the voice cast delivers equally effective work, but only Olivia Colman’s Donka – Barney’s riotous Russian grandmother – comes close to matching their comedic success with her distinctively idiosyncratic demeanor. Helms is fine but underused, while Kylie Cantrall and Ricardo Hurtado (playing two of Barney’s classmates/companions) do the most with underwritten roles as a self-obsessed middle school influencer and provocative prankster, respectively. Justice Smith is sweet (if sidelined) as the charismatic creator of the B-Bots. At the same time, Rob Delaney tears through his corrupt corporate talk as Bubble’s felonious financier with glorious glee, even though a lot of these one-liners can feel a bit corny. Still, through it all, Barney and Ron shine so brightly that their relationship single-handedly makes “Ron’s Gone Wrong” worth a watch despite the film’s occasional inability to meet their magnetism. The commentary here on our reliance on technology is pretty standard as far as these critiques go (as is the ultimate lesson that Ron’s focus on forming a bond with Barney instead of simply supplying him with content is the “proper” way a B-Bot should behave), but if you find yourself captivated by these characters and their considerable chemistry, it’s almost impossible not to leave the film with a smile on your face.