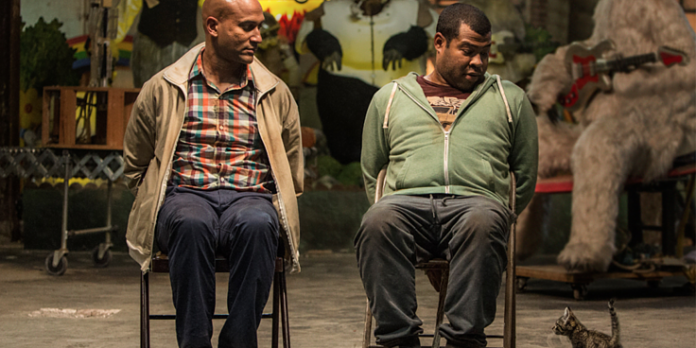 THE STORY – Recently dumped by his girlfriend, slacker Rell (Jordan Peele) finds some happiness when a cute kitten winds up on his doorstep. After a heartless thief steals the cat, Rell recruits his cousin Clarence (Keegan-Michael Key) to help him retrieve it. They soon learn that a thug named Cheddar (Method Man) has the animal, and he’ll only give it back if the two men agree to work for him. Armed with guns and a gangster attitude, it doesn’t take long for the hapless duo to land in big trouble.
​
THE CAST – Jordan Peele & Keegan-Michael Key
​
THE TEAM – Peter Atencio (Director), Jordan Peele & Alex Rubens (Writers)

I love “Key & Peele.” I love their segments and their on-air chemistry with one another. Their first feature film together “Keanu,” is much like their sketches on Comedy Central. The teamwork between the two comedians is unparallel, but some laughs land better than others. While the small scale situations for their sketches work well with a minimal amount of screen time, here they stretch what is ultimately a one-joke sketch into an entire hour and a half film, with a cute kitty to boot. The results are somewhat mixed, despite the amount of laughter your body will exude.

​After going through a serious breakup, Rell (Jordan Peele) has given up and is in a state of despair. His good friend Clarence (Keegan-Michael Key) does his best to cheer him up but it’s not until Rell discovers a runaway kitten which he names Keanu, that his life starts to change for the better. Completely infatuated with Keanu, all seems to be going well until one night Rell and Clarence come back to Rell’s apartment, only to find the place trashed and Keanu missing. After receiving a tip from his next door drug dealer Hulka (Wil Forte), Rell and Clarence set off into a dangerous world of gang members, drug dealing, and violence. In order to “fit in,” they must shed their normal personalities and insinuate themselves into the gang by whatever means necessary in an effort to get Keanu back from the vicious gang leader known as Cheddar (method Man).

So is “Keanu” downright hilarious? In many parts, yes. Is it the comedy of the year? For some people, maybe. Does it use the n-word as much as “Django Unchained?” I’m not quite sure, but it certainly felt like it. The joke that constantly gets played out in the film is that Clarence and Rell are way in over their heads trying to act “hood” in a dangerous gang of thugs who sell drugs and murder people. Their politeness and in Clarence’s case, demasculinization, is constantly used again and again. And therein lies the issue with “Keanu.” It’s just another one of Key and Peele’s comedy sketches, but this time, it’s stretched out far too long. Some of the gags and setups are insanely funny and earn their laughs, such as a scene where Clarence convinces many members of the gang that George Michael is a tremendous musical talent compared to the heavy gangster music they are accustomed to. But more often than not, the clearly improvisational manner in which the scenes are acted out result in a few duds that halt the forward momentum that the film is trying to build.

And let’s pay some special attention to this kitty. Wow! What a cute little creature Keanu is. I would venture to say that the adorableness of this animal made the audience “aww” just as much as they laughed throughout the film. It’s here that the film attempts to find its meaning in finding peace through the people (And in this case, also animals) you love. I truly wish it could have been expanded upon more, as the film does fall into cliche towards the end with a series of “What the hell?!” head scratching moments. But there is no denying the effect that this tiny creature is going to have audiences.

Acting as an homage to action films (Even borrowing heavily from “John Wick” as far as its plot and title reference to Keanu Reeves) and satirizing the stereotypical modern day thug gangster, Jordan Peele and Keegan-Michael Key bring their television comedy to the big screen. The result is a film that does not always hit the marker, but when it does there may be no funnier film this year. Their brand of humor may turn off some immediately and admittedly, some jokes don’t land at all. However, “Keanu” is at the very least worth a look if not just to see the most adorable animal to ever grace the silver screen, in one of the more ridiculous plots you are to see this year.