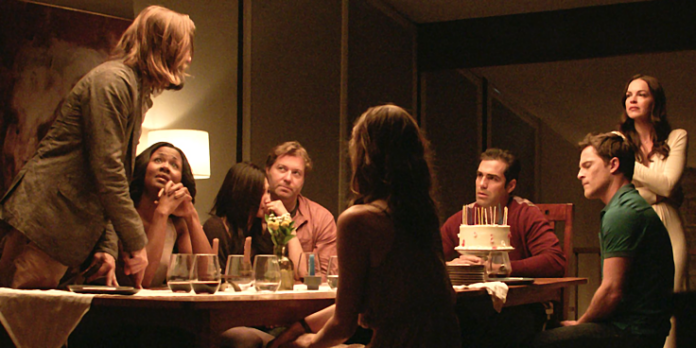 THE STORY – While attending a dinner party at his former house, a man (Logan Marshall-Green) starts to believe that his ex-wife (Tammy Blanchard) and her new husband (Michiel Huisman) have sinister plans for the guests.

The fear of death. It’s a powerful theme which might as well be the ultimate test for every human being on this Earth. How do we cope with the idea that every human being eventually dies and that one day, our time will too come? How do we continue to move on with our own lives after experiencing such devastating loss? And how do we continue to push forward with living, despite the ever looming inevitability of our own mortality? Karyn Kusama’s indie thriller/drama “The Invitation,” explores such questions within the confines of a single location, on a fateful evening where a group of friends reunites for a dinner party, with grave consequences for all involved.
​
​Will (Logan Marshall-Green) and his new girlfriend Kira (Emayatzy Corinealdi) are driving through the Hollywood Hills for a dinner party with their old friends. The party is being hosted by Will’s ex-wife Eden (Tammy Blanchard) and her new husband David (Michiel Huisman) who no one has seen in a little over two years. Will and Kira arrive to find their friends Ben (Jay Larson), Claire (Marieh Delfino), Gina (Michelle Crusiac) and gay couple Miguel and Tommy (Jordi Vilasuso and Mike Doyle) are already there. Oddly, Gina’s boyfriend Choi (Karl Yune) has not yet arrived and there are two unexpected guests at the gathering who are new friends of David and Eden’s named Sadie (Lindsay Burdge) and Pruitt (John Carroll Lynch). As the evening wears on, Will’s past trauma and uncomfortableness begin to make him suspicious of the strange circumstances surrounding the evening.

What makes “The Invitation” such a welcome surprise is the execution of its storytelling for the Will character. Kusama ratchets up the tension and awkwardness of old lovers interacting within a social gathering to a terrifying degree. It eventually reaches a boiling point where Will’s own paranoia for the evening gets the better of his own politeness and his deep, dark suspicions finally reveal themselves. Every character in the room is given a fair amount of screen time to be suspected, delved into and dissected, thus allowing for Will and the audience to make up their own minds for what is truly going on. And although screenwriters Phil Hay and Matt Manfredi, eventually do reveal the truths behind the evening, I can safely say that their intentions and thematic storytelling worked on me. I can see the other side of the argument in how a more ambiguous take would have been possibly a stronger narrative, but I don’t mind the direction that this disturbing film takes. Suffice to say, the less you can know about the film before watching it, the better.

Everyone in the very large cast does a great job of highlighting what makes them unique within this labyrinth of lies and deceit. It’s all the more remarkable when you realize the degree of difficulty the screenwriters and director put on themselves to include a large cast of characters instead of only introducing possibly four main characters into the narrative. Would the story still have worked? Maybe. But having a larger cast in such a confined setting (Don’t be fooled. The house is huge.) allows more doubt and uncertainty to creep in within the first two-thirds of this nail biting story. Logan Marshall-Green turns in one of his best performances yet as the socially awkward Will who is dealing with a long history of grief, which is being manifested on this reunion with his ex-wife. Tammy Blanchard is also convincing as the focus of the evening, Eden. She is a woman who too has been through terrible tragedy and is coping with it in her own way. It’s the clash between the two characters and their coping mechanisms which gives the film its dramatic central conflict. Also of particular note, was the ever uncomfortable yet reliable presence of John Carroll Lynch, who is known to most viewers as playing the potential Zodiac Killer in David Fincher’s procedural thriller “Zodiac.” Here he uses his simple, relatable and soft-spoken demeanor to once again throw us off as to whether or not he has cruel intentions as Will suspects.

Does the third act of “The Invitation” go off the rails? You’re damn right it does. What starts off as a simple character drama, gives away to a straight up survival thriller with a tremendous amount of intensity and thematic meaning behind its violence and carnage. Some audience members may view this as a betrayal and feel cheated by the time the end credits roll. But what will mostly stick with me is the film’s ideas on grief, death, struggle, survival, and how those themes become embodied within the film’s characters and narrative. Our own basic instincts of survival have been cast aside throughout centuries of evolution and traded up for a fake sense of civility, one which “The Invitation” comments on and literally throws out the front door.