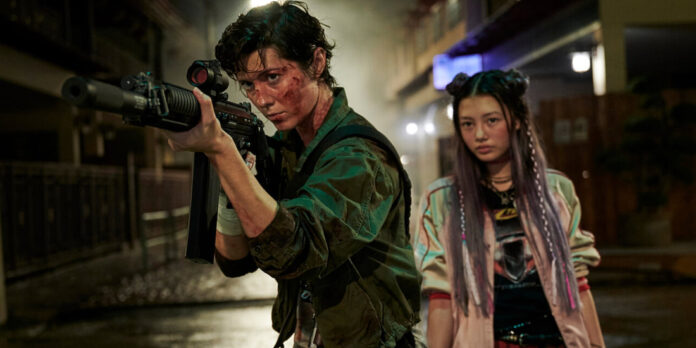 THE STORY – After she’s irreversibly poisoned, a ruthless criminal operative has less than 24 hours to exact revenge on her enemies and in the process forms an unexpected bond with the daughter of one of her past victims.

​​​It is always the ideal to watch a story unfold that entices one creatively and is executed in an innovative manner. However, sometimes one just isn’t in the mood for such endeavors. There are times when the craving for more baseless spectacle is warranted, and the joys of watching such fare takes precedence over more thought-provoking pieces. Films that make promises of high-octane action are typically an excellent resource for fulfilling this appetite, as a weaker story construction can be forgiven in exchange for an entertaining exhibition. Unfortunately, this genre is also heavily populated with mediocre efforts that only accomplish the bare minimum without making the enterprise compelling. That is sadly where “Kate” ends up falling, and it disappoints despite some potential it does indeed display.

Mary Elizabeth Winstead stars as the title character, a ruthless and highly skilled assassin who works under the guidance of her mentor Varrick (Woody Harrelson). While exceptional at her job, the toll is starting to wear her down, and she vows to complete this last assignment. However, she ends up missing her target in a move that is highly uncharacteristic of her. What she discovers is that she’s been poisoned by a highly potent amount of radiation. She only has twenty-four hours to find out who is behind the plot to have her killed and take her own revenge on the culprits. Helping her along the way is young Ani (Miku Martineau), a ghost from her past that will also assist in the dark revelations Kate is soon to discover.

This film’s front and center attraction is most certainly Winstead, and the physicality she applies to this part is commendable. At the same time, she also conveys some authentic emotional moments, which are more of a testament to her abilities as a performer than how the character is written. For such a reliably good actor, there is a pleasure to see her take on a lead role in a physically demanding action film, and she again showcases an admirable turn. No one will argue this is a career highlight, but Winstead is a solid anchor that grounds things well. She is sadly the only member of this ensemble who makes an impact. Martineau has a precocious energy that feels authentic but can get tiresome very quickly. There are flashes of the Harrelson charm that comes through, but he’s mostly unremarkable. Brief appearances are seen from the likes of notable talent such as Tadanobu Asano, Jun Kunimura, and Michiel Huisman, but they are entirely wasted playing thinly defined and underwritten characters.

The writing is where the true deficiencies come to light. There’s hardly a moment in Umair Aleem’s screenplay that isn’t inert in the momentum that pushes the plot forward. The dialogue is stale, the characters shallow, and every narrative development is wholly predictable and pedestrian. The assortment of bland, forgettable villains doesn’t help matters, nor does the representation of Japanese culture that at best is purely aesthetic and at worst is a mismatch of surface-level observations that are stereotypical in nature. The filmmaking from director Cedric Nicolas-Troyan fails to elevate the storytelling, often allowing the decently choreographed fight scenes to be poorly shot, and many sequences are filled with distractingly subpar CGI. Occasionally, a flare in the direction will be admirable, and some editing tricks are effective. Still, the pacing often languishes, and not much effort is made to create a captivating tale.

From afar, the elements are present to make “Kate” an engaging film. Even without nuanced characterizations or a detailed assembly of the plot, Winstead’s committed performance and the well-choreographed fights would be enough to make this a worthwhile endeavor. Unfortunately, the failings of the screenplay are too significant to ignore. With so little investment in regards to the characters or narrative, combined with the less-than-inspired filmmaking, not much is presented that sets this apart from the landscape of countless other mediocre action films. This one doesn’t find a path to become all that intriguing to watch, even with some considerations.