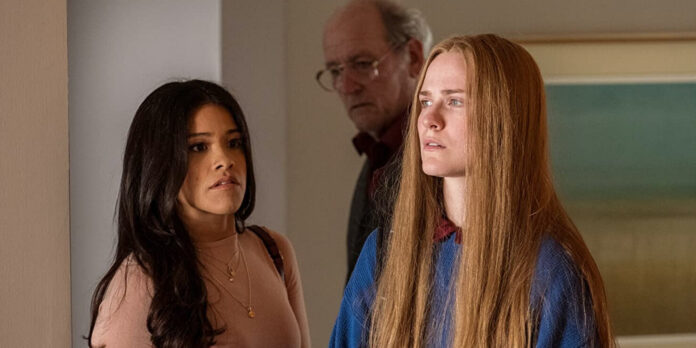 THE STORY – Two con artists have spent 26 years training their only daughter to swindle, scam and steal at every turn. During a desperate and hastily conceived heist, they charm a stranger into joining them, only to have their entire world turned upside down.

Devoted con artists Theresa (Debra Winger) and Robert (Richard Jenkins) have spent the last 26 years raising their daughter Old Dolio (Evan Rachel Wood) to live solely to be the perfect scammer and business partner to the two of them. From stealing from P.O. boxes and check forgery to sweepstakes and menial favors for profit, the motley crew will stop at nothing to earn a buck. When they’re discovered to be way behind on their rent payments (their home being the unused office space of a bubble factory with a regularly leaking wall), Old Dolio steps up in an attempt to create the perfect con to get them the money fast. Amid this scam, the parents befriend the young and talkative Melanie (Gina Rodriguez), showing her a shocking amount of love and compassion and causing Old Dolio to reflect on her own upbringing and her relationship with her parents. Miranda July’s “Kajillionaire,” wrapped up in her classic, quirky package, takes a unique approach in analyzing the anxiety of parenthood, how the way we’re raised affects us as adults, and ultimately, what being a parent means.

The film evokes a quirky tone, but not at the expense of the story or its heart. It doesn’t solely rely on its wacky characters or strange scenario to get by, but rather, it has quite a number of funny and memorable scenes and a runtime that flies by. It also possesses a great amount of heart and becomes a much deeper story than one might expect. As Old Dolio witnesses her parents treat Melanie with a kindness and attention that she was never given, she feels jealous and hurt and wonders what she missed out on having such an unconventional upbringing. When she defends their antics because, in her words, “They’re [her] parents,” Melanie simply responds, “In what sense?” This perfectly encapsulates what the film is trying to say and enforces how we should view this familial relationship: What makes someone a parent, and do they respect and love their child the way they want and deserve?

Much of the film’s heart and the message it’s trying to convey can come across in Wood’s awkwardly wonderful and surprising performance. With her long hair and deep voice, it’s unlike any role she has played, and she completely transforms into the character. She goes through a believable arc in finding herself while still staying true to the character and what we expect of her. The entire cast fits the material well, particularly Richard Jenkins who plays a messy scumbag quite affectively. Da’Vine Joy Randolph shows up very briefly but is nonetheless pitch-perfect.

Another aspect of the film that I loved was its use of music. Both the soundtrack and the score by Emile Mosseri fit the film nicely while also having a unique sound that you wouldn’t expect for a movie like this. The motif that reoccurs throughout the film using a particular song (that I won’t spoil) has a wonderful payoff that hits at exactly the right moment.

The film, however, isn’t without its faults. Obviously, some could find the quirky tone and unlikeable characters to be off-putting, and while I don’t agree, I can understand that. It’s the kind of film that, from the first couple minutes, you’re either in or you’re out. The second act of the film contains scenes that are painfully uncomfortable and perhaps go a little too far. One particular plot point that occurs between Melanie and the parents feels way too out of left field, and ultimately, didn’t work for me. The film is primarily from Old Dolio’s perspective, so having a scene without her feels off and you’re unable to understand her family’s point of view or motivation, making the scene feel less like a twist or revelation and more just out of place.

The plot also comes across as too clever at times, mainly in the third act. The overall film and certain scenarios wrap up too neatly and perfectly that it becomes a bit unbelievable. Uses of foreshadowing feel too obvious and makes the emotional payoff of those moments less effective – as opposed to if they were hinted at coming less frequently or obviously.

My biggest problem with the film is the world-building and mise-en-scène. While the weird and quirky world and home life of the main characters feel believable and grounded, the other settings of the outside world feel too generic and fake. The fancy restaurant they go to in the third act and Melanie’s apartment feel like sets – nothing about these places feels tangible and real. It comes across like a low-budget film with stock settings. Perhaps there’s a purpose behind it in that the strange and unfamiliar setting of their home and the world they typically inhabit is actually the one that feels the most normal, but it comes across as lazy.

“Kajillionaire” is certainly a film where the good outweighs the bad, with its characters and music helping to overlook any weaker aspects. It’s a well-paced film that’s an easy watch to get through (outside some cringeworthy or uncomfortable moments) that also seems like it could be effortlessly rewatchable. Despite any qualms, it’s enjoyable and feels like it has some of the most memorable scenes of the year, both for their humor and heart. It also features one of Wood’s best and most unique performances. However, I do appreciate that, for all its quirk and wackiness, the film starts a discussion on parent-child relationships with the kind of nuance that’s hard to find in films like it.