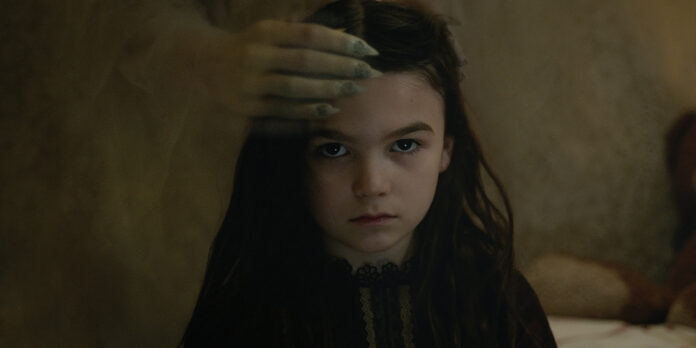 THE STORY – A young governess is hired by a man who has become responsible for his young nephew and niece after the deaths of their parents. A modern take on Henry James’ novella The Turn of the Screw.
​
THE CAST – Mackenzie Davis, Finn Wolfhard, Brooklynn Prince & Joely Richardson

​​Much has been made recently about the explosion of intriguing, thought-provoking horror films that have emerged in this new era. While the genre has always been the home of great storytelling, there seems to be a renaissance lately from gifted auteurs that seek to tell profound stories that serve as a commentary on deeply thematic subjects. However, not all of them are shiny gems, and we still have many that fall short. Some of them do so in a spectacular fashion and others have all the right elements in place that just aren’t executed in a successful way. “The Turning” falls more on the latter end, never quite coalescing into an engaging work.

The film is yet another adaptation of the Henry James novel “The Turn of the Screw,” and this version centers on an outgoing teacher, Kate (Mackenzie Davis), who takes the position of a live-in nanny in an isolated Maine estate. Her primary position is to oversee the care of precocious Flora (Brooklynn Prince), but Kate encounters tension with her older brother, Miles (Finn Wolfhard). Miles never relents from the antagonistic relationship with Kate, and her strange relationship with the children fuel the strange and supernatural hauntings that take place within the home. Her attempts to ingratiate herself into this family only reveals a further descent into the horror on display.

This is a modernized take on a story that was written well over one hundred years ago, and there are still trappings of an old-fashioned ghost story that the film never shakes. These aren’t necessarily demerits, because these are the moments where the film actually manages to craft some intriguing set pieces. Director Floria Sigismondi has a keen sense of when to dial in the creep factor and many of her techniques do a lot to cast an eerie mood that’s often effective. Unfortunately, most of the sequences don’t really have a great sense of suspense to them. Many scenes come across as rather generic and uncreative, and despite some pretty set dressing, it never feels like it indulges in a space that feels unique.

The screenplay also does the film no favors in the way it chooses to tell this story. Writers Chad and Carey W. Hayes indulge in many clichés that always feel predictable, while never finding new and inventive ways to showcase this tale. A part of that is due to the traditional nature of the material, but this adaptation also struggles to present intriguing characters, all of whom are trapped in a plot that has little momentum. The frustration is especially felt toward the film’s conclusion, which is clunky and quite unsatisfying.

Davis is an actress who always brings a lot of her own power to the material, and there’s certainly an effort on her part to make a connection with this character. Her strengths are particularly on display when she has to present the utter mental torture she goes through. However, because her character doesn’t seem fleshed out, her impact is minimal. Prince is actually a delight to watch as she captures the genuine image of a playful yet guarded child, and watching her perform lifts the material quite a bit. Wolfhard is fine, mostly one-note with very little nuance. The same goes for Barbara Marten as the insidious housekeeper and Joely Richardson as Kate’s mentally disturbed mother. The actors do their best, but they’re unfortunately saddled with characters that don’t give a lot back.

It should always be commendable when a horror film doesn’t immediately go for cheap jump scares and actually tries to create something moodier and atmospheric. However, the basic materials regarding a strong story and interesting characters are still required, and that’s where this film truly struggles. The story feels quite pedestrian and never quite manages to pull you into its developments, leaving you with dull characters that also don’t create much investment. The same goes for the direction and most of the performances, despite them being effective in too few moments. There’s still much to be gained in this new age of horror, but this isn’t an example of one that could be placed in that company.