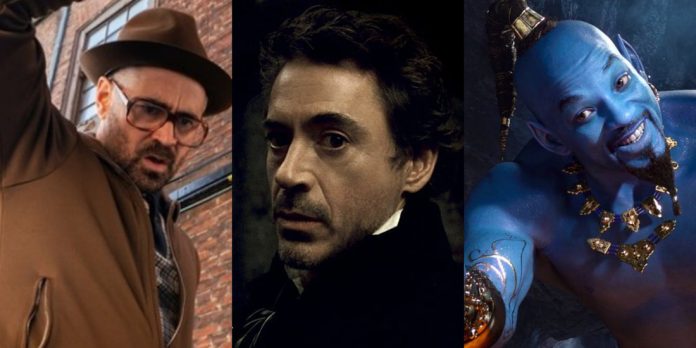 ​​Guy Ritchie isn’t a filmmaker who’s concerned with accolades or critical acclaim. He’s an entertainer, first and foremost, and his kinetic blend of sex, violence, and criminality has made him one of the most successful names to come out of the post-Tarantino generation.

Because of his penchant for style over substance, Ritchie’s career has been something of a mixed bag. His best films are fast-paced, comical and endlessly quotable, while his worst films can be loud, uncouth and needlessly complicated.

Ritchie’s latest release, “The Gentlemen,” is now in theaters, so we thought it would be the perfect time to look back on his filmography and determine which films land on which side of the scale. Our ranking will go from worst to best.

Ritchie dared to make a romantic comedy with 2002’s “Swept Away,” and the result is genuinely baffling. It’s a remake that strips away every conceivable virtue of the original and replaces them with idiotic plot points, detestable characters, and a romance so implausible it barely registers onscreen.

The lack of chemistry between Ritchie’s then-wife Madonna and Adriano Giannini makes the 89-minute runtime feel like an eternity. The real travesty, though, is the direction. Ritchie is woefully out of his depth here, unable to rely on his standard tricks and resorting to sentimentality so bland and saccharine that it borders on insulting. He somehow lowers the quality of an already dismal script.

“Swept Away” won 5 awards at the 2002 Golden Raspberries, including Worst Picture and Worst Director. Proof that sometimes films do get the recognition they deserve.

Ritchie seemed like a fine choice to helm a “King Arthur” reboot, given his action credentials and past success with the “Sherlock Holmes” franchise. But instead of a focused adventure, the director gives us a frenetic jumble that fails to entertain or take advantage of the rich mythology at his disposal.

“Legend of the Sword” is a mess in terms of tone and pacing. It dwells on random, extraneous details while skipping past major plot points, as if to ensure that we never have time to connect or learn more about a given character. It’s the rare film that feels overly-complicated and underdeveloped at the same time. It also wastes a cast (Charlie Hunnam, Jude Law, Eric Bana) that’s ideally suited to medieval drama.

Here’s hoping the next “King Arthur” reboot sticks the landing.

Ritchie returned to his crime roots with 2005’s “Revolver.” The film focuses on Jake Green (Jason Statham), a trickster who develops a universal formula that guarantees victory for any user at any game. It’s a unique premise, and Statham hams it up with an audacious hairpiece, but the film crumbles under the weight of its own grand pretensions.

Ritchie packs “Revolver” tight with philosophical ramblings, mathematical symbolism, and a laundry list of double-crosses. It’s not that the film is dense, per se, but that its dense construction fails to provide much in the way of entertainment. Whatever insight meant to accompany the chess pieces as they fall in place is nowhere to be found by the end.

“Sherlock Holmes: A Game of Shadows” is a decent blend of blockbuster action and drawing room mystery. It follows the titular hero (Robert Downey, Jr.) and his assistant Watson (Jude Law) as they travel across Europe in an effort to stop the dastardly Moriarty (Jared Harris). There’s also a subplot involving Holmes’ love interest Irene Adler (a scene-stealing Rachel McAdams).

“A Game of Shadows” lacks the freshness of the first film, but Ritchie continues to hone his talent for onscreen destruction and snappy banter. He doesn’t try to do too much, and it’s to his benefit, as the star power of the cast helps smooth over the script’s weaker moments.

Ritchie will return for a third “Sherlock Holmes” film on December 22, 2021.

“Aladdin” is one of the oddities in Ritchie’s filmography. The film isn’t great by any stretch of the imagination, but it’s not the colossal flop that Disney fans were predicting when the trailer first dropped. Ritchie’s high-energy pace actually lends itself well to the opening sequence, where Aladdin (Mena Massoud) steals a loaf of bread and gets chased through a market.

Ritchie’s direction becomes less assured as the fantasy elements take over, but he handles the CGI tech much better than he did with “King Arthur.” He also gets a charming performance from Will Smith as the Genie.

While “Aladdin” is middle-of-the-road in quality, it’s not a film I would recommend to hardcore Ritchie fans. It has none of the panache or stylistic signatures the director is known for, and feels more like a paycheck than a labor of love.

“RocknRolla” is quintessential Ritchie. It’s not his best film, but it’s the one that best exemplifies his strengths and weaknesses working in tandem. We follow a group of low-level crooks (Gerard Butler, Idris Elba, Tom Hardy) who run afoul of an aging gangster (Tom Wilkinson) and set off a hectic chain of events that involves UK real estate, the Russian mob, and a junkie musician (Toby Kebbell).

The film is missing the spark of Ritchie’s earlier releases, and there are times when it feels as though he’s trying to imitate his younger self (i.e. the interconnected plot points). But the film’s best scenes are undeniable, and the ensemble cast is one of Ritchie’s finest to date. They turn what could’ve been a tired rehash into something wickedly fun.

Ritchie’s last two films serve as a good indicator of his directorial gameplan. He’ll venture out of his comfort zone with a blockbuster like “Aladdin,” and then return to his crime wheelhouse with a drama like “The Gentlemen.” The latter is easily the better release, and given the creative slump Ritchie has languished in since 2015, it’s a welcome return to form.

“The Gentlemen” is another story of criminal dealings and schemes with a colorful array of characters; you know what you’re getting at this point. The cast is filled with stalwarts like Matthew McConaughey, Hugh Grant and Colin Farrell, each of whom looks delighted to hold a gun and act like a heavy. Does it run 20 minutes too long? Sure. But the eccentricities and the execution make it all worthwhile.

“The Man from U.N.C.L.E.” is Ritchie’s coolest effort. The film, which is based on the TV series of the same name, follows CIA agent Napoleon Solo (Henry Cavill) and KGB agent Illya Kuryakin (Armie Hammer) as they team up to take down a nuclear arms dealer during the Cold War.

The cars are fast, the settings are glamorous, and perhaps most surprisingly, the chemistry between Cavill and Hammer is on point. Ritchie isn’t known for being an actor’s director, but he makes these normally stiff actors seem like capable movie stars. “U.N.C.L.E.” suffers from the same generic plotting that affects most of Ritchie’s work, but the overwhelming style of the piece makes it easier to forgive here. It’s the closest the director has come to making a 007 film.

“U.N.C.L.E.” was a commercial disappointment at the time of its release, but it has since amassed a cult following.

“Sherlock Holmes” is Ritchie’s best-known film. It’s the commercial success he had spent a decade working towards, and it proved that his particular brand of violence and black humor could find a mainstream audience. It helps that Ritchie’s version of Holmes (Robert Downey, Jr.) differs greatly from the detective found in the original short stories.

The director reinvents the bookish Holmes as a womanizing brawler with near-supernatural abilities, which fits in perfectly with the heightened, steampunk-esque London setting. The set pieces are equal parts absurd and enthralling, and the lead performance by Downey, Jr. is so good that he remains the only actor in a Ritchie film to win a Golden Globe.

“Lock, Stock, and Two Smoking Barrels” is the genesis of Guy Ritchie. It’s his debut feature, and it neatly lays out all of the thematic and stylistic elements he would use throughout his career. It’s also one hell of a thriller. It tells the story of a card shark (Eddie Moran) who loses £500,000 to a crime lord and decides to rob a small-time gang who happens to be operating next door.

“Two Smoking Barrels” is bustling with the sort of creativity that only a rookie director possesses. The conversations are sharp and expletive-filled, and the world the characters inhabit feels unique on the big screen. It’s rough around the edges when compared to Ritchie’s later work, but the purity of it remains impactful. Plus, it introduced moviegoers to Vinnie Jones and Jason Statham.

If “Two Smoking Barrels” is Ritchie’s equivalent to “Reservoir Dogs,” than “Snatch” is his “Pulp Fiction.” It’s the moment where all of his technical choices and storytelling instincts coalesce into a perfectly unified whole. He’s firing on all cylinders here, whether it be his quick editing style or the effortlessly quotable dialogue he endows to each character. (“You should never underestimate the predictability of stupidity.”)

The film boasts two interconnected stories. One revolves around a stolen diamond and the other around a boxing promoter who’s on the leash of a powerful gangster. The ensemble cast is an embarrassment of riches, with names like Jason Statham, Brad Pitt, Vinnie Jones, Benicio del Toro, Dennis Farina, and Stephen Graham. Each of them delivers performances that are simultaneously memorable and beneficial to the larger narrative.

Ritchie has yet to equal the dizzying heights of “Snatch,” but the film proves that when he’s on his game, he’s one of the most entertaining filmmakers working in the crime genre.

What is your favorite Guy Ritchie film? Have you seen “The Gentlemen” yet? Let us know in the comments section below or on our Twitter account.