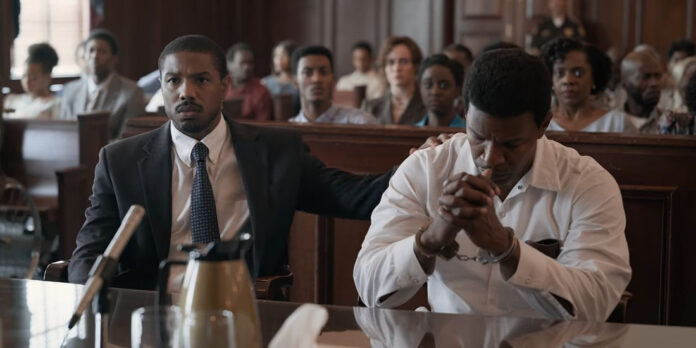 THE STORY – A powerful and thought-provoking true story, “Just Mercy” follows young lawyer Bryan Stevenson (Jordan) and his history-making battle for justice. After graduating from Harvard, Bryan might have had his pick of lucrative jobs. Instead, he heads to Alabama to defend those wrongly condemned, with the support of local advocate Eva Ansley (Larson). One of his first, and most incendiary, cases is that of Walter McMillian (Foxx), who, in 1987, was sentenced to die for the notorious murder of an 18-year-old girl, despite a preponderance of evidence proving his innocence and the fact that the only testimony against him came from a criminal with a motive to lie. In the years that follow, Bryan becomes embroiled in a labyrinth of legal and political maneuverings and overt and unabashed racism as he fights for Walter, and others like him, with the odds and the system stacked against them.
​
THE CAST – Michael B. Jordan, Jamie Foxx, Brie Larson, Rob Morgan, Tim Blake Nelson & Rafe Spall

​​​​Walter McMillian spent five years on death row for a crime he didn’t commit, including some time before he even went to trial. When a black man is accused of killing a white woman, that’s just how things go, especially in Alabama, especially in the late 80s-early 90s. Destin Daniel Cretton’s “Just Mercy” knows this and makes sure you know it, too. Remarkably unsubtle at times, the film knows the importance of the story it’s telling, especially in today’s society, and wants to make sure the audience gets the message.

Michael B. Jordan plays Bryan Stevenson, a Harvard-educated lawyer who wants to help people. He has gotten federal funding to move to Alabama and help death row inmates, mostly but not exclusively African American, with their cases. These are poor people who often can’t afford good legal assistance, and even when they can, have to deal with the prejudices of even the most good-hearted public defenders in the area as they try to navigate a legal system that is working against them at every turn. When he meets McMillian (Jamie Foxx), known as Johnny D, the death row inmate is dismissive. What does this well-educated man from the North know about his circumstances, and how will he be different from all the other lawyers who have “helped” with his case over the years? But Stevenson is intrepid, and when he sees how grossly justice was not done in McMillian’s trial, he makes it his mission to overturn the conviction.

This is the stuff of many a legal drama over the years, and “Just Mercy” adds nothing new to the formula, other than a topicality that couldn’t be more of-the-moment. We are at a point in American history where we are actively looking at systemic injustices in our society, and that of the poor and ethnic minorities in the judicial system is a big one. The film overplays it’s hand early and often: The opening scene features McMillian cutting down a giant tree, and when Stevenson goes to visit the prison, he sees a bunch of prisoners, all African American, in white working the fields. The dialogue in Cretton and Andrew Lanham’s screenplay is similarly outsized, with scenes often ending one or two lines after their point has been made, in an effort to ensure the audience gets it.

This doesn’t matter much, though, when you have a group of talented performers delivering the dialogue, and “Just Mercy” absolutely has that. Michael B. Jordan plays Bryan Stevenson at just the right pitch, always underplaying the exact right amount. He never pushes too hard, even in big scenes, which keeps the film grounded. Jamie Foxx is even better as McMillian, turning in a performance that is sure to catch Oscar’s eye. It’s a baity part, with major emotional highs and lows to hit throughout the film, and Foxx hits all of them gracefully, never overplaying a single one. He’s very affecting, but even more affecting is Rob Morgan, as a fellow death row inmate. Morgan is always a stand-out, but here he gets handed the best scene of the whole film and turns in possibly his best performance yet. Even Tim Blake Nelson, who at first appears to be overdoing the actorly tics as the white man who gave false testimony that helped convict McMillian, ends up nailing the character’s arc in an emotionally impactful way.

And that’s the key to “Just Mercy”: For all that it is unsubtle and overdone, it has an undeniable impact in its final scenes. True to form, it probably ends one scene too late, going for an extra moment of impact when it has already hit its most emotionally satisfying beat. But this is still an important story to tell, and if the film doesn’t do anything interesting or exciting with the material, it is still solid and ends on a high note. It works, and there’s nothing more it needs to do than that.