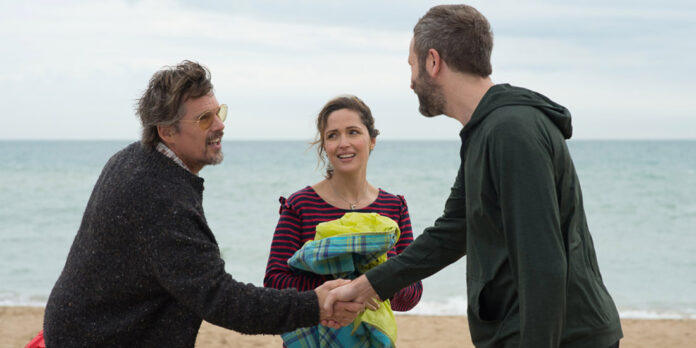 THE STORYAnnie is stuck in a long-term relationship with Duncan—an obsessive fan of obscure rocker Tucker Crowe. Duncan is far more devoted to his music idol than to Annie. When the acoustic demo of Tucker’s hit record from 25 years ago surfaces, it leads to a life-changing encounter between Annie and the elusive rocker himself.​

​​​​Annie (Rose Byrne) and Duncan (Chris O’Dowd) are in a long-term relationship living in a seaside town. Duncan is painfully obsessed with rock star Tucker Crowe (Ethan Hawke) and his whereabouts. After recording, an album entitled Juliet, Tucker disappears from the mainstream, only sought after by a small internet fan club, led by Duncan. The obsession with Tucker Crowe clearly leads to frustration between Annie and Duncan as they both seek for meaning in their middle-aged existence. When an unmarked envelope arrives with a copy of the demo version of Juliet (Thus the title, “Juliet Naked”) it causes tension between the couple. In what is meant to be a small form of revenge on Duncan, Annie creates a fake internet account discrediting the value of this newly found recording and she unexpectedly finds her way to Tucker Crowe himself. They begin a friendship via email, opening up about life, relationships, and parenthood.

Tucker Crowe, in typical rock star fashion, one could say, has several children from different spouses and currently lives in his ex-wife’s garage so that he can care for their shared son, Jackson (Azhy Robertson), the youngest of several children he has fathered. It is not clear until the ending of the film why he stepped away from a musical career, but we do know that he is facing the reality of his past choices and what they mean to him now in mid-life.

As Duncan and Annie’s relationship unravels, she forms a connection with Tucker.  This leads to a very funny and effective reunion of fan meets idol, as Duncan is finally matched face to face with his biggest hero. This was the best part of the film and was very funny. Chris O’Dowd is perfect in portraying a small unraveling around the realization that some idols are best left alone. Newcomer, Lily Brazier, is also a very nice surprise in the film.  She plays Annie’s lesbian sister and provides some of the best comedic moments in the film. She will be a name to watch out for. Hopefully, we will see more from her in the future.

The film is adapted from a novel by Nick Hornby, best known for screenplay writing credits for highly respected films such as “Brooklyn,” “An Education” and “Wild.” The screenplay adaptation was done by Tamara Jenkins, Director of “The Savages” and another 2018 Sundance film, “Private Life” along with others.  It is in the adaptation, that I feel there is some missed opportunity to give more depth to the characters. Instead, most of the film is played for laughs, particularly in the introduction of our introduction main characters. Major life impacting situations are played more for laughs rather than pathos. These themes include infidelity, midlife breakups and the main character’s struggle with the decision to free one child. Although there certainly are some hilarious moments and I enjoyed myself, when the film attempts to change gears to pathos, later on, it feels unearned and inconsistent. The movie would have been best to stick to one lane in this case and better utilize the talent of the three headliners to their full potential. In particular, Rose Byrne, is highly underutilized in her role and although she is the main character, she is never fully developed. There are unfinished storylines related to family-centered around nonconventional families that are introduced but never resolved.

In summary, this is an enjoyable film with effective use of humor and some great comedic moments. It is fully worth a watch and I would consider a successful independent romantic comedy. Where the film falls short is the attempt to introduce more serious themes, but leaves them as loose ends.