“SORRY TO BOTHER YOU” 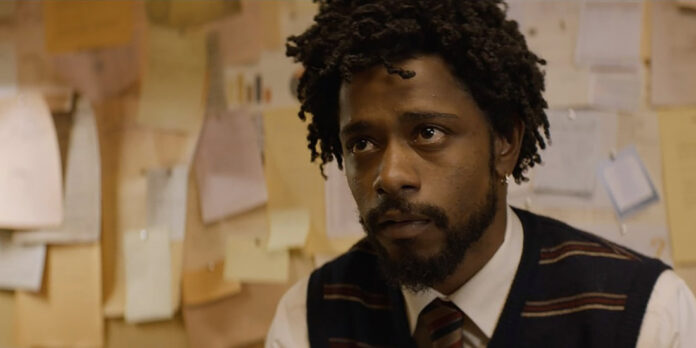 THE STORY – Cassius Green (Lakeith Stanfield), a 30-something black telemarketer with self-esteem issues, discovers a magical selling power living inside of him. Suddenly he’s rising up the ranks to the elite team of his company, which sells heinous products and services. The upswing in Cassius’s career raises serious red flags with his brilliant girlfriend, Detroit (Tessa Thompson), a sign-twirling gallery artist who is secretly a part of a Banksy-style collective called Left Eye. But the unimaginable hits the fan when Cassius meets the company’s cocaine-snorting, orgy-hosting, obnoxious, and relentlessly optimistic CEO, Steve Lift (Armie Hammer).​

​​​​​​Teetering somewhere between brilliance and the edge of madness is the rapper now turned film writer/director Boots Riley’s directorial debut “Sorry To Bother You.” Bursting out of the gate with ideas that tackle our capitalist society, “Sorry To Bother You” is funny, smart and insane to the point where it becomes too ambitious for its own good and the inexperience of Boots Riley as a director/writer starts to shine through. Featuring hysterical performances Lakeith Stanfield, Tessa Thompson and Armie Hammer, “Sorry To Bother You” is a unique satire that shows promise for the new writer/director even if the film does not always stick its landing.

Cassius Green (Lakeith Stanfield), is a 30-something black telemarketer who is living in his uncle’s garage with his girlfriend Detroit (Tessa Thompson, rocking some very oversized earrings with witty phrases on them). He realizes he has this ability to utilize something called “the white voice” at his job, thus allowing him to close more deals and ascend up the company ladder despite his colleagues not receiving any benefits and not feeling particularly fond of the services and product they are selling. Thinking of himself instead of his girlfriend and colleagues, Cassius becomes a “power caller” and is invited to make the acquaintance of the CEO of the company, Steve Lift (Armie Hammer), a cocaine-snorting, orgy-hosting, obnoxious, and relentlessly optimistic man with big ideas for Cassius and the future of his company.

The phrase “Stick To The Script” (or STTS) is said multiple times throughout “Sorry To Bother You” (Another common phrase said during sales phone calls when interrupting a potential client’s day) and it’s a phrase that I wish was more adhered to by many who worked on this film. The first two acts of Boots Riley’s satirical comedy completely work in the way it depicts Cassius Green (Or “Cash Is Green”) and his rise up the sales ladder in the company he works for along with Steven Yeun and Danny Glover, among others. There is a unique rhythm to the comedy and original ideas are thrown in left and right to make the story interestingly dynamic such as a visual gag when Cassius calls a client, we see his desk fall right into the same setting as the potential client he’s reaching out to, forcing them to have a face-to-face conversation. The most brilliant idea though is the concept of “the white voice.” It’s a sales technique that some try and very few master within the world that Boots Riley has created. In order to close more sales, a black man must put on their best “white voice” to engage with the customer. Often hilarious, the joke is utilized throughout “Sorry To Bother You” and it never gets old despite a few instances where it appears the lip syncing with the voice over of the white voice does not match. This technique leads Cassius to become a “power caller” resulting in him getting a promotion and meeting the CEO of his company, a coke-snorting (From probably the biggest line of coke in cinema history) and absolutely manically insane Armie Hammer. It is here, where “Sorry To Bother You” takes a wild turn and this rags-to-riches story with a character we can root for becomes something too big for its own good, attempting to use genetically mutated horse-humans, stop-motion animation and a television satire called “I Just Got The Shit Kicked Out Of Me” to convey its themes and points.

The wit and originality of “Sorry To Bother You” is on full display. in its visual choices, editing, music, and performances. It is bizarre and wholly original in its depiction of a black man who comes from nowhere, assimilating himself more into a white culture, losing a part of who he is for personal and financial success. Lakeith Stanfield gives a likable, relatable and hysterical performance that helps to carry the audience through the film’s rough patches. I truly wanted to love “Sorry To Bother You” as I feel it has a lot to say with many great ideas but it does not know how to say them. It’s though as if Boots Riley just through every random idea in his head onto the page and hoped that it would all eventually stick. The truth? It does not. Sorry to say.