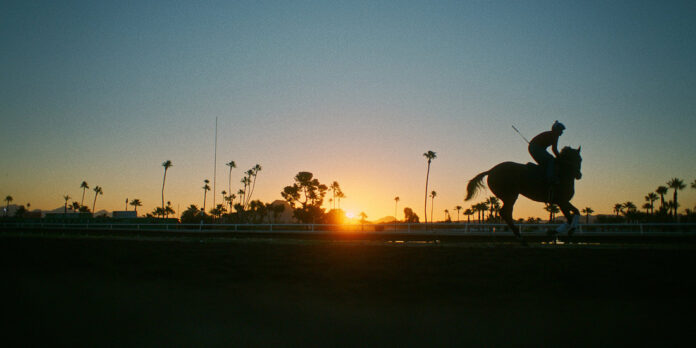 THE STORY – Seasoned horse jockey Jackson (Clifton Collins Jr.) has weathered decades of races on the riding circuit, but he now finds himself facing what could be his last season as his health deteriorates. With the help of Ruth (Molly Parker) and a promising new horse, Jackson starts to prepare for the upcoming championship. His plans take a left turn when a budding young jockey (Moisés Arias) shows up and claims to be his son. Caught between yearning for a connection and uncertainty about his own future, Jackson confronts difficult questions regarding his legacy.
​
THE CAST – Clifton Collins Jr., Molly Parker & Moises Arias

Last year, many audience members heard Quentin Tarantino tell the story of Easy Breezy in “Once Upon A Time In Hollywood.” In it, his character Rick Dalton describes a bronco buster who was at the top of his game and then one day, he suffers a nasty fall off a horse and due to his age, he’s slowly starting to realize that he can’t ride anymore. While “Jockey” is certainly not based on this story (it’s instead heavily influenced by feature debut director and screenwriter Clint Bentley’s life growing up), it’s a familiar premise that we’ve heard and seen before in other stories (think “The Rider” but with a jockey instead). However, as Bong Joon-ho said at the Oscars last year, “the most personal is the most creative,” and it does not get any more personal for Bentley than it does here, as his late father was also a jockey. The film not only serves as a loving tribute to his father and the lifestyle he led but it also finally gives long-time character actor Clifton Collins Jr. a substantial leading role for him to showcase his incredible acting talents.

Jackson Silva (Clifton Collins Jr.) has made a small living as a horse jockey for most of his life. In that time, he has had many injuries. And now, at the age of fifty, he finally has to start contemplating not just the end of his career but the end of what has been a way of life for him for so long. When a young boy named Gabriel (Moisés Arias) shows up unexpectedly and reveals that he is Jackson’s son, Jackson wants nothing to do with the boy. However, over time, as Jackson starts to get in shape as best as he can for what may be his final race, he starts to get close to the boy and begins to contemplate what his future will be and what kind of a legacy he wants to leave behind.

Shot gorgeously by cinematographer Adolpho Veloso at mostly magic-hour, with warm hues that imbues the film with bright colors and harsh shadows, “Jockey” is a film that finds one man confronting his own mortality as he not only begins his transition into old age but also has to consider a world where he’s no longer able to race horses anymore. For men like Jackson, being unable to ride is a fate worse than death. But as his friend friend Leo, who is sitting in a hospital bed after suffering a bad fall off of a horse, tells him, “You can’t be afraid of death any more than a baby can be afraid of being born.” Much like the cinematography and Jackson’s ups and downs, the simultaneously melancholy yet beautiful score by Bryce & Aaron Dessner perfectly accentuates the themes that Bentley is exploring as he considers the totality of one man’s life.

Jackson is stubborn, frustrated and cannot accept that this is the end of the line for him. Even with all of the warning flags going up from his doctor (Jackson has broken his back three times in his life, or at least that’s how many times he can remember), his friend Ruth (Molly Parker) and his son, Jackson is still determined to press on for one more race, no matter what the consequences are. Clifton Collins Jr. delivers a quietly powerful performance as Jackson that will hopefully not go under the radar when we get to next year’s awards season. His work conveys Jackson’s inner strength despite his physical strength failing him. He is also able to bring a tremendous amount of nuance to the role, especially in the scenes involving him and the people closest to him in his life.

The primary reason why Collins Jr. can achieve this is because Bentley’s screenplay chooses to focus less on the horse races we typically see glamorized in movies and more on the lives of people who live that lifestyle. There is a scene where Gabriel is involved in a race and instead of shooting the race in-person and up close, we only see it from Jackson’s perspective on television. Such a choice to hold back from shooting any of the horse races we often hear the characters talking about allows for there to be a build-up to the consequential one for Jackson that will either allow him to close out this chapter of his life on top or leave him broken and defeated, physically and spiritually. When the gunshot goes off and the horses start running, Bentley’s directorial instincts are grounded in character and stunning to behold, as the sound drops out and the camera holds on Jackson’s face as he races towards the finish line. How will it end for him? I will not tell you but how Bentley chooses to close out Jackson’s story is not only poetic but it feels so right, making this captivating character study ultimately worth it by the time the credits roll.