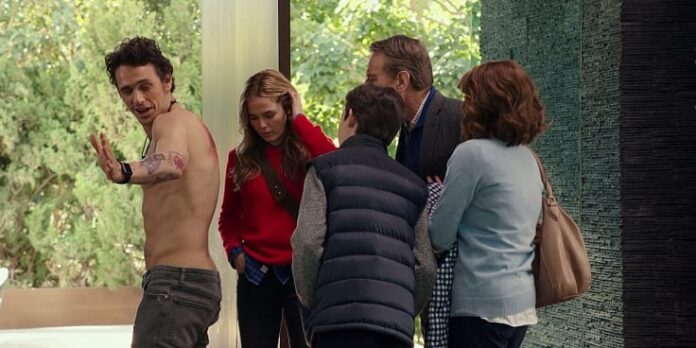 THE STORY – During the holidays, loving but overprotective Ned (Bryan Cranston) travels to California to visit his daughter Stephanie (Zoey Deutch) at Stanford University. While there, he meets his biggest nightmare: her well-meaning but socially awkward boyfriend Laird (James Franco). Even though Laird is a billionaire, Ned disapproves of his freewheeling attitude and unfiltered language. His panic level escalates even further when he learns that Laird plans to ask for Stephanie’s hand in marriage.
​
THE CAST – Bryan Cranston, James Franco, Zoey Deutch, Keegan-Michael Key, Megan Mullally, Griffin Gluck,

“Why Him?” is a comedy that plays everything completely safe and doesn’t try to do anything more than get us to utterly hate James Franco’s character who might just be the most easily obnoxious and annoying character I have seen in a film all year. The film is saved by the presence of the always wonderful Bryan Cranston who brings his comedic chops to the big screen (Previously showcased to great effect in “Malcolm In The Middle”) and a few good good laughs here and there. But when all is said and done, “Why Him?” is an inconsequential film that is neither memorable nor very good.

Ned Fleming (Bryan Cranston) is an old-school guy (He barely uses up to date technology for his own printing business) who has a loving family with his wife Barb (Megan Mullally) that includes their two children Scotty (Griffin Gluck) and Stephanie (Zoey Deutch). Stephanie is a 22-year-old college student who has been dating in secret a financially wealthy app developer named Laird (James Franco) who has no filter for both his words and actions despite his good intentions. When Stephanie decides she would like for her family to spend the holidays with her and Laird so they can get to know her boyfriend better, the situation becomes tense when Laird reveals to Ned that he intends to marry Stephanie.

Let me first start off by saying, I was a big fan of director John Hamburg’s previous directorial effort “I Love You, Man.” Where that film found great moments of honesty and truth in how the two lead characters were able to “bro out,” here the relationship between Cranston and Franco never finds that same level of authenticity. The third act of the film feels so forced, mostly because as a story, what we expect to happen ultimately happens but it neither feels earned nor does it make any real sense. The film does a good job of setting up why Ned is unaccepting of Laird, but does not do enough to convince us as to why he finally warms up to him.

The other issue with “Why Him?” is the character of laird himself. He’s a good-hearted person who wants to do the right thing, but with no filter and some really dim-witted common sense issues becomes an annoyance to not just Cranston, but to the audience itself. This is more of a fault towards the screenplay than James Franco himself who is quite good at selling this character’s good qualities and bad. However, the screenplay does not manage to flesh him out and make him entirely believable as a human being and so when he does have these more serious moments with either Ned or Stephanie, we simply don’t believe it.

Supporting performances from Megan Mullally as Ned’s wife Barb and Keegan-Michael Key as Laird’s right-hand man Gustav are more entertaining at times the either Cranston or Franco, providing wonderful comedic turns that save the movie from being a complete failure. But once again, it all comes down to the screenplay which is so focused on vulgarity and weak jokes to make all of the awkward moments funny. Instead, the humor comes off as immature and elementary.

So while “Why Him?” has a few good laughs, is anchored by the always terrific Bryan Cranston and features some amusing supporting turns, it’s held down by a weak screenplay that like Laird, tries too hard. The character of Laird himself is maybe one of the most bothersome characters in a film this year even though Franco tries to bring some humanity to him. All in all, this is one Christmas movie that will not be worth resisting as the years go on