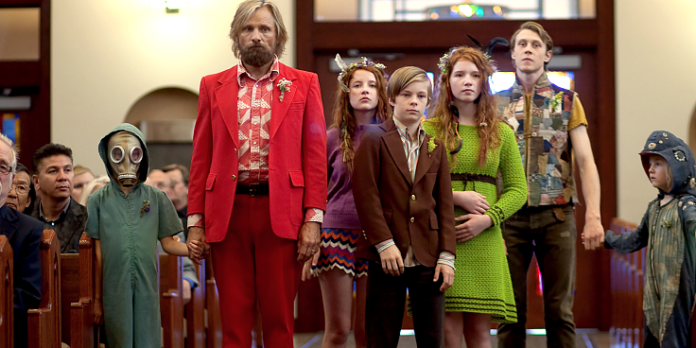 THE STORY – Ben Cash (Viggo Mortensen), his wife Leslie and their six children live deep in the wilderness of Washington state. Isolated from society, Ben and Leslie devote their existence to raising their kids — educating them to think critically, training them to be physically fit and athletic, guiding them in the wild without technology and demonstrating the beauty of co-existing with nature. When Leslie dies suddenly, Ben must take his sheltered offspring into the outside world for the first time.

​Matt Ross’s big hit at Sundance this year is a thought provoking and enjoyable cinematic experience featuring a soulful turn from Viggo Mortensen which ranks as one of the actor’s best. It’s a heartwarming film which will simultaneously make you laugh and cry through its very human story of a parent doing everything he can to raise his children the best way he sees fit. There are a few narrative missteps along the way which holds the film back in some areas but ultimately Viggo Mortensen puts the film on his shoulders and carries it the whole way through.
​
​Ben Cash (Viggo Mortensen) and his wife Leslie live with their six children in the wilderness, miles away from civilization. Completely isolated and utterly sick of how children within today’s society are being raised, Ben and Leslie set out to raise their kids in their own manner by training them mentally and physically to survive in the world. They live without technology, stay physically fit and are home schooled on various topics within history. Some time later, Leslie dies and Ben is told by his father-in-law Jack (Frank Langella) to stay away from the funeral. Determined and with the help and support of his kids, Ben decides to take the trip back into society to not only attend the funeral but to bury the mother of his children in the manner which is in accordance with her last will and testament.

The film does a superb job of setting up exactly how this family lives in the wild. All seven individuals are living in peace together, hunting for food, taking care of the food and water and training to defend themselves. But they’re not savages despite the primal nature of their living situation. They play music together, learn from books and speak different languages. All of this is done under the watchful guise of Viggo Mortensen’s patriarchal figure who has his own faults (Or so some would say) in how he chooses to raise his kids. He curses freely in front of them and doesn’t reprimand them when they use foul language either. He also encourages them to steal and they celebrate fictitious holidays named after humanitarians rather than Christmas.

It’s funny that the title of the film is called “Captain Fantastic” in that it takes two superhero names (Captain America and Fantastic Four) and puts them together to represent Viggo Mortensen’s character as some sort of superhero. If he is not to you as an audience member, he certainly is to these kids. And there is no denying the heroic effort Viggo Mortensen puts into this character by displaying all of his best and worst qualities as a father. Viggo, who is said to be a woodsman himself, reminds us again of what a soulful, vibrant and wonderful actor he is. All of the kids are fantastic (There’s that word again) as well, especially George MacKay as the eldest son Bodevan. Frank Langella and Ann Dowd do what they can with the roles they have but they are mostly underwritten and then forgotten about completely in the film’s final act.

And therein lies the problem. While Matt Ross’s screenplay has a lot of talking points on the nature behind how we raise our kids, he shows his inexperience as a director in how certain scenes play out for dramatic effect as well as narrative stumbling blocks that seem to be forgiven in return for the happy ending we receive. But I’m harsh and am sticking to my guns that his work, although good, is not without its problems.

“Captain Fantastic” is a decent indie drama with quite a few laughs, heart-wrenching moments and ideas behind parenting in today’s world that will resonate differently with audience members. Viggo Mortensen is a great actor who when given the right role, can continually frustrate us with the reality that he doesn’t always get the platform to showcase his talents. He’s the reason to see this film and yes, he is fantastic.