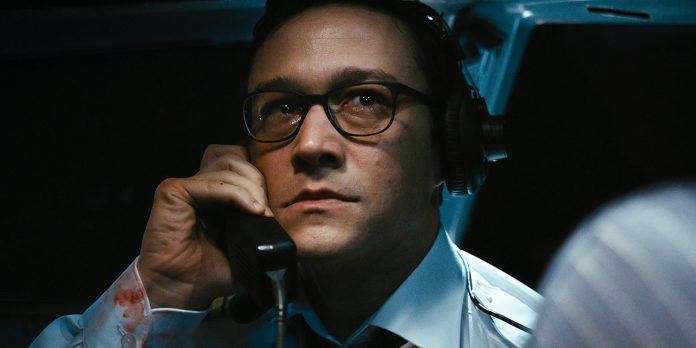 If you were to ask any cinematographer what the most challenging space to film in, they will probably answer, one that is tightly confined and restricts movement. You won’t find a more restrictive space to film than an actual airplane cockpit. Cinematography is a fundamental aspect of filmmaking, it is how we see the world in which the story takes place in. How does a cinematographer successfully manage to capture a story and a world where the action is confined to a few feet, and not sacrifice on the beautiful art form that is cinematography?

​“7500” is a film where the entire narrative unfolds in the confined space of a cockpit. This challenge might have scared off some less than capable cinematographers, but Sebastian Thaler wasn’t afraid. He’s a young and highly ambitious cinematographer who is more than willing to take on difficult tasks like shooting in an actual cockpit.

In fact, it was only in 2017, that Thaler completed his Master studies in Cinematography at the Film Academy Vienna, University of Music and Performing Arts under the guidance of Walter Kindler. Since then, he’s been freelancing as a cinematographer, working on numerous projects such as two fiction films “Ugly” (2017), and “Falling” (2017) and the documentary “Be Natural: The Untold Story of Alice Guy-Blaché” (2019). In our interview, we discuss how he became involved in “7500”, the challenges of filming in an actual cockpit, and his advice for aspiring cinematographers. ​

Can you tell me how you became involved in the filming of “7500”?

Sebastian: I actually studied with the film’s director, Patrick Vollrath. We made our graduation short together and in the past, we’ve experimented with different styles of filming and camera work including shooting in 360 degrees as well as shooting in tight restricted spaces. We weren’t aware at that time that we were preparing ourselves for the shooting of “7500”. Then one day, Patrick called me with the concept of the film and said, “Let’s do it, let’s make a film set in a restricted space.” So, that’s what we did!

“7500” is quite unique because it does all take place within one confined location which is the plane’s cockpit. What were the challenges of shooting in such a restricted space and how did you prepare yourself for this role?

A lot of preparation went into filming “7500”. We actually used flight simulators in order to get a sense of what it was like to be in the environment of a cockpit and get a sense of where everything was. Perhaps one of the most rewarding experiences was the opportunity to fly and observe inside a real cockpit at night time which allowed us to observe the way the sky and the light looked outside of the plane so we could replicate this within the actual film. For the actual shooting of the film, we used a cockpit that we restored from a junkyard and raised the roof so we could actually stand up properly inside it. For me, my main responsibility was to ensure I was invisible for the actors so they had the freedom, confidence, and space to act. Filming inside an actual cockpit seemed very method not just for them but for me. We actually shot the first 20 minutes of the film in chronological order which also helped put the actors into the mindset that they were preparing for take-off and were ascending. All the footage you see outside the plane, the airport runway, was taken at Vienna airport and projected onto a screen in front of the cockpit then filmed so the actors really got the sense that they were preparing to fly.

Were there any films about flying or set in a restricted space that you used as an influence?

“United 93” was certainly one that Patrick and I referred to, especially in terms of how the film’s narrative unfolds within the environment of an airplane. Patrick was actually in contact with Paul Greengrass about recreating the authentic atmosphere of an aircraft for a film. It wasn’t just “United 93” that we watched, we did our research and watched a lot of other airplane-related films just to get a sense of the right atmosphere.

Is there a particular shot or sequence in “7500” that you consider your favorite?

It’s hard to say which one is my favorite because we shot in such long continuous takes. It just felt so great to view the rushes before the film was edited because I could see the flow of the narrative unfolding naturally. However, the editor did such a good job of editing the film because it tightened it up and pushed the story forward at the right pace.

Is there a cinematographer whose work you particularly admire?

Definitely Roger Deakins. His cinematography is very inspiring, especially in the way he manages to capture such emotions through the lens of the camera.

Do you have any advice to aspiring cinematographers?

I would say: don’t concentrate on the technical stuff. Film sets are becoming far too technical and it becomes overwhelming. Instead of being too overly-technical with your camera work, focus on using just a hand-held camera to tell the story. Use the right tools at your disposal to push the story forward. It’s important to remember that film is a visual language.

“7500” is currently streaming on Amazon Prime. Check out the trailer below.