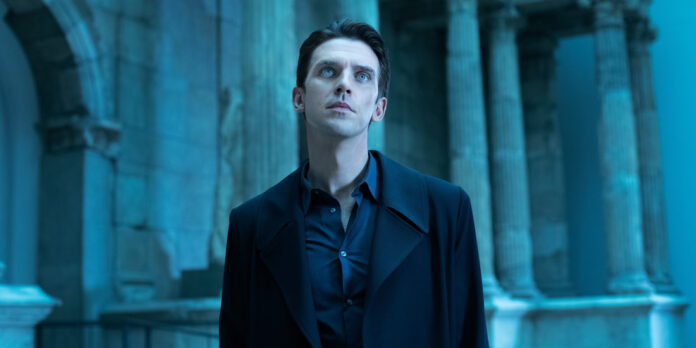 THE STORY – Alma is a scientist at the famous Pergamon Museum in Berlin. In order to obtain research funds for her studies, she accepts an offer to participate in an extraordinary experiment. For three weeks, she is to live with a humanoid robot whose artificial intelligence has been designed to allow it to morph into that of her ideal life partner. Enter Tom, a machine in (handsome) human form, created to make her happy. What ensues is a tragicomic tale that explores notions of love, longing and what makes us human.

​Everybody’s lonely these days—even people in relationships. Spending a whole year with no escape from one’s situation will do that to you. And with the usual places to socialize in person all closed down for the better part of a year, we singletons have been forced online, where every new app proclaims to have the algorithm that will find your perfect match. So the premise of “I’m Your Man” doesn’t seem quite as far out there as it once might have: Alma (Maren Eggert), a scientist studying ancient hieroglyphs, has agreed to spend three weeks with a humanoid named Tom (Dan Stevens), who has been designed to be her perfect life partner. The only problem is that she doesn’t want a partner at all, much less one that is a machine designed to be “perfect” for her.

Playing like the more good-hearted cousin of Yorgos Lanthimos’s “The Lobster,” Maria Schrader’s film (which she adapted with Jan Schomburg from a story by Emma Braslavsky) is a neat little piece of rom-com satire with a sci-fi twist. Alma’s main objections to Tom start practical (he speaks like a know-it-all and has a rather retrograde idea of romance) but become more philosophical as she spends more time with him. Of course, spending more time with him means growing closer to him, and it doesn’t take long before Alma finds herself falling for Tom, or at the very least begins having an affection for him that goes beyond a fascination with how he works. For his part, Tom may come off as a bit mechanical, but he spends a lot of time staring at art as if he genuinely appreciates it, and his behavior does change the more time he spends with Alma as he learns what she wants and what she doesn’t.

This is where Schrader makes the film really interesting – tackling the age-old science fiction problem of robots designed to “be” human. As Tom and Alma go through the standard romantic comedy beats, the artificiality of the form runs straight into Alma’s growing unease with the situation. She falls for Tom while simultaneously realizing that he is a lie and becomes frightened by what that means. After all, if he’s not real, then she’s just playacting the whole scenario. But even though she knows he’s an algorithm given very good-looking flesh and bone, she can still touch him and carry on a conversation with him, and he doesn’t always do what she expects him to. But on the other hand, can he ever truly understand what it means to be human and all the complexities and contradictions that entails?

Eggert is a genius of comic underplaying here, finding so many different ways of being flustered and taken aback by Tom and his actions. However, the real star is Stevens, fully embracing his too-good-to-be-true looks and personality and finding a surprising amount of nuance in the part. So much of what Tom does is tilting his head to one side and attempting to understand Alma, yet Stevens makes every time feel different as if Tom is constantly surprised by her in different ways. As with the greatest romantic comedy pairings, the two have great chemistry, creating sparks even (and perhaps especially) when Alma and Tom are at odds.

The tonal register that “I’m Your Man” is working in is a tricky one – sardonic but sweet, philosophical but playful. Schrader manages it perfectly, with some great comic editing from Hansjörg Weißbrich and a well-used score by Tobias Wagner. She directs Eggert, Stevens, and Sandra Hüller (wonderfully cast as a representative of the company that made Tom) to perfection, ensuring that the film is always balanced on the knife’s edge between the different tones she’s playing with. This is why the end of the film comes as a slight disappointment, with Eggert reading her final evaluation of Tom in voiceover over a montage. While it’s very well-written, encapsulating the film’s complex themes in a neat little package, it’s almost too neat, causing the film to lose a bit of its specialness right when it’s wrapping up. But then again, don’t all the best, most life-changing love affairs start wary then slowly bloom into mutual appreciation before blossoming into love only to fizzle out instead of exploding? In a way, it’s maybe the most perfect ending the film could have.