“I WANT YOU BACK” 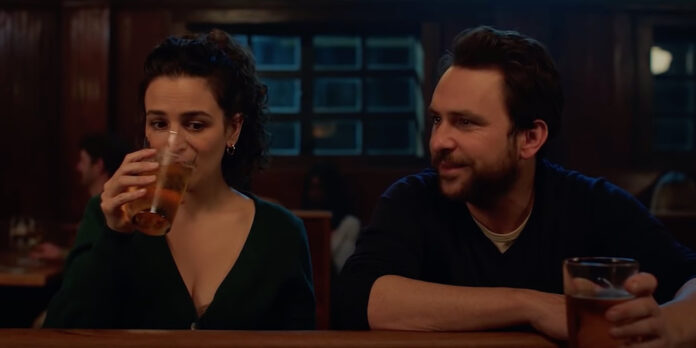 THE STORY – Peter and Emma are total strangers. When they meet, they realize they were both dumped on the same weekend. Their commiseration turns into a mission when they see that each of their ex-partners have happily moved on to new romances.
​
THE CAST – Charlie Day, Jenny Slate, Gina Rodriguez, Scott Eastwood, Manny Jacinto & Mason Gooding​

​As you get older, breakups seem to become more challenging – not because they hurt more, but because there’s the added pain of knowing you have to rejoin the exhausting dating scene and you’ve been pushed one step further from the dream of a family and kids (if that’s what you want, of course). The wise acknowledgment that sometimes part of the pain of a breakup is just the reluctance to try to find someone new is one of the things that sets “I Want You Back” apart from lesser romantic comedies.

Director Jason Orley has created a humorous and heartwarming film about heartbreak and the lengths to which two people will go to win back their exes. The film opens with two breakups: Anne (Gina Rodriguez) tells Peter (Charlie Day) that their monotonous life isn’t what she envisioned for herself while Noah (Scott Eastwood) tells Emma (Jenny Slate) that she’s too complacent and that he’s fallen in love with a beautiful owner of a pie shop. Peter and Emma are both inconsolable until they meet in the stairwell of the building that they both work in – her as a receptionist for an orthodontist’s office and him as a VP at a retirement home that may be swindling its residents – as they’ve both stepped out of the office to cry. They bond over having been dumped and end up at drunk karaoke together, where they agree to become “sadness sisters” and keep each other from calling their exes.

Watching Peter and Emma become friends is charming as they go to the movies, meet for lunch, and stalk their exes on social media. The inclusion of social media firmly grounds the characters in this decade and makes them feel more realistic, without it ever feeling hokey or overdone. Emma is the kind of quirky rom-com character that could feel cliché, but Slate brings an authenticity to her that makes her seem more realistic. Meanwhile, Day’s Peter feels very much like Nick Miller from the TV show “New Girl,” which is perhaps the highest compliment I could give a fictional male character and a smart move considering the character’s resurgence in popularity over the past couple of years. The movie explores how Emma and Peter feel adrift in their careers and have stopped trying to find something better than their jobs, which were meant to be temporary, making them feel like complete characters and not just rom-com stereotypes. It’s sure to affect many people in their late twenties and thirties who are experiencing the same thing.

Peter and Emma are dismayed to see their exes moving on with other people: Anne with the drama teacher at the middle school she works at, Logan (Manny Jacinto), and Noah with the pie shop owner Ginny (Clark Backo). They develop a questionably moral plan to help each other win back their ex: Emma will seduce Logan to break up him and Anne while Peter will befriend Noah and convince him that his ex was “the one.” It’s clear that their plans won’t work, but it’s just as apparent that Emma and Peter are much more compatible than either of them was with their exes. The resulting hi-jinks are very humorous as Peter struggles to train with Noah as a personal fitness client, and the pair goes on a wild night together at a club. Meanwhile, Emma volunteers at Logan’s middle school production of “Little Shop of Horrors,” culminating in her standing in for Audrey during a rehearsal and giving a highly memorable rendition of “Suddenly Seymour” alongside the hilariously dramatic young Manny Magnus.

In true fashion for the genre, it’s only a matter of time before their plans come crashing down, but it’s so much fun along the way that it doesn’t matter that the end outcome is already guaranteed. Isaac Aptaker and Elizabeth Berger also wrote the screenplay for “Love, Simon,” and they once again subvert many of the typical clichés. The film is set in Atlanta, not the usual New York or LA, and the characters don’t have glossy jobs or glamorous wardrobes. Another strong aspect of the film is its score by Siddhartha Khosla. The piano-heavy score does an excellent job of signaling the characters’ emotions and setting the mood throughout the film. Though the film was shot during the pandemic, you would never guess it from how well-made it is overall.

After some slow pacing in the middle, “I Want You Back” culminates in a touching ending that ties in an earlier concept in a sweet way. It’s a lot of fun to watch Peter and Emma go to extreme lengths to win back their relationships as their friendship blossoms into deeper feelings. This is one terrific rom-com that is also aided by some diversity in its casting. Each of the actors, but notably Rodriguez and Jacinto, excel in their roles. With all of these distinct elements coming together, “I Want You Back” is a delightfully funny modern rom-com for Millennials who are still trying to figure it all out.