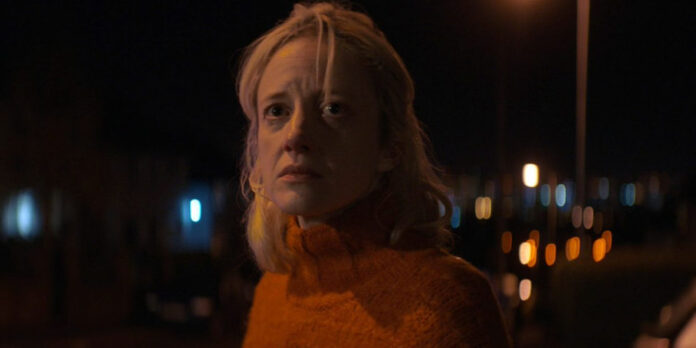 THE STORY – Haunted by the death of her young daughter, a distraught woman develops an all-consuming obsession with a girl she believes is her reincarnated child.

​In the right hands, a good thriller can do more than merely entertain an audience on the most surface of levels. It can revel in the psychological depths of its characters to examine a more personal deconstruction, one that comments not only on their own emotional state but a broader perception of the world as well. There can be an indulgence in the elements that appeal to a more broadly amusing exercise, but the potential for a more profound experience can be discovered within this genre. That is an objective at the heart of “Here Before,” a taught and well-assembled piece that at times is inconsistently engaging but is carried by a fascinating central performance.

The story revolves around a small family and their relationship with another household that has just moved in next door. Laura (Andrea Riseborough) takes the initiative in welcoming the new neighbors, with a particular interest in connecting with the young daughter Megan (Niamh Dornan). What starts as merely friendly banter soon turns into something much more complicated. Megan begins to exhibit behaviors reminiscent of Laura’s daughter, who passed away recently. These fleeting moments start to compound, and as painful memories are vividly resurrected, Laura’s obsession starts to morph into a dangerous paranoia quickly. The further she plunges the depths to uncover the answers to this mystery, the more frantic her mental state appears to unravel.

Riseborough is a performer who has been delivering stellar work for some time now, and this is yet another example of her outstanding abilities to disappear into a role fully. There is not some tremendous physical transformation that marks her portrayal, however, and it signals her talents even more that she is able to inhabit an ordinary woman faced with unusual circumstances that heighten her grief and trauma. She marvelously communicates the anxiety, fear, and hope that informs her perspective, and one cannot help but feel invested by her tenacious determination. Even in silent glances, Riseborough commands every moment with a powerful aura that can be quite the dynamic display. She is by far the best of the ensemble, even though Dornan does have her own moments of effectiveness that create an eerie dichotomy of childlike innocence against insidious intent. However, this is a showcase for the leading part, and it is impressively accomplished.

Stacey Gregg makes her directorial debut here, and her methods to slowly build the subtle tension through stark filmmaking are quite compelling. The quiet compositions set the tone for the slow descent into a more uneasy aura, and utilizing a moody score helps to underline the atmospheric suspense that slowly rises in hostility. At the same time, the film has difficulty maintaining such well-crafted stress due to a tedious pace that can often halt the momentum. Given this is not a particularly long film, those moments when the rhythm comes to a crawl can feel particularly enhanced. As the plot progresses, the film finds itself in the throes of more idiosyncratic decisions that undercut much of the more captivating sequences. The direction makes more experimental choices that undue the creepiness that was working so well, and the twists that are eventually revealed are messy in execution. Overall, there is undoubtedly a firm hand guiding this story, but its assemblage is not consistent enough in quality to be thoroughly intriguing.

While plenty of formidable pieces makes “Here Before” an alluring narrative, it must be said that the whole can often feel less than the sum of its parts. The approach does well to craft a world that is endearing in the exploration of a damaged individual, even though the more eccentric flourishes and laborious pace can diminish the ultimate impact. Yet, much of what is shown can be appreciated, and it is thanks to another brilliant performance from Andrea Riseborough that much of what is captured rests on her haunting presence. This may not be a truly exceptional entry into the landscape of psychological thrillers, but there are enough merits here that could keep one engrossed.