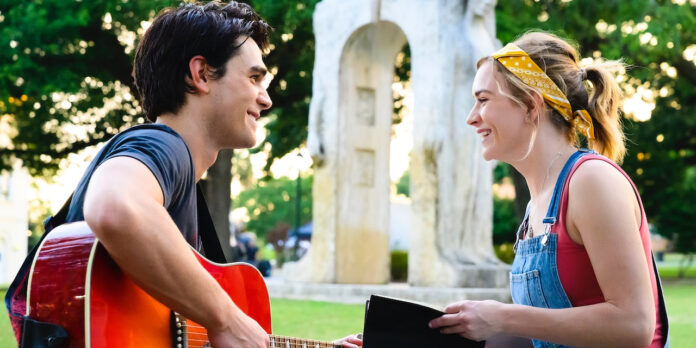 THE STORY – The true story of Christian music star Jeremy Camp and his journey of love and loss.

​​When one approaches the subject of faith-based films, there’s usually a significant range of not only quality but also the effectiveness of their subject matter. There are numerous films in which the messaging can come across as, for lack of a better term, preachy. That is to say, they play to the lowest common denominator and a basic theological perspective that is void of nuance and is often antagonistic. Sometimes you get examples of thoughtful filmmakers exploring their own conversations with these ideas, but they generally aren’t the kind that finds success with audiences. “I Still Believe” may be far from the absolute worst this genre offers, but its execution leaves a lot to be desired.

Inspired by true events, the story centers around the relationship between Jeremy Camp (K.J. Apa) and Melissa Henning (Britt Robertson). They meet in college just as Jeremy is beginning his career as a musician playing Christian ballads to adoring crowds. Their relationship soon grows stronger but is tested when Melissa is diagnosed with cancer. Despite this, Jeremy feels more devoted to her than ever and is certain that God’s plan has fated them to be together. They eventually marry and enjoy a brief yet passionate time together which gives them a deeper spiritual purpose.

The script by Jon Gunn and co-director Jon Erwin, adapted from Camp’s memoir, is often a messy and disorganized construction of sequences that struggle to give the film real momentum throughout its runtime. It also never gives the central relationship any sense that it grows organically, and its depictions of love come across as rudimentary and immature. Credit can be given for its messaging being more of a deeply personal relationship with God, one that doesn’t ask to judge others and even asks to consider both the spiritual and scientific sides of life. Much of that is severely undercut by events that happen toward the end of the film which, depending on your disposition, stretch credulity. Still, it’s more than can be said about Erwin and his brother Andrew’s direction, which is mostly bland and unremarkable.

Apa and Robertson have some chemistry and even turn in performances that are often charming and touching. Most of the emotional weight of the story is given to Robertson, and she manages to carry those scenes with a commanding presence. This is all the more remarkable given that her character doesn’t feel that developed, mostly serving as an emotional motivation for Jeremy. Melissa isn’t a well-written character, but Robertson does her best to bring some genuine pathos to her. Apa is fine, but he doesn’t bring a tremendous amount to the role either. There’s nothing truly astounding about his performance. He has a tenderness that works well with his portrayal but it’s also rather forgettable by the end.

There isn’t much to say about the supporting cast outside of Gary Sinise, who plays the patriarch of the Camp family. It’s not much of a role outside of devoted father that gives occasional sage advice, but being one of the most well-known members of the ensemble gives him the advantage of having a natural delivery that keeps his scenes compelling – this is true even when the material is shallow. The rest of the cast don’t really come across as strong performers, ranging from an obviously amateur Shania Twain as Jeremy’s mother to a completely wooden Nathan Parsons as a fellow singer entrapped in the initial love triangle.

While the totality of the film isn’t quite a disaster, there still isn’t enough here to make it a success either. Despite some decent performances from the cast, it’s mainly Robertson that delivers anything of value. Everyone else ranges from mediocre to poor, while the sloppy storytelling sinks whatever goodwill there is from the nuggets of enjoyable content. There are points to be given for the film not coming off as insultingly condescending, as many in this genre have done in the past. However, it also doesn’t seek to provide any interesting answers to the vague questions it presents.