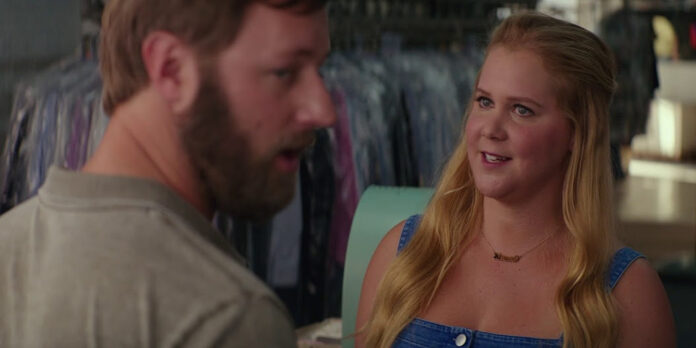 THE STORY – A woman who struggles with feelings of insecurity and inadequacy on a daily basis wakes from a fall believing she is suddenly the most beautiful and capable woman on the planet. With this newfound confidence, she is empowered to live her life fearlessly and flawlessly, but what will happen when she realizes her appearance never changed?

​It’s a tough loss when a comedy that boasts unabashed self-confidence misses the mark of going skin-deep. Abby Kohn and Marc Silverstein (“Never Been Kissed,” “How To Be Single,” “He’s Just Not That Into You”) collaborate as the writer/director duo behind the latest comedy, “I Feel Pretty.” We see Amy Schumer star in a role all her own, filled to the brim with as much crudeness and raunchy flare a PG-13 rating would allow. The film tackles the culture built on body shaming and how it affects our protagonist in bewildering ways, never once acknowledging its own tone-deaf perceptions. It fails to be the unconventional landmark of new wave feminism it thinks it is. While we can say it means well and will undoubtedly boost some people’s morale, “I Feel Pretty” stands as a reminder that we need to do better if we plan on going against the status quo of unrelenting beauty standards.

Amy Schumer (“Trainwreck“) is Renee, a woman who’s very much conflicted with her body image; something she’s reminded of every time she undresses in front of the mirror at night. She wants to know what it feels like to have guys flock to you in a drugstore and ask for your number. She wants to know what it’s like to be that “undeniable” kind of pretty; the kind they photograph in magazines and walk on runways. Her self-loathing just wants the beauty that calls back to Cindy Crawford’s prime. Renee encompasses an insecurity that’s universal, but the film just doesn’t know how to lift this off the ground. Renee has a decent job working for the web design of the high-end makeup brand, LeClaire. Huddled up in what looks like a basement for an office, she just wants some banter and a sense of liveliness with her coworker, a comically brooding Adrian Martinez. She has the job and the friends, but nothing would seem to comfort her more than being someone else.

After watching “Big,” she decides to take a dumb chance and throw a penny into a water fountain, wishing to be newly reformed as a “beautiful” woman. The next day, she decides to enroll in a SoulCycle class, hoping then she can feel the surge of confidence and self-improvement that always seems to escape her. While pedaling hard in momentous power, her bicycle malfunctions, knocking her off and causing a bad head injury. She wakes up to see that she’s been somehow magically transformed into a supermodel-like appearance (Although we see that she remains the same person).

The problems with the film begin here. As Renee struts her stuff with newfound confidence in the form of glamorous misconception, she begins to take chances that apparently only perfect women have the right to achieve. She applies for her dream job of being a receptionist to LeClaire Cosmetics, ran openly by Avery LeClaire, in a very underwhelming appearance by Michelle Williams. It’d be a pay cut from her technical job, but she doesn’t care. It’s clear she’s delusional and would do anything to be the cookie cutter image of this elite company. The job calls for an always stylish, confidence-exuding candidate, and she very well fits the bill now in her mind. It’s when you begin to see the way people recoil at her that really just makes you cringe. It’s not the second-hand embarrassment the world around her embodies, but it’s the notion that Renee’s able-bodied, clear-skinned, average weight self is being showcased as naturally repulsive. How have we progressed as a society when we are making films that only work to add self-punishment and disarray in the name of entertainment?

“I Feel Pretty” doesn’t even begin to scratch the surface of looking inward. Sure, we have a very sweet love interest in the form of Rory Scovel, who sees Renee’s glowing confidence and begins to fall in love with the person she is, but it uses cheap tactics to be something it’s simply not. The script does everything in its power to make Renee appear undesirable by normal standards. It lingers on demeaning her disposition and where she truly stands in comparison to thinner, chiseled body types. Not only is the message irreparably skewed, but it also doesn’t land many of its jokes. With Schumer generally being hit or miss, we find pleasant company with her two loving friends, played by Aidy Bryant and Busy Philips, who simply don’t get enough screen time.

There comes a point where you’ve been so looped into Renee’s make-believe joyride that it can’t conclude fast enough. And oh boy, it doesn’t quite hit the mark there either. As an appearance for the makeup line, it vows to bring self-confidence and body image into something we just feel on the inside out but casts an alarming shadow as a streamline to buying the newest blush and foundation. “I Feel Pretty” instead concludes to be a striking failure for comedy and tries endlessly to be the forefront of body image, when in reality, how we feel shouldn’t be exploited for humiliated contemplation.