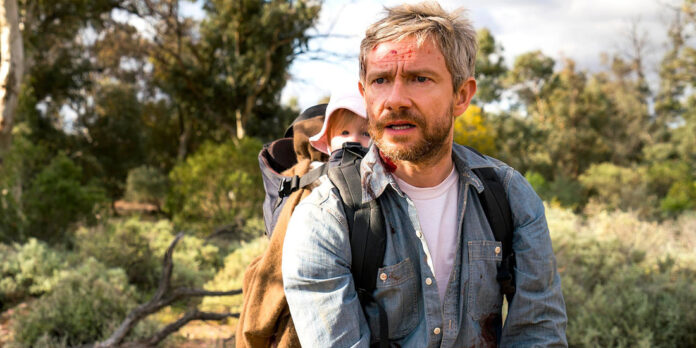 THE STORY – Stranded in rural Australia in the aftermath of a violent pandemic, an infected father desperately searches for a new home for his infant child and a means to protect her from his own changing nature.

​​​Netflix’s film “Cargo” may be a zombie movie, but don’t expect too much horror. This is a slow-moving drama set in a post-apocalyptic Australia. Rather than focus on the fear of zombies, “Cargo” explores the fear of fatherhood in such an environment. How would you care for your child, especially if your own life was threatened? An interesting question to be sure, but the film struggles to overcome genre cliches and pacing issues to explore the answer.

Yolanda Ramke and Ben Howling direct their first feature here, which is an adaptation of their successful short film of the same name. In a wise choice, “Cargo” doesn’t start with the traditional news montage or text explaining what’s happened to the world. It simply starts in the midst of it all, adding more mystery to the film’s first act. Andy, played by the reliably good Martin Freeman, has survived with his wife Kay (Susie Porter) and their baby, Rosie, floating down a river on a houseboat. With rations and time running out, the family finds themselves in a bad spot. It’s not long before Andy finds himself infected and alone with Rosie, leaving him with only 48 hours to find someone to care for his daughter.

Freeman’s performance is the soul of the film, and he carries it well. The emotion and weariness are palpable. We don’t get any backstory or real exposition, one of the biggest strengths of the film, so his past remains a mystery. Andy is still filled with the tragedy and pathos of a desperate father. He wanders the vast wilderness and encounters various other survivors, eventually pairing up with an Indigenous girl, Thoomi (Simone Landers).

The movie takes on an almost episodic style as Andy meets other survivors who might be able to take Rosie. These scenes make for engaging concepts themselves. Most fascinating of these is Vic (Anthony Hayes), the intense hunter/scavenger, and his “wife” Lorraine (Caren Pistorius). Their story alone could’ve made for a full feature. But Andy moves on from each of these groups before too long.

There aren’t a lot of stones left unturned by zombie movies as a whole. It’s rare to find unique ideas in the well-worn genre. “Cargo” doesn’t offer many either. It does its best to steer clear of the most obvious cliches, which helps, but there’s still not a great deal that separates this from the rest.

Giving Andy a race against time does make for something unique. The infection takes 48 hours to fully take hold. With his wife gone, he must search the Australian Outback for someone who will look after Rosie. This is an excellent premise with an inherent amount of tension, but the film’s pacing lacks any urgency. What should feel like a desperate race against the clock feels more like a wandering exploration of the terrain. Andy never feels in a rush to find someone for Rosie. He has tea, a nice long sleep, and we’re seldom reminded of the clock that’s running out. Additionally, most moments of huge emotional impact are abruptly cut away from, stopping them dead in their tracks. Instead of letting the actions themselves hit us, an overbearing score tries to highlight every significant moment.

This is a slower, more contemplative zombie movie, which can be refreshing. Still, this isn’t the right story for a slow pace. The film doesn’t make the audience feel the pressure of the clock. The full weight of caring for the child doesn’t hit us as much as it should when there’s little urgency. These questions of fatherhood in such a violent landscape aren’t answered with enough desperation. Lots of great ideas, and a solid leading man, but “Cargo” ends up shuffling along a bit too slow to make much of an impression.