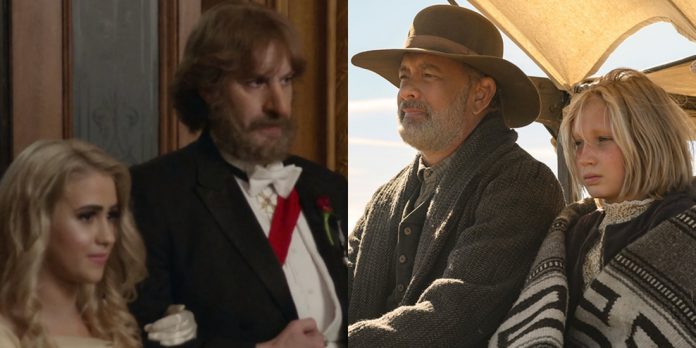 This fall features Tom Hanks in a movie about a man reduced to delivering news reports all across a divided America as he tries to rebuild his life. However, his life is truly changed when his path crosses with a very young girl who doesn’t speak much English and has been raised by a foreign culture considered backward by most of the United States. Yet traveling across the nation with a reluctant older guardian gives her a new spark of life, even as their cross-country journey is meant to end with the man dropping her off in a new home…And now that “Borat Subsequent Movie Film” has made Hanks a small part of that story, he is set to headline his own version of it in “News of the World” later this winter as well.

​Of course, “News of the World” was planned well in advance to be Hanks’ big fall 2020 movie. The only reason he is in a second movie this fall is because of tragic circumstances turned into comedy, as “Borat Subsequent Movie Film“ turns his COVID-19 diagnosis into part of a “The Usual Suspects“ style twist ending. Fittingly, that surprise was unveiled mere hours after the first full-length “News of the World” trailer came out, which was about 2 1/2 minutes longer than Hanks’ “Borat Subsequent Movie Film“ screen time.

At first glance, there should be absolutely nothing in common between “News of the World“ and “Borat Subsequent Movie Film“ other than the very thin Hanks connection. While “Borat Subsequent Movie Film“ is a deranged mockumentary comedy set in modern America and posted on Amazon, “News of the World“ is still determined to put its very serious story set in post-Civil War America in theaters. Plus if it happens to have any comedic bits, they may be the first-ever in director Paul Greengrass’s filmography. The best-case scenario leaves us with two months until “News of the World“ is released, which means any speculation about much of it is premature. Nonetheless, it is surprisingly easy to see how it could end up using the same basic story and same basic themes as “Borat Subsequent Movie Film“, only with a more obvious dramatic side and a far bigger Hanks role.

“Borat Subsequent Movie Film“ brings Borat back to America after his last visit 14 years ago wound up costing him everything. Now he is ‘reporting’ again as part of a last-ditch effort to get his life back, in a quest that drops him in the middle of an America more divided than it has been since the Civil War. As it so happens, “News of the World“ is set precisely in those times, or rather right after them. In the middle of that landscape is Hanks, who isn’t playing a journalist but is playing a former Civil War captain who now makes his living reading the news stories of actual journalists. Yet like Borat, finding an unconventional way of delivering news is Captain Jefferson Kyle Kidd’s only means of survival in a broken land after being nearly broken himself, or so it would appear. And like Borat, everything changes thanks in part to a little girl he has to deliver across America to a new home. 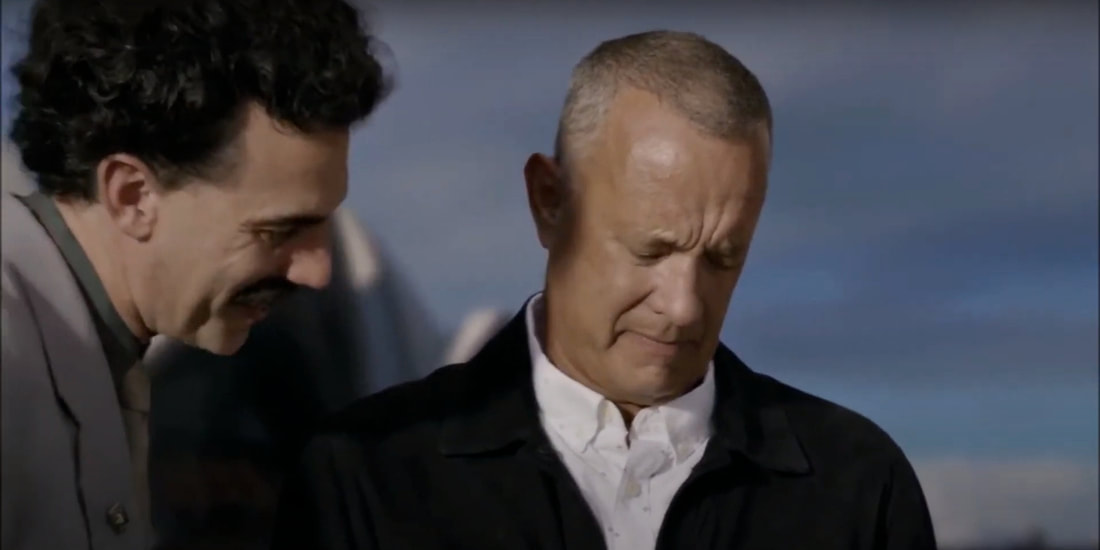 By now, most know that Borat’s little girl is his daughter Tutar, who is lower than a cow in the Borat version of Kazakhstan, and is little more than a means to an end for Borat as he plans to present her as a bribe to the Trump administration. She is fully indoctrinated and brainwashed by the sexist culture of her homeland, yet her belief in that culture and her father eventually shatters as she discovers how women live much differently in America. Tutar ultimately rebels against the idea of being a child-wife with no rights – though as the whole country knows now, that doesn’t stop her from trying it out anyway in a certain hotel room with a certain very older man. Yet right on time in so many ways, her father turns against the idea as well, which finally leads them both back home to discover the twist that includes Hanks’ cameo. When they do, it is Tutar who speaks out and makes the demands that save her father, improves Kazakhstan if only by default, and gives her a real somewhat equal place in the world by Borat’s side.

​Few expected something like “Borat Subsequent Movie Film“ to tell a real story of a young girl finding herself, as she’s caught between cultures while navigating a troubled nation with a man who initially wants little to do with her. But as it stands, now Tutar’s comedic journey has set the bar for “News of the World“ to match it in a far more dramatic fashion, with a different kind of outsider girl in young Johanna. In this case, Johanna is a girl who was raised for years by a Native American tribe that killed her birth parents. Yet when her path crosses with Captain Kidd, he is tasked with bringing her to the only birth family she has left, even though she is half-wild and speaks almost no English, almost like Tutar. Captain Kidd isn’t selling Johanna to be married to a notorious American man. Otherwise, he seems to follow the “Borat” formula of a lost older man on a road trip through a broken America, with a strange girl he wants to drop off and leave as soon as possible. In between, both Borat and Captain Kidd make time to deliver journalistic reports of a sort, which was their sole means of survival left before getting saddled with a female partner. Like Tutar, Johanna comes out of a culture regularly stereotyped by Americans as savage, prejudicial and backwards compared to our own. At least in “News of the World,“ there’s a slightly better chance that the image of Native Americans won’t be used as a punchline, if addressed at all. Yet the main thrust of the movie is likely to be the growing bond between Captain Kidd and Johanna, as they try to find a new place in an America still eager to tear itself apart.

Almost as eagerly as it is trying to do again 140 years later, in Borat and Tutar’s own odyssey that ends in a growing bond of their own. If anything, “News of the World“ is bound to be compared for months on end to “The Searchers,” another Western featuring the biggest icon of his time and a young girl more at home with Native Americans than her birth family. Of course, Hanks is unlikely to go as dark as John Wayne did, regardless of whether Greengrass is trying to be the next John Ford. Those comparisons may get drawn up no matter how “News of the World“ turns out. Regardless, it may be more revealing to recognize it already has a more modern and much more unlikely companion piece of sorts.

​It isn’t that uncommon for an Oscar-bait drama to have more in common with a far different yet structurally similar comedy. Two years ago, many had their fun pointing out that “Bohemian Rhapsody“ was the exact same movie as “Walk Hard,” which spoofed the musical biopic genre long before “Bohemian Rhapsody“ made its infamous contribution to it. Of course, playing out exactly like a spoof version of the same formula did far less harm with Oscar voters than it did with critics. “News of the World“ is surely bound to be less controversial, less cavalier with its historical setting and far less tainted by the people making it. Nevertheless, like “Bohemian Rhapsody,” it might well end up that a cartoonish R-rated comedy beat an Oscar-contending drama to the punch in effectively telling the same story.

“Borat Subsequent Movie Film“ has already set the bar in showing a newsreader navigating an America hopelessly divided in two. It also set the bar in showing such a man finding a new lease on life, in bonding with a little girl he originally planned to leave behind after a long road trip. Playing that girl has already made Maria Bakalova into a Film Twitter darling some have started trying to push into the Oscar race – although Helena Zengel may still be the most likely newcomer to crack Supporting Actress for playing a young girl trapped between cultures as she travels cross-country with an unlikely father figure. This might all be moot if “News of the World“ is moved back and out of the race thanks to COVID. But if “Borat Subsequent Movie Film“ turns out to be the only Tom Hanks film in fall/winter 2020, it would be all the more ironic for showing an alternative reason why. If “News of the World“ does get shown somewhere in the next few months, it still wouldn’t be odd to feel like we’ve already seen its story told very recently – even if this version doesn’t have “tucks”, moonblood dancing, a daughter owner’s manual or star-studded homages to 25-year-old twists.

Have you seen “Borat Subsequent Movie Film?” If so, what did you think? Are you excited to see Tom Hanks later this year in “News of the World?” Let us know in the comments section below or on our Twitter account.