How Netflix’s “The Haunting” Elevates The Horror Genre 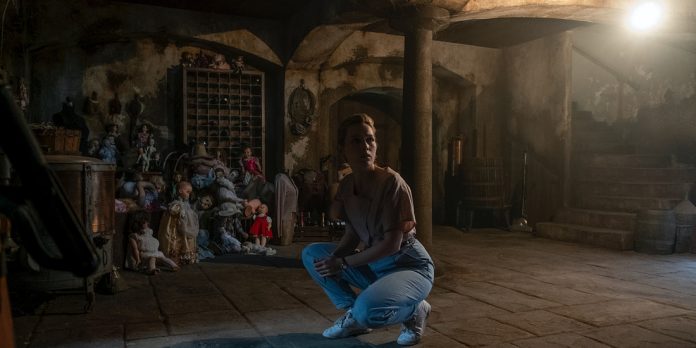 By Lauren LaMagna
​
For a few years now, Netflix has been at the forefront of the Golden Age of television. Starting with “House of Cards” and “Orange Is the New Black” in 2013, the streaming service has been relying on niche audiences, resulting in stories that might not have been on television otherwise. From the British drama “The Crown” to the science-fiction ‘80s-inspired “Stranger Things” and the absurd comedy “Unbreakable Kimmy Schmidt,” Netflix has allowed artists to tell the stories they’ve wanted to tell that might not have fit the network mold. Luckily, this has rewarded Netflix with hundreds of thousands of views and multiple Emmys. Some of these shows are destined for greatness and critical acclaim, but others are surprises.

In the fall of 2018, “The Haunting of Hill House” premiered on Netflix. The ten-episode show loosely based on Shirley Jackson’s novel seemed like the perfect show for subscribers to watch during the Halloween season. But what the average viewer (and non-die-hard horror fan) didn’t know was that this was a Mike Flanagan (“Doctor Sleep“) production, and he takes horror to a whole new level.

“The Haunting of Hill House” was arguably the shock of the 2018-2019 television season. The story follows a family of seven during their dreadful stay in a haunted house and the effects of that experience years later. The following Halloween, people were dressing up as the characters (The Bent-Neck Lady and Theo were the popular choices), quoting the show, and figuring out who can spot the most (if not all) the hidden ghosts that populated each episode.

Last week, the second series of “The Haunting,” now an anthology, “The Haunting of Bly Manor” premiered on Netflix. “Bly Manor,” based on the novella “The Turning of the Screw” by Henry James, follows a young au pair, Dani (Victoria Pedretti), who cares for two peculiar children in the British countryside. Within the premiere weekend, “Bly Manor” was the number one stream in multiple countries and cements how Mike Flanagan and company have truly changed the horror genre.

“The Haunting” series truthfully elevates the horror genre because of how Flanagan bases his stories. Both “Hill House” and “Bly Manor” aren’t just haunted house stories. One can even say that they, especially the latter, aren’t what an average watcher would consider “horror” to be, but Flanagan introduced us to his version of horror with “Hill House.” Sure, there are jump scares, eerie imagery, ghosts, and other gothic elements involved, but at its core, “Hill House” is a family drama. It’s about six estranged individuals who, by the end of the show, learn to become a family again. “Bly Manor” uses that same concept. It’s not about the scary house, it’s about who is in the scary house.

That’s what makes “The Haunting” series and Mike Flanagan’s work so groundbreaking and rare. The story isn’t centered around the monsters or ghosts or supernatural. It’s about people dealing with and going through dramatic and/or traumatic events. It’s about how we cope with upsetting, frightening, and painful moments and events in our lives – we lock them up, throw them in a closet, and seek distractions or even turn it into a ghost. We are all haunted by something.

The Crain children of “Hill House” are all haunted to different extents by the events that lead to their mother’s death. In “Bly Manor,” Dani is haunted by survivor’s guilt and internalized homophobia; Henry (Henry Thomas) is also haunted by guilt; Peter Quint (Oliver Jackson-Cohen) is haunted by childhood abuse; and Miles and Flora (Benjamin Evan Ainsworth and Amelie Bea Smith) are struggling to exist in a world without their parents. “The Haunting” is about trauma and relationships. It’s also how humans deal with and overcome their trauma, which is why horror is the best genre for these types of stories.

In the second series, Flanagan and his team also expand on the idea of the ghost story from “Hill House.” Within the first series, the story is told from the perspective of the haunted: The Crain children, Mike, Shirley, Theo, Luke, and Nell. On one hand, “Bly Manor” is also about the haunted: Dani, Owen, Flora, Miles, and Henry. But it’s also about the haunters. Two of the nine episodes of “Bly Manor” are centered around specific ghosts of the manor: Hannah Grose (T’Nia Miller) in episode five and Viola Willoughby (Kate Siegel) in episode eight. Within this season of “The Haunting,” the haunted and haunters are given equal weight. Why? Because the ghosts were once people too. They had relationships, loved ones, and purpose. Some even still have lessons to learn. Their actions have merit and reasoning behind it. The antagonist for one story is the protagonist for another, after all. By including these character-centric episodes, the ghosts aren’t just “ghosts” that haunt the inhabitants of Bly Manor anymore – they’re fully drawn out characters that are just as complicated as the living ones. All in all, these ghosts have stories to tell and those stories are just as important as the stories of the living.

In the final episode of “Bly Manor,” a young woman tells the Narrator (Carla Gugino) that she described the story wrong. “You said it was a ghost story. It isn’t,” she says. “It’s a love story.” To which the Narrator smiles and states, “Same thing, really.” It is said that the test of a great horror story is if it works without the horror elements. Meaning, without the jump scares and monsters under the bed, would the story work? Or would it bore an audience? Basically, if the audience doesn’t care for the characters, they don’t care what happens to them. Fortunately, that’s never an option when it comes to “The Haunting.” Within both “Hill House” and “Bly Manor,” Mike Flanagan and his troupe of actors, writers, and directors, tell deeply human stories that aren’t dependent on the genre but are magnified and supported by it. And when one sees that, you truly understand that, yes, a ghost story, a powerful ghost story, is at its core. A beautiful love story after all.

Have you seen either “The Haunting of Hill House” or “The Haunting of Bly Manor” yet? If so, what do you think? Do you have any other recommendations for horror shows which people can stream right now? Let us know your thoughts in the comments section below or on our Twitter account.