“ONE MAN AND HIS SHOES” 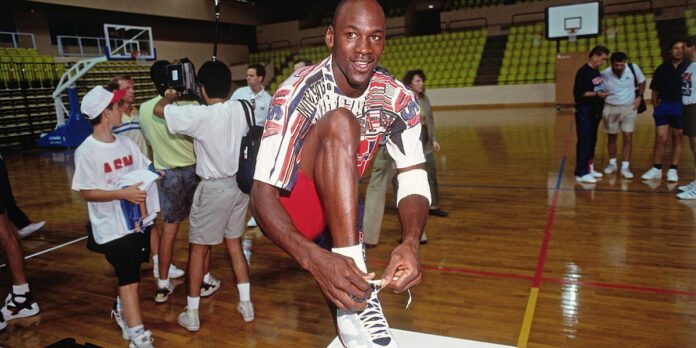 THE STORY – Telling the story of the phenomenon of Air Jordan sneakers showing their social, cultural and racial significance and how ground-breaking marketing strategies created a multi-billion-dollar business.
​
THE CAST – David Falk, Jemele Hill & Scoop Jackson

10/21/2020
​By James Palmer
​
It’s fair to say interest in old-school basketball has reached its all-time high in 2020. “The Last Dance” became event television watching and was one of the most talked-about programs during the quarantine lockdown. The NBA also orchestrated one of the most organized bubbles we’ve seen to complete the basketball season and stood forward for real social change, broadcasting their messages of social equality and police reform loud and clear on the court. “One Man and His Shoes” decides to take the overall nostalgia trip of this era and focus it on one thing only – sneakers.

Not just any sneakers though, this is the story of Air Jordan’s and the phenomenon that came with them as much as the player himself. Set in a talking-heads style with various professionals, Nike employees, journalists, etc. – we are told about how these shoes changed the game. With Michael Jordan came the rise of the NBA. Previous stars like Larry Bird and Magic Johnson are shown but they mention that a key thing is lacking within the NBA market – coolness. Magic and Larry are shown advertising Converse, one of the biggest brands at the time alongside Adidas but it seems plain. Nike at the time, as quoted by Jemele Hill “was like a stepchild” – they were not serious competitors at all. But a few inside the building stated the importance of Michael Jordan and signed a bumper deal with him. From here we see the rise of Nike, Air Jordan and Michael Jordan all at once. It does a great job of using archival footage to demonstrate Nike’s bold advertising in making these shoes a “must-buy.”

All the trades and tricks of the capitalist book are placed on display and explained by the array of narrators. Air Jordan’s being in limited stock and only allowing one pair per customer plays on the typical supply and demand chain that most businesses thrive on. But as well as that we hear how these shoes became their own thing rather than a pair of sneakers. The best part of the film is when we learn of Spike Lee’s role in all of this: the advertisements he shot for Nike and the inclusions of the trainers in his films. “Do the Right Thing” is shown where Giancarlo Esposito is threatening a man after he ruined his brand new Jordan’s – a statement that would make “the shoes their own character.” Spike Lee’s uncanny style of filmmaking is also seen in his adverts – a highlight from the film which may just be due to the fact we’re watching Spike Lee’s work.

It isn’t just the coolness and availability of these that make them a success; it’s also the cultural significance at the time. Using the era of the crack pandemic and the Rodney King riots too, it’s shown that Air Jordan were supposedly making a statement. It tries to relate this to Nike’s current involvement with Colin Kaepernick and the Black Lives Matter protests but seems to be reaching given the fact that players like Kaepernick and LeBron James have risked their careers to bring about social change while Michael Jordan and the Jordan brand have been repeatedly quiet on these matters.

The documentary seems to lose itself when we reach the top of the Air Jordan’s rise. There are snippets of people showcasing their collections around the world from Europe to Asia, with a man having a room not only full of sneakers but also cereal boxes, Gatorade, etc. all as promotional material to Michael Jordan. It’s clear that Michael Jordan made the NBA what it was. He brought an unjust amount of cool, talent and stardom to it – changing the game and doing whatever he wanted to do (this being shown when he wore his own red sneakers to a game despite the rule of white-trainers only at the time). But while the film is still complimenting the brands in exploiting people and rising to the top, it then starts to criticize it for doing so. It seems like a conflict of interest, but “One Man and His Shoes” now talks about these adverts like they’re propaganda. News reports from the time are shown where kids are fighting in desperation to get these shoes and has a segment with a mother whose son was shot because he was wearing a rare pair of Jordan’s. This would have been more impactful and could have really criticized the foundations that Nike and Jordan were built on – if it hadn’t been given the highest of praise during the first half of the film.

“One Man and His Shoes” ends up becoming a convoluted mess that no doubt, uses the success of “The Last Dance” to its advantage. It still remains enjoyable and entertaining if you enjoy the sport or the ESPN documentary but gives a mixed feeling to it. Its final message on Nike’s $3 billion revenue and Michael Jordan refusing to be involved with the film would have hit harder if it had felt like a critical piece at the outset.