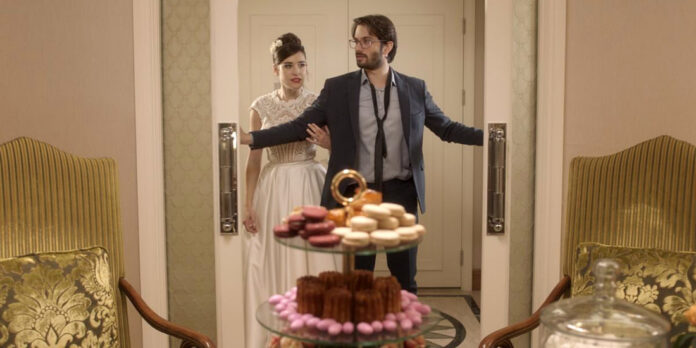 THE STORY – Giddily exhausted newlyweds, a luxury honeymoon hotel suite and the discovered gift of an ex-girlfriend’s ring – happily-ever-afters need stronger foundations than this. The bride and groom’s escalating feud sends them out into the city at night, ostensibly to confirm if marriage was the right answer, but actually unearthing thornier questions about individual hopes and fears.
​
THE CAST – Ran Danker & Avigail Harari

Kicking off the press screenings for this year’s London Film Festival was the comedy-drama “Honeymood,” written and directed by Talya Lavie. Set in Jerusalem, the film opens with a recently married couple checking in to their honeymoon suite on the night of their wedding. Whilst we’re initially introduced to the bride (Avigail Harari) and groom (Ran Danker), we see the relationship between them as quite a flirtatious yet teasing relationship. After settling into the room, they re-enter with her being carried to avoid any bad luck or to assure it’s done right. There are plenty of niche moments that define the relationship here, but all this is quickly interrupted when the groom receives a wedding gift from his ex-girlfriend. A fight then ensues and they soon find themselves apart from one another, derailing into an all-night odyssey.

If “Eyes Wide Shut” was a less sexy late-night comedy, it would be similar to “Honeymood” as the bride and groom both encounter past lovers, repressed doubts and bizarre characters that fill the streets of Jerusalem. Both actors do what they can but it’s clear that Lavie favored Harari’s portrayal of the bride who helps set the tone of the film. Whilst lacking in any laugh out loud moments or expertly written dialogue, “Honeymood” works on the basis of being light and fluffy, encountering odd scenarios and that being the comedy to make this marriage on the rocks feel lighter than it actually is. Harari is by far the best part of the film with each new interaction she has, highlighted brilliantly by a sequence where she dances with numerous security guards after ending up down the wrong street.

​Whilst there isn’t much to say about the film, it’s a perfectly enjoyable snippet of two characters dealing with their own moral thoughts after the biggest day of their life. Lavie works out what drives most marriages apart, looking at jealousy and guilt and playing them into her own.

Reconciliation is always clear though and an ending set at the back of a police car has a feeling opposite to “The Graduate.” Whilst these two are still young, they’ve clearly made the right choice and have the rest of their lives to look forward to. Young love can be as strong as any other and it’s clear in “Honeymood” that even a surreal urban night apart from one another, can only make that bond stronger.