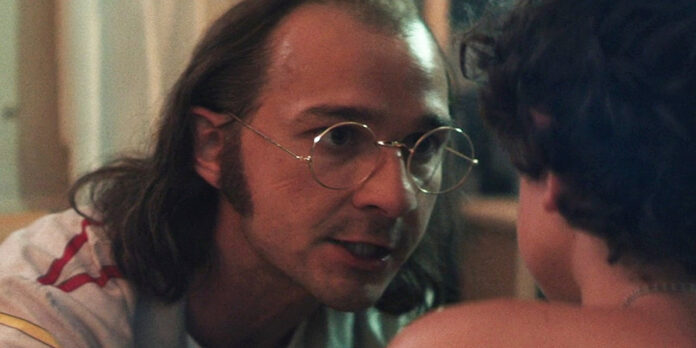 THE STORY – A young actor tries to reconcile with his father after surviving a turbulent childhood.

​​​​Shia LaBeouf has had a troubled past amidst his success as an actor, with multiple arrests and periods in rehabilitation. His latest movie was written as part of his rehab program after being diagnosed with PTSD from his childhood. The film certainly sheds light on LaBeouf’s previous behavior and made me reconsider how I’ve viewed his actions in the past. “Honey Boy” is a semi-autobiographical film based on LaBeouf’s unconventional childhood and relationship with his father.

The film jumps back and forth between a 12-year-old Otis Lort (Noah Jupe) and his father, James Lort (LaBeouf), and 22-year-old Otis (Lucas Hedges). As older Otis is in rehab, he reflects back on his childhood living with his father in a motel and acting in movies. Otis’s father James is a former clown, a recovering alcoholic, and overall not fit to care for a child. Despite all of this, Otis adores him even as he is frustrated by him.
LaBeouf’s screenplay is certainly original and manages to go between the two time periods fairly seamlessly. The movie is rather of course, in language and subject, which could be off-putting to some viewers though it definitely serves a purpose. While the movie can feel repetitive and makes its point, again and again, the father-son relationship is built very well. It’s easy to feel the pain on both sides of the relationship as the film depicts not just Otis’s disappointment in his father, but also James’s disappointment in himself.

It can’t be an easy feat to direct an actor in a film that he wrote based on his own life, but Alma Har’el pulls it off well. While the film can feel messy at times, it seems purposeful and the entire film is cohesive in aesthetic and feeling. At times, it seems less like a narrative and more a character study of a father-son relationship as the older Otis looks back on what landed him in rehab.

There is a sort of haze to the movie that feels appropriate in one looking back on with addiction and trauma, without ever losing its authenticity. The cinematography is exemplary, and yes – as in any good coming-of-age movie these days – there are some really nicely done pool scenes.
Young Noah Jupe gives a fantastic performance as the younger Otis, going from childlike happiness to intense sadness and suffering from seeming ease. He displays emotions that seem starkly in contrast with his youthful appearance. It reminds me of the sort of youth performance that marks someone for future greatness like Saoirse Ronan in “Atonement” or Tom Holland in “The Impossible.”

Lucas Hedges steps away from his normal casting type in the role of the older Otis as he yells and breaks down in rehab, trying to get to the bottom of his diagnosis with PTSD. While the film really shines in its flashbacks, Hedges’s performance is one of his best to date. As good as Jupe and Hedges are, the star of the film is clearly Shia LeBeouf as James Lort. While writing this script was a part of his rehab, LaBeouf playing the role based on his own father feels like watching therapy happen onscreen. It’s an intense performance, and at times very uncomfortable to watch. From his long hair and glasses to his sort of pathetic clown tricks to the way James’s emotions turn on a dime, LaBeouf builds a portrait of this man so well that he disappears into the role. He exudes charisma but in an extremely off-putting way that we don’t often see onscreen.

This film will not be for everyone, but it’s a massive achievement for Har’el, Jupe, Hedges, and of course LaBeouf himself. Above all else, it is vulnerable and a sensitive view of a problematic relationship. Everything from the script to the performances feels raw and bursting with emotion. “Honey Boy” may not be a masterpiece of a movie, but it feels like an achievement in healing through film.