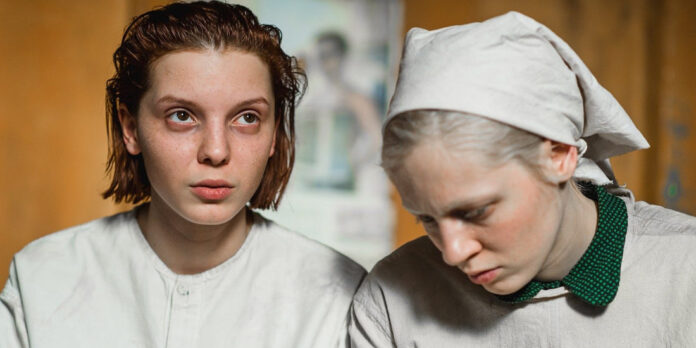 THE STORY – In war-torn Leningrad, Two young women, Iya and Masha, search for a means to rebuild their lives amongst the ruins. When tragedy strikes again, their friendship is put to the ultimate test.

​​​​​​​​​It’s hard to believe that “Beanpole” is only the second feature film from twenty-eight-year-old director Kantemir Balagov, such is the level of maturity in his work. “Beanpole” is a piece of pure cinema, and is masterfully crafted by Balagov. At this year’s Cannes, Balagov won the Un Certain Regard Best Director Award and the FIPRESCI Prize for Best Film in the Un Certain Regard section, and the film has been selected as Russian entry for the Best International Feature Film at the 92nd Academy Awards. This epic film captures a city and its people trying to recover and rebuild after the devastating effects of war, and while “Beanpole” is a tough watch, it is a rewarding one as it is a powerful film about motherhood and companionship.

The film opens with a static mid-shot focusing on Iya (Viktoria Miroshnichenko), a woman who is nicknamed ‘Beanpole’ because of her height. Iya stands rooted to the spot in a daze, emitting a low groaning sound. Iya is completely lost in her own pain and suffering, and she appears to do this sort of thing on a regular basis as the other women around her comment to each other. Since the end of the second world war, Iya has been working in a Leningrad hospital tending to the soldiers of the red army. In her previous employment, Iya herself was on the front lines, and it’s clear that she has been left suffering from PTSD as a result.

Iya has been looking after her friend Masha’s (Vasilisa Perelygina) infant son Pashka (Timofey Glazkov) as the other woman stayed behind in order to act out revenge for the death of Pashka’s father. Iya treats Pashka as if he was her own son, and the film’s opening minutes are a display of touching intimate moments between the two, but this bliss ends abruptly with Pashka’s death which Iya is responsible for. Masha returns only to be greeted with the worst news possible.

With the death of her child, Masha becomes determined to become pregnant again, as she states she needs to have a human life inside her. She has attracted the affections of the son of a party official, Sasha (Igor Shirokov), who Iya takes a dislike to. However, after one too many botched abortions Masha is unable to bore any more children, that’s where Iya will step in as a surrogate of sorts. Masha’s request may prove to be the ultimate test of their friendship.

Balagov also beautifully presents us with a wide variety of different supporting characters who all have their own tragic backstories. There is Stepan (Konstantin Balakirev), an ex-soldier who is currently residing at the hospital. He can’t feel anything below his neck and pleads for an escape from his living hell. As well as Nikolay Ivanovich (Andrey Bykov), the chief medic who may be a possible ally for Iya, and also suffers from his own tragic past.

“Beanpole” is reminiscent of Cristian Mungiu’s “4 Months, 3 Weeks, and 2 Days,” in its grim depiction of life under communist rule and its depiction of female friendship. Both films make excellent use of color, with “Beanpole” having a recurring motif of the colors green and red, which is mostly associated with Perlygina’s Masha. Comparisons have also been made to Ingmar Bergman’s work, and the relationship between the two women is reminiscent of Bergman’s “Persona”, a film that deals with complexities of friendship and repressed romance between two women who are both struggling with the inner turmoils of depression and grief.

Where the film excels is in its central performances, with both Miroshnichenko and Perelygina capturing the trauma that these two women have encountered during their journeys. Both women have their own unique, and fully rounded personalities with each actress brilliantly complemented each other. It’s incredible to realize that both actresses are newcomers.

The film’s cinematography by Kseniya Sereda is also a highlight, with the camera capturing the claustrophobic setting of the women’s apartment, as their relationship becomes strained the camera frame becomes tighter reflecting this tense strain. The film’s screenplay is expertly written by Balagov and Aleksandr Terekhov, who drew inspiration from Svetlana Alexievich’s book The Unwomanly Face of War, an oral history of some of the million women who served in the Red Army.

“Beanpole” is not without its moments of comedic release, in one scene the patients of the hospital try to get Pashka to bark like a dog, only for one of the men to comment that the boy probably hasn’t seen a dog as they’ve all been eaten (a reference to the siege of Leningrad). It is these pockets of comedy that allow the film to breathe and for the viewer to collect themselves. “Beanpole” is not an easy watch, it’s long and the subject matter can be hard to handle in places, but there’s much to admire here, and Balagov manages to capture the true cost of war and the lasting damage it can have not only on the individual but on the collective as well.