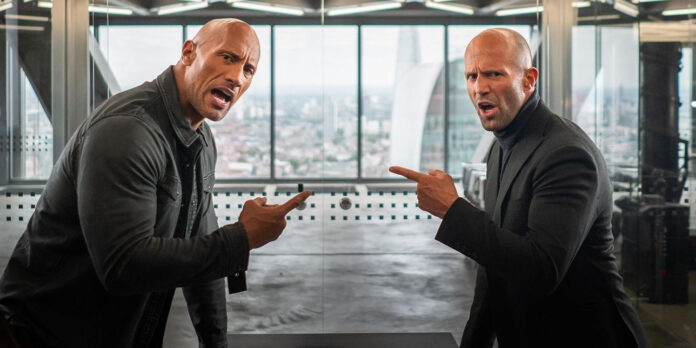 THE STORY – Ever since hulking lawman Hobbs (Johnson), a loyal agent of America’s Diplomatic Security Service, and lawless outcast Shaw (Statham), a former British military elite operative, first faced off in 2015’s Furious 7, the duo have swapped smack talk and body blows as they’ve tried to take each other down. But when cyber-genetically enhanced anarchist Brixton (Idris Elba) gains control of an insidious bio-threat that could alter humanity forever — and bests a brilliant and fearless rogue MI6 agent (The Crown’s Vanessa Kirby), who just happens to be Shaw’s sister — these two sworn enemies will have to partner up to bring down the only guy who might be badder than themselves.
​
THE CAST – Dwayne Johnson, Jason Statham, Idris Elba, Vanessa Kirby & Helen Mirren

​​Every summer needs its “Hobbs and Shaw.” Aka. The audacious, big, dumb action movie that serves no purpose other than to make hundreds of millions of dollars off of our lust for adrenaline-pumping machoism. Featuring two of the manliest men on the planet, in a spin-off that fans of “The Fast And The Furious” franchise thought would be a great idea, this reality of a film defies physics, believability and every other rule you can imagine for our entertainment. Does it fully succeed? Yes and no.

Taking place after the events of “The Fate Of The Furious,” officer Hobbs (Dwayne Johnson) of America’s Diplomatic Security Service, is called in by the CIA to track down a rogue MI6 agent (Vanessa Kirby), who has killed her entire team and stolen a deadly virus with the ability to wipe out a portion of mankind. Unbeknownst to him, lawless outcast Shaw (Jason Statham) has also been called in for the mission, specifically because the MI6 agent is his sister. Forced to work together against their will, they must learn to set aside their differences if they’re going to take down a half-man, half-machine, genetically enhanced anarchist named Brixton (Idris Elba) who is also after the virus and calls himself the “black Superman.”

The best thing that “Hobbs and Shaw” has working for it is the stylistic direction from David Leitch, who is no stranger to the action genre, giving us “John Wick,” “Atomic Blonde” and “Deadpool 2.” The way he shoots hand-to-hand fight choreography is wide and fluid, allowing the audience to see every move the characters make with clarity. The credit there is also shared with Dwayne Johnson, Jason Statham, Vanessa Kirby, and Idris Elba to a certain extent. There’s no doubt that they worked very hard with some of these fight scenes and of course, they’re all in ridiculously committed physical shape. However, if you’re looking for it, you’ll notice too many occasional awkward moments when the stars are missing their marks and the stuntmen are waiting for them to make their next move instead of attacking. It makes the action more impactful and less chaotic, but I much prefer the fighting style of films such as “The Raid” than this. There is also some inspired lighting and staging, which helps to keep this nearly two and a half-hour action film consistently eye-popping with some catchy songs to boost your eardrums. While all of the practical effects are done very well, there are more than a few noticeable moments where the visual effects don’t hold up under scrutiny all that well. And finally, we come to the editing, which in my opinion is the film’s most inspired utilization under the watchful eye of Director Leitch and editor Christopher Rouse (“The Bourne Ultimatum” and “Captain Phillips”). Slow-motion is used effectively, a split-screen montage at the beginning of the film is used to show the contrast between the two main characters daily morning routine and as stated above, the action scenes are always clear and move with purpose.

All of these great technical elements suggest that “Hobbs and Shaw” is a worthwhile time at the movies for fans of these actors and of “The Fast And The Furious” franchise. However, for more critical viewers such as myself, the film’s screenplay reminds us that this is another silly action film through and through. There are times where the film is definitely aware of its own silliness and it leans into that. Dwayne Johnson’s real-life personality is so heavily incorporated into the film that it feels like the screenplay was written by him for him. The first half of the film focuses more on the Shaw family as the action is set in their home of London, which to be fair, is where a lot of action films are set. Then it moves to a climactic showdown in The Rock’s ancestral home of Samoa with members of his family (including WWE Superstar Roman Reigns, in a very distracting speechless cameo), which is not where a lot of action films are set. It’s very silly and feels like it’s catering too much to who Dwayne Johnson is, instead of who Hobbs is. Then again, maybe I should remind myself that Dwayne Johnson is never playing a character in any of his movies. He’s playing a fictional superhero version of himself and this has never been more apparent than it is here. It’s more distracting than anything as it feels like Dwayne Johnson wrote the screenplay himself, to make the entire movie about him. His fans will undoubtedly love this and I cannot deny that it is a rather unique way to end “Hobbs and Shaw” but I’m not done there. Remember when I said, the film feels overly-scripted? Let’s just say there are two actors in this movie who show up as a complete surprise, each one tied to another person involved in the production in some way and they’re entirely here for comical relief. However, when the comical talent and chemistry between Johnson and Statham is already this strong, the inclusion of these two other very big actors in large supporting roles is overwhelming and unnecessary, considering both of their presence are milked for all they’re worth to film’s detriment in terms of its pacing.

Dwayne Johnson, Jason Statham, Vanessa Kirby, and Idris Elba all perform their roles very well. All of them possess natural charisma which keeps us focused on the action and trajectory of these characters throughout the bloated and overstuffed “Hobbs and Shaw.” See it for them, turn your brain off to the screenplay, fasten your seatbelts and enjoy the ride. Because believe me, this isn’t the last time you’ll see Hobbs and Shaw team up on the screen, so you might as well get used to it.