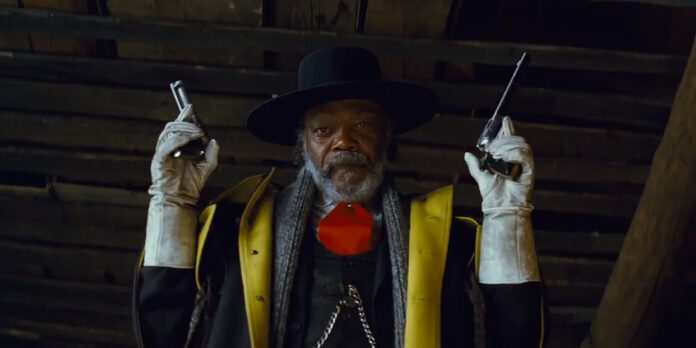 THE STORY – While racing toward the town of Red Rock in post-Civil War Wyoming, bounty hunter John “The Hangman” Ruth (Kurt Russell) and his fugitive prisoner (Jennifer Jason Leigh) encounter another bounty hunter (Samuel L. Jackson) and a man who claims to be a sheriff. Hoping to find shelter from a blizzard, the group travels to a stagecoach stopover located on a mountain pass. Greeted there by four strangers, the eight travelers soon learn that they may not make it to their destination after all.
​
THE CAST – Samuel L. Jackson, Kurt Russell, Jennifer Jason Leigh, Walton Goggins, Demián Bichir, Tim Roth, Michael Madsen, Bruce Dern, James Parks & Channing Tatum
​
THE TEAM – Quentin Tarantino (Director/Writer)

​​Few filmmakers have been able to continue their relevancy in the culture quite like Quentin Tarantino. For a man who seems to constantly lament his future demise of artistic merit, he consistently knows how to make vibrant pieces of art that create stirring debates within our culture. It’s a practice he’s been doing for close to thirty years at this point, and it’s always a welcomed element to his work. This particular film is no different, perhaps the most divisive film he has ever released. Opinions run wild on this one, but for me, it represents a deeply layered look at the state of the world and the choices we make to survive. It is a shining achievement in Tarantino’s filmography and a great piece of work.

The film’s story unfolds in a very intimate setting, mostly throughout the course of a single day. A group of strangers has gathered together in a cabin that is on the outskirts of the more populated town of Red Rock. The individuals include Civil War vet-turned-bounty hunter Major Marquis Warren (Samuel L. Jackson), fellow bounty hunter John Ruth (Kurt Russell), Ruth’s captured cargo Daisy (Jennifer Jason Leigh), the supposed incoming sheriff Chris Mannix (Walton Goggins) and a slew other characters whose intentions are masked from the start and slowly reveal themselves as the close proximity ignites further complications between the group.

Tarantino is a filmmaker who knows exactly what he is doing in terms of a storyteller, and often that dedication can lead to brashness that is unpleasant for many. There is no doubt that he intends to create a scene here that is filled with vile and despicable characters, but in doing so, he also provides a thematically layered story that can be richly explored. These characters represent so many shades of the world landscape, with a particular eye toward America. Hatred seethes from some, is more subdued in others, but is always tolerated if the group is to survive. Tarantino understands that all these people are terrible, but their villainy is also the asset they must work with to succeed. The screenplay does drive at its racist tones with an unapologetic perspective, but it illuminates the complexities that can encompass them as well. It can be indulgent, like most Tarantino’s screenplays, but there is a thematic effectiveness to this one that is appreciated.

It is also fascinating to see how Tarantino builds from that screenplay into a directorial presence that feels somewhat unique to his films. Because most of the action takes place in one or two locations, there is not the opportunity to create grand spectacles as he has in previous films. Here, Tarantino brings a theatricality to his direction, staging the players as if they were in an actual theater. He manages to strike the delicate balance of keeping the intimacy of a stage while still infusing the material with enough cinematic flourishes to keep it from feeling too constrained. It is an incredibly assured directorial achievement, one that finds new ways to become invested in this focused story. It also helps that he is aided by many technical aspects, most notably Ennio Morricone’s engaging score.

As is usually the case, a great set of actors have been assembled here and nearly all of them are delivering stellar work. This is helped by the nature of the story that forces these characters to constantly present themselves in a state of performance, and it helps to add layers of complexity to the acting. Jackson is phenomenal as the film’s main anti-hero, a gunslinger who finds equal joy in exposing the villains as he does disposing of them with a sly smile. Russell is full of charming screen presence, Goggins manages to have charisma even as a despicable racist, and Leigh delivers an outlandishly devilish turn as well.

The rest of the cast also delivers, with particular highlights coming from Tim Roth and Bruce Dern as other inhabitants of the haberdashery. The former indulges in such a delightful display that plays to his strengths as a performer, while the former’s crotchety persona perfectly fits within the scenery of actors. Other actors like Michael Madsen and James Parks are good in their roles as well, if not completely exceptional. The only performer in this cast that is not really great is Demian Bichir. It is unfortunate that an actor with Bichir’s capability is given a character that never amounts to more than a lazy stereotype, and while he tries his best, he never manages to flesh the character out the way others are able to do in their roles. He is, by far, the weakest link in an otherwise outstanding ensemble.

Tarantino will always be known for controversy, and this film is certainly no different. There are many who recoil from the film’s indulgence in the commentary on vile people and the horrible things they do to survive. Even so, that doesn’t discount the commentary entirely, and there is still a fascinating exploration into the relationships of these characters and how they must go about their interactions. It’s a display that has much to say on a thematic level and aided by strong direction and great performances, it only adds to the enjoyment. I do not expect everyone to have the same enthusiastic response to this film, but that is precisely what makes Tarantino a fascinating figure. Here’s hoping he continues inspiring great debates, no matter what form he may present them.