Happy Pride? The State Of LGBTQ In Movies 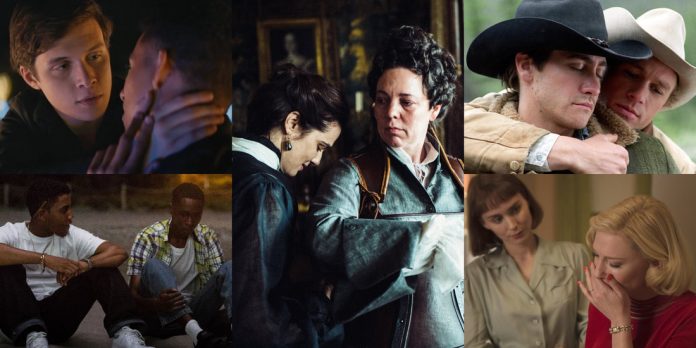 ​But that moment didn’t seem to stick. Only seven films featuring LGBTQ lead characters saw wide release (which I’m defining as 1,000 screens or more for purposes of this piece) over the next eight years. But then there seemed to be another moment for gay cinema in 2005, when “Brokeback Mountain” earned the equivalent of $108.9 million, as well as eight Oscar nominations. Yet again, it had been proven: Films about LGBTQ characters could make money, and could even become blockbusters. But Hollywood didn’t seem to notice, or think it was true: Since “Brokeback Mountain,” only nine films with LGBTQ leads have received a wide release. Over fourteen years.

Hollywood has always had a complicated relationship with gays on screen. For decades, they only existed as fops, foils for the heroes (and the audience) to laugh at and/or pity…. when they were even acknowledged at all. During the 70s and 80s, they were seemingly only shown on screen if they ended up being punished somehow, like loose women and criminal men in the days of the Hays Code. And in the late 80s through the early ‘90s, they mostly existed so that they could die of AIDS. Part of what made the period of 1995-97 so miraculous was that those big hit movies, headlined by big-name stars, featured a grand total of zero gay characters who died. They were presented as people who had similar wants and needs to everyone else, who had rich inner lives that were allowed to continue after the credits rolled. Audiences responded in kind, with their money, and with their voices: “In & Out” received a B Cinemascore grade, “To Wong Foo…” a B+ and “The Birdcage” an A.

But what audiences respond to isn’t always what Hollywood itself does. It is perhaps telling that the one of these films to get the most awards attention was “Brokeback Mountain,” the only one that ends with one of the leads dead and the other in misery. Even “The Birdcage,” a genuine popular hit directed by one of the world’s most legendary directors, and winner of the second ever SAG Award for Best Ensemble (for its awards-beloved cast), only managed one Oscar nomination: Best Production Direction. And one of the biggest factors in “Brokeback Mountain”’s Best Picture loss, at least anecdotally, was the outcry from some Old Hollywood leftovers – Ernest Borgnine prominent among them – about rewarding a film about gay cowboys.

Despite “Brokeback Mountain”’s financial success, Hollywood seemed to side with the old guard. Not even two years later, the black comedy “I Love You Phillip Morris,” starring Jim Carrey and Ewan McGregor as gay inmates who fall in love, premiered to great reviews at Sundance, and couldn’t find distribution in the US for almost two years. Around the same time, Steven Soderbergh was completely unable to get studio financing for his Liberace biopic, even with bankable stars Michael Douglas and Matt Damon attached, in awards-bait roles. The Hollywood studios deemed the film “too gay” and it took Soderbergh around three years to get funding, which finally came from HBO. “Behind the Candelabra” played to raves at Cannes in 2013, and won both the Golden Globe and the Emmy for Best Miniseries or Movie as well as Best Leading Actor in a Miniseries or Movie (for Michael Douglas).

​In 2016, another tipping point seemed imminent: Barry Jenkins’s “Moonlight,” about an African-American gay man coming of age in Miami, won Best Picture in an upset over presumptive winner “La La Land.” Was the industry finally ready to put LGBTQ stories on (more of) an even footing with heterosexual stories? It’s hard to say. In the two and a half years since “Moonlight,” five films featuring LGBTQ leads have seen wide release. Four of those, however, were biopics: “Battle of the Sexes” (about tennis champ Billie Jean King), “The Favourite” (about British monarch Queen Anne), “Bohemian Rhapsody” (the controversial Queen/Freddie Mercury story), and “Rocketman” (the Elton John bio-musical). The one that wasn’t, “Love, Simon”, was a high school rom-com. That “Bohemian Rhapsody” is the film that finally toppled “The Birdcage” from its perch as the highest-grossing film with an LGBTQ lead (adjusted for inflation or otherwise) should be notable – but between the built-in audience for the music of Queen and the fact that the film plays fast and loose with Mercury’s queer-ness, it doesn’t.

Where are the original stories about LGBTQ people? Films that show us as we are, as we always have been – as regular people? The answer, unfortunately, is that they are in the same place they were in the early ‘90s before audiences proved that they would come out for these kinds of films: In independent and foreign films that don’t get wide distribution. There have been so many fantastic films with LGBTQ leads this decade: “Beach Rats,” “Blue Is The Warmest Color,” “Call Me By Your Name,” “Carol,” “Can You Ever Forgive Me?,” “Pride” and “Weekend,” just to name a few. But they never get the opportunity to be widely seen.

We all know that Hollywood is slow to embrace change. African Americans, Asian Americans, Latinos… all have routinely had lead roles in wide release films denied them because Hollywood believed they wouldn’t bring in big numbers at the box office. And just because certain films do well in limited release doesn’t mean they will do well in wide release. And the way we view movies is changing, so it’s easier for people interested in LGBTQ films to find ways to view them than it was back in the ‘80s and ‘90s.

But we deserve better, Hollywood. We deserve better than the two minutes of a glorified extra in “Avengers: Endgame.” We deserve better than the blink-and-you’ll-miss-it nod in the live-action “Beauty & the Beast.” We deserve more than biopics of famous queer people (although those are certainly nice to have when they fully acknowledge and engage with the characters’ queerness). The audience for LGBTQ films is there. It has been for over twenty years. It’s currently feeding television, where it’s turned “RuPaul’s Drag Race” into a pop cultural phenomenon, and kept “Modern Family” on the air for ten seasons. LGBTQ people deserve to be seen and heard on movie screens just as much as they do on TV screens. So this Pride Week, culminating in the 50th Anniversary of the Stonewall Riots, I urge the Hollywood studios to think about how much money they could have made by feeding this audience over the past two decades. To think about how many stories there are to tell about the people marching for their rights, or cheering from the sidelines. To think about the quality art that could be made with these people. To put their money where their mouths are and back up their Pride Parade floats with more LGBTQ leads in wide release films.​