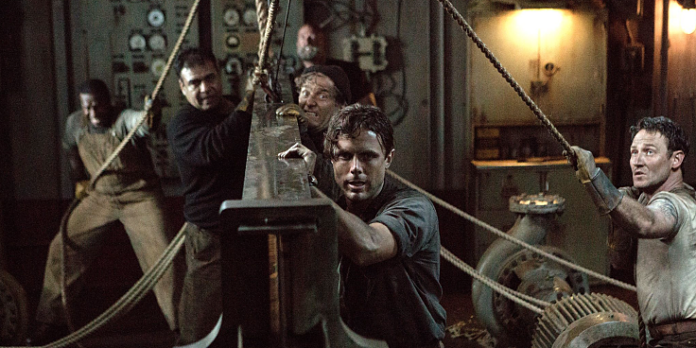 “The Finest Hours” is the kind of film that probably would’ve won Best Picture had it come out in the 1950’s. It’s an old fashioned story, with old fashioned trappings. Simply put, this is a film that will satisfy most viewers on the surface level. However, much like Michael Bay’s new film “13 Hours” which came out earlier this month, this true story lacks depth and stumbles its way through its 2 hour running time. It has a sense of a “been there, done that” type of feeling, and doesn’t do much to add dramatic depth or complexity to its proceedings.

Set in 1952, “The Finest Hours” tells the story of the United States Coast Guard’s mission to rescue a distressed oil tanker during a nor’easter in New England. The rescue mission is led by Bernie Webber (Chris Pine) who has been recently engaged (Holliday Grainger plays his wife, Miriam) and is sent out to save the split tanker by Officer Daniel Cluff (Eric Bana). First assistant engineer Ray Sybert (A commanding Casey Affleck), reluctantly finds himself in charge during this dire crisis for the 30 something crew members who have survived thus far and are awaiting rescue.

This is a well intentioned film that as stated before, will probably entertain a broader audience and the older generation of movie goers who can appreciate the nobler and simpler time that the story takes place in. However, those looking for a more complex story will leave the theatre disappointed wondering why they didn’t just watch this potentially riveting story unfold as a documentary somewhere else. The sequences at sea are indeed the best part of the film as the tension is certainly there, and the action amongst the dangerous waters captivates. Casey Affleck it must be said, gives a solid performance. An under appreciated actor, it’s his moments in the film that are the only thing keeping it afloat even though there are many leaps of logic within the carelessly written script (The maritime logistics do not compute and how have these guys not frozen to death in the freezing waters completely drenched is beyond me).

Chris Pine, who we have become accustomed to seeing on screen as the cocky commander James T. Kirk in “Star Trek” plays a different kind of captain in this film. He’s earnest yet inexperienced and not the smooth talking star we are used to seeing. His scenes back in Massachusetts with Holliday Grainger are cringe worthy due to their lack of chemistry and cliched dialogue. It tries to make us care about Bernie and his mission more by having the love story between the two, but instead derails the film completely. Perhaps this is less director Craig Gillespie and the writers fault, and there was some involvement from Disney to include the romantic subplot into the film when it’s not existent in the book from which this story is based on. Either way, the film suffers for it.

As stated before, when Bernie sets out on the suicide mission to accomplish the daring rescue, the film does find itself. However, there are still many glaring issues. For starters, the editing does not do a good job of explaining key information to the audience in understanding the logistics of the rescue, nor does it do us any favors when we are listening to characters describe scenes that we did not actually see. The constant cutting back and forth from land to sea also helps to halt whatever momentum the film starts to build for its climax. There are also a great many special effects shots that are not completely convincing. All of these glaring issues come together to stop what was once this captivating story, and manages to make me shrug my shoulders and await patiently for another artist to tackle this material.