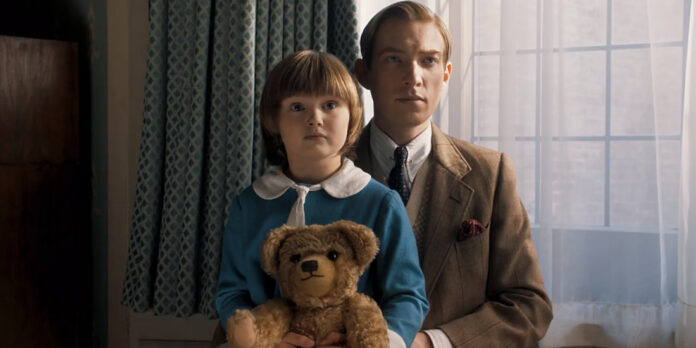 THE STORY – After leaving London for the English countryside, writer A.A. Milne starts to spin fanciful yarns about his son’s growing collection of stuffed animals. These stories form the basis for “Winnie-the-Pooh” and “The House at Pooh Corner,” published respectively in 1926 and 1928. Milne and his family soon become swept up in the instant success of the books, while the enchanting tales bring hope and comfort to the rest of postwar England.

We have seen plenty of feel-good weepy dramas that tell the true-life origins behind some of our most beloved stories, the perfect example being “Finding Netherland.” In Simon Curtis’ new film (Director of “My Week With Marilyn” and “Woman In Gold”), “Goodbye Christopher Robin” we see right away, through its own title that this will be a darker affair. That struggle between lightness and darkness is what makes “Goodbye Christopher Robin” a mixed bag at times as it tries to balance the two. Sometimes, the more fantastical direction works and sometimes it doesn’t. Sometimes the darker elements of the story help to make it more interesting and sometimes they don’t. Whichever it may be, “Goodbye Christopher Robin” still managed to contain enough clever direction, performances and moments to hold my interest and keep this from being a negative review.

After serving in World War I, writer A.A. Milne (Domhnall Gleeson) returns home to find that the world is wanting to move on from the war while many who served cannot and those who were left behind waiting for their husbands to come home have now had their families destroyed. “I don’t want to make them laugh, I want to make them see” he proclaims. He moves himself, his wife (Margot Robbie) and their son Christopher Robin (Will Tilston as the younger version and Alex Lawther) to the countryside so A.A. can have time to think and write his next book which he hopes will help those who need it in a post World War I world. However, something unexpected happens. As the writer struggles to write, he is suddenly inspired by his own son and his imagination with his childhood toys, a bear, a tiger, a pig and a donkey. After his wife leaves him due to his inability to write and their nanny (Kelly Macdonald) taking a few days off, A.A. and his son embark on a series of adventures in their woodland property with the toys over the next couple of days which serves as the inspiration for A.A. Milne to write “Winnie The Pooh.” The book goes on to be a success but at a cost that A.A. Milne did not see coming for his family.

“Goodbye Christopher Robin” means two things. It represents A.A.and Daphne Milne’s fear that the great war of World War I is not a thing of the past and there will be another which will come and take their son away. It also represents the loss of childhood innocence as Robin’s parents profit off of his childhood with little to no disregard for how this is psychologically affecting the child. What was meant to be a special and personal time between father and son, frolicking through the woods, playing with the toys which would go on to be beloved characters by millions worldwide, became exploitive and poor Billy (As he was known) became the victim. It’s both an interesting comment on searching for happiness after wartime when the country, and the world, really needed it, but at a cost.

There are some great moments throughout “Goodbye Christopher Robin” such as the clever editing transitions between Blue’s (As A.A. was called) time serving in World War I and his post-war life back at home. The exploration of PTSD for the character through editing and distinctive sound work (Bees in the woods, which would go on to be antagonists in his stories for Winnie The Pooh, are mistaken by Blue for flies that would swirl around the dead bodies during war) and how that was perceived by his son and those around him is quite intriguing but the film never fully allows itself to fixate on it enough. Other references to the beloved children’s book such as Eyeore’s house, the blue balloon that the character of Christopher Robin carries, the hilltop which Pooh and his friends would sit upon to look out at the 100 Acre Wood, are all nodded to in some way throughout the story. Anyone who grew up with the book or the Disney version of Winnie The Pooh will undoubtedly be touched by nostalgia in these moments.

While the woods which surround the Milne’s property is quite lush and beautiful (Simon Curtis does a great job of highlighting how magical the place can be in its own peaceful way), the darkness which the characters carry internally is what makes “Goodbye Christopher Robin” so unique. Domhnall Gleeson is mannered, polite and quiet on the outside while internally he struggles to be there for his son and put the war behind him. Margot Robbie gives a complex performance as a mother, who you get the sense of never loved her child as much as she should have initially due to a complicated birth that she feels almost killed her. Kelly Macdonald exudes warmth and emotion as Billy’s nanny who’s more of a parent to him than his actual parents. And Billy, Christopher Robin himself, is yet another mixed bag in a film that has plenty, as the child who is sweet and cute in the moments where he needs to be but in the scenes where he’s asked to do some dramatic heavy lifting, can be cringey and too forceful. Overall, I found enough to enjoy in “Goodbye Christopher Robin” that it held my attention throughout with its clever editing transitions, a good sense of pace, a fantastical score, and a story that was unlike what I was expecting.