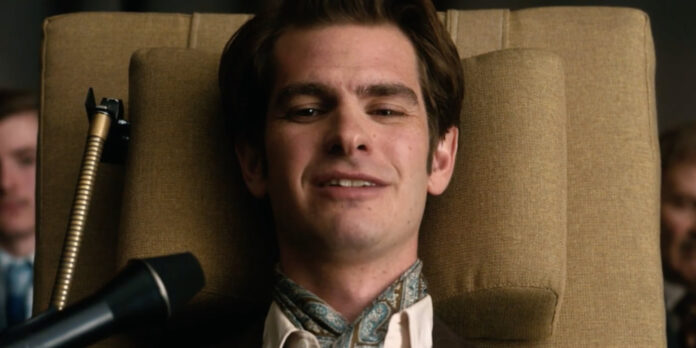 THE STORYAfter contracting polio at the age of 28, Robin Cavendish is confined to a bed and given only months to live. With help from his family and inventor Teddy Hall, Cavendish devotes the rest of his life to help fellow patients and the disabled.

“Breathe” commences with a disclaimer: “What follows is true.” This clever play on the classic, “Based on a true story,” lulls us into a feeling of anticipation. Indeed, the story is remarkable. Robin Cavendish (Andrew Garfield) was an athletic 28-year old when he was struck with polio. He was left completely paralyzed, entirely reliant on a respirator to survive. Robin’s wife Diana (Claire Foy), pregnant at the time of Robin’s diagnosis, took on the tireless role of caretaker. She persevered through Robin’s bouts of depression, arranged his liberating escape from the hospital to their home, and eventually led him toward a newfound zest for life. Through it all, Diana and Robin’s love endured, and they became pioneers in the push for reform in the treatment of the disabled. Robin’s use of an unprecedented mobile respirator symbolized new possibilities for disabled individuals who had previously been confined to isolating prison-like conditions in hospitals.

Claire Foy and Andrew Garfield are terrific together, though their performances at first seem too deliberately mannered. The first several scenes carry a whiff of “actors showing their prestige,” but as the love story between Diana and Robin develops, Foy and Garfield prove themselves to be a stirring pair. Similarly, director Andy Serkis, he of motion capture fame, escapes from the initial stuffiness of his choices to become a tender steward of the material. His direction is simple but moving, and he inserts some gorgeous panoramic shots to complement the sweeping sentimentality of the story. The symbiosis of Foy, Garfield, and Serkis, as well as the power of the narrative, is enough to generate a degree of emotional attachment.

But even when “Breathe” succeeds in making our eyes water, it fails to elevate itself above the trappings of a standard tearjerker. The overwhelming effort to pull at our feelings comes at the expense of a truly authentic experience. The movie’s big moments, which mostly involve Robin, Diana, and their son engaging in heartwarming bonding and reflection, are clearly manufactured from an old cinematic playbook, and all elements of surprise are lost. “Breathe” also features some insufferable supporting characters, including two friends of Robin’s who sing eccentric songs, wear crazy clothes, and speak in a fancy way that bears no resemblance to spontaneous conversation. It’s as if they are the human products of a recipe for “colorful supporting characters.” However, Tom Hollander and Hugh Bonneville are a welcome presence.

Ultimately, “Breathe” does not overcome the limitations of its conventions. It’s a noble and well-acted film, but a pretty dull one as well. But just when you’re ready to dismiss “Breathe,” you remember that it’s produced by Jonathan Cavendish, the real-life son of Robin and Diana, who made the movie as a tribute to his parents. And then your eyes start to well up, and you remember the moments in which “Breathe” found its way into your heart. In the end, despite your best efforts, the film gets our tears, whether we like it or not.