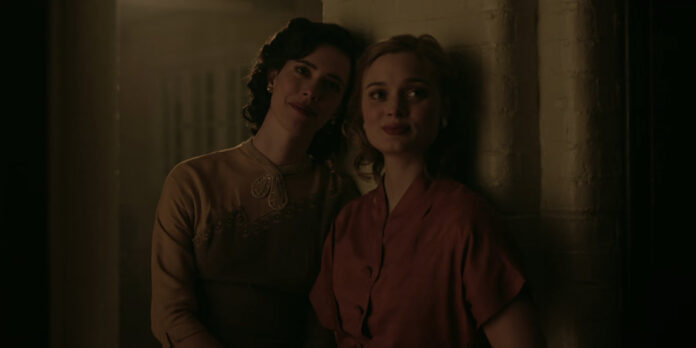 THE STORY – The unconventional life story of Dr. William Marston, Harvard psychologist and inventor, and the relationship between his wife and his lover, who became her lover after his death, that inspired the iconic super heroine Wonder Woman.

“Wonder Woman” released earlier this year to great fan approval and critical acclaim. And now she’s back in “Professor Marston And The Wonder Women.” Directed by Angela Robinson this film touches on a lot of different thematic elements in a rather poetic way. From dealing with identity, sexuality, and of course, love, “Professor Marston And The Wonder Women” travels across a lot of different planes and manages to not get its story and themes lost in the shuffle. The interactions between the characters are soulful and heart-warming giving the film an overall joyous feeling.

Willam Marston (Luke Evans) is a psychology professor at Radcliffe University during the 1920’s. He and his wife Elizabeth Marston (Rebecca Hall) work together studying how humans react to certain emotions. William lives his life teaching his lectures and proving his DISC theory, while Elizabeth battles with something much more difficult: The University of Harvard will not give Elizabeth her degree in psychology due to her gender. William hires a student of his to be his assistant in his studies, Olive Byrne (Bella Heathcote). The three of them then begin to grow as a friendship unit which ultimately leads to their collaboration in the invention of the lie detector. The three take turns asking each other incredibly personal questions about one another. These methods unveil the truth about the secret romantic love they all share for one another. This leads into a polyamorous relationship between the three main characters which then blossoms into Williams’s inspiration for the most popular female superhero of all time. The film flashes back and forth between this relationship during the 1920’s and an investigation happening against William during the 1940’s. William is being investigated for the violence, bondage, and “masochism” content within the Wonder Woman comics.

“Professor Marston And The Wonder Women” is easily going to be one of the most underrated films of 2017. There is an honesty and realism between how the characters are written and interact with one another. The interactions between the three main characters comes off so naturally, that you almost forget you’re watching a biopic. Not only due to how realistic the characters feel in terms of their delivery when it comes to both the comedic and emotional moments, but due to how nuanced the performances are.

I’ve said it once and I’ll say it again, 2017 is the year of the ensemble film. Ensembles have become incredibly important in the year of 2017 and “Professor Marston And The Wonder Women” is no different. Luke Evans is charming and romantic in the role of William. He delivers quite a passionate and inspired performance that may be his best yet. Bella Heathcote is quite stunning in her performance as well. She perfectly embodies that innocent, sheltered personality that eventually grows into breaking out of her shell to embrace who she really is. But the real show stopper of the film, of course, is the highly talented and underrated Rebecca Hall.

Hall has been killing it for years now but she is absolutely exquisite in this film. She is a powerhouse in terms of her character, which also happens to be the most layered of the three. She starts off as what appears to be an incredibly bitter person (Rightfully so) but then we get to watch her transformation into a loving and sweet individual. She attempts to hide a lot of her emotions throughout the film but then is able to let them all out as the story progresses. Her ability to express specific emotions comes through the relationship she shares with Olive and William. The trio of performances makes this ensemble absolutely glorious and quite possibly one of the best of the year.

The direction from Angela Robinson is precise and focused. From how the camera moves and functions in different scenes to how concise the editing is, Robinson really knocks this out of the park. Switching between handheld camera movements during the more dramatic scenes and then applying a more steady, stable approach in the dialogue scenes, Robinson tells the heart of the story through reaction shots. She finds a healthy balance between expressing emotions through dialogue and also through the editing. At times when a character would attempt to explain their feelings, she will cut to a reaction shot of a character so that we receive these emotions visually. Robinson does a fantastic job with this film and her direction deserves attention.

“Professor Marston And The Wonder Women” is a nuanced and poetic biopic that tells the story of how Princess Diana was created. The interactions between characters are poetic and soulful and really helps to make the film come to life. With a trio of fantastic performances, excellent editing, the establishment of mood and relationships and all with a sure hand from director Angela Robinson, “Professor Marston And The Wonder Women” might be one of the most underrated films of the year that no one is talking about. If you loved “Wonder Woman” and would love to see the backstory behind her creation, I full heartedly urge you to seek this one out.