“good luck to you, leo grande” 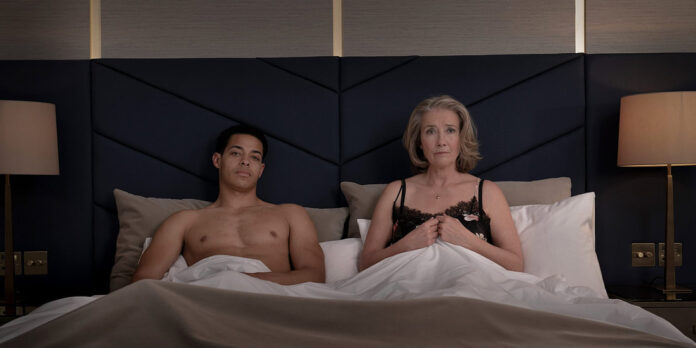 THE STORY – Nancy Stokes doesn’t know good sex. Whatever it may be, Nancy, a retired schoolteacher, is pretty sure she has never had it, but she is determined to finally do something about that. She even has a plan: it involves an anonymous hotel room, and a young sex worker who calls himself Leo Grande. Leo is confident, dapper, and takes pride in being good at his job. He also appears to be intrigued by Nancy – one of the many things to surprise her during their time together.

​Emma Thompson is a living legend – let’s get that indisputable fact out of the way, first and foremost. From her Oscar-winning performance in “Howard’s End” to her towering turns in literary adaptations “Sense and Sensibility” and “The Remains of the Day” to her equally playful and poignant parts in films like “Love Actually” and “Late Night” (the latter of which premiered at Sundance just three short years ago), she’s proved her worth as one of today’s most talented thespians time and time again. Her ability to continually reinvent herself over three decades into her career and constantly seek out some of the most multidimensional roles in cinema (in an industry infamous for moving women to the margins, especially “older” women) is nothing short of stunning.

With this year’s “Good Luck to You, Leo Grande,” she’s found one of her meatiest roles to date: a retired and recently-widowed woman named Nancy who, after a brutally boring marriage, is looking to rediscover her sexuality, hiring a handsome sex worker known as “Leo Grande” (a delightful Daryl McCormack) to assist her. What follows is a riotous and unexpectedly emotionally resonant exploration of sex positivity, sexual pleasure, and self-pride, enhanced by Thompson’s exceptional lead performance and a razor-sharp script from Katy Brand.

We’ve been moving towards more daring and transgressive depictions of sex in modern mainstream cinema for quite some time now, with films like “Magic Mike” and “Hustlers” portraying strippers and sex workers with stark sincerity and sensual sophistication and even the Best Picture-winning “The Shape of Water” proving revolutionary for its representation of explicit female pleasure and desire, no matter if it is with a “fish man.” But “Good Luck to You, Leo Grande” features one of the most straightforwardly honest scripts about sex that Hollywood might have ever seen. Without ever coming off as “preachy” or pretentious, Brand suffuses her script with sex-positive messaging that demystifies the daunting descriptions for a myriad of specific sex acts and empowers those who are inexperienced instead of shaming them for their supposed “ignorance.” Through McCormack’s magnetic Leo Grande, Brand reassures not just Thompson’s Nancy of her sexual and self-worth but anyone who has ever been made to feel sexually undesirable or inadequate, expressing the belief that bodies of all shapes and sizes can be sexual (and sexually appealing) and that every person possesses the capability to be pleased and please others.

Aside from those touching and tender themes, the humor in Brand’s script is hysterically hilarious. Using amusing asides to distract from the awkwardness of Nancy and Leo’s initial interactions is an ingenious approach that leans into the absurdity of the entire affair without ever making jokes at the expense of anyone involved. Brand finds a brilliant balance in surveying sex in a side-splitting manner and still emphasizes how exquisitely erotic this whole raucous rendezvous is. Her voice comes through terrifically via Nancy’s woes and worries, speaking on sexual concerns every woman has had at one point or another. She manages to convey these considerations compassionately and comically, treating this character with care but also highlighting the silliness in the situation at hand.

She’s equally as empathetic to Leo, circumventing “sex worker with a heart of gold” clichés and affording him much more agency and personal allure beyond what’s on the surface. He’s not mere “man candy” for Thompson’s Nancy to ogle; he has his own insecurities as well that one would not perceive at first given his charisma and chiseled physique, but Brand remembers to represent him as a whole human being with a personality beyond his work.

Thompson more than rises to the challenge of bringing Nancy to life with all of her complexities and contradictions intact, but given the actress’s experience in that area, it proves to be child’s play, with Thompson giving a ferociously funny but deeply felt performance that plays right into the raunchier bits of Brand’s script while retaining a heartening humanity throughout, treating Nancy as a person and not a punchline. The evolution of her confidence – both personal and sexual – is beautiful to behold, and Thompson depicts this ever so delicately, making Nancy’s progression feel plausible and never finding herself hitting a false beat.

It all culminates in a scorcher of a final shot, in which Thompson leaves everything on the screen (quite literally), essentially giving the middle finger to anyone who would rob an older woman of her sexual spirit or belittle her body. Here, Nancy – and Thompson – tell their haters that, try as they might, they’re no match for this revitalized resolve. McCormack is also a pretty seductive scene partner, continually defying conventions for his character and displaying his hidden depth handsomely, contributing to the crackling chemistry between the two. However, this is undoubtedly Thompson’s show through and through, and she turns in some of her most thrilling work in years.

At times, “Good Luck to You, Leo Grande” can feel a little too contained – primarily taking place in a single hotel room over three separate “sex sessions” – but a chamber piece needs propulsive dialogue to power audience engagement, and the film has that here in spades with Brand’s sterling script, which mostly keeps things moving at a prompt pace thanks to the compelling conversations between our two leads. And Thompson and McCormack deserve additional commendation for their contributions to our continual attention as well; if the pairing between the actors who played Nancy and Leo wasn’t pitch-perfect, it’s easy to see how the entire picture would swiftly fall apart. Thankfully, Thompson is a pro at this, McCormack is quite the promising star on the rise, and the two fill the film with wit and warmth – so much so that we never want these “sessions” to cease.