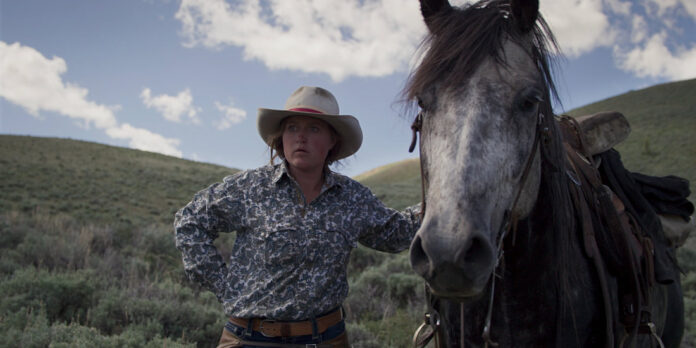 THE STORY – In the remote and rugged mountains of the American West, two young women contemplate the future as they work alone herding cattle.

​​​Men have dominated films about the American West and ranch riders over the years. From “Brokeback Mountain” in 2005 to last year’s “The Power of the Dog” to several decades-old western films, men have taken the reins when it comes to working out in the West. But not in Emelie Mahdavian’s documentary “Bitterbrush.”

Instead of the usual narrative, Mahdavian follows two female hired hands, Hollyn Patterson and Colie Moline, as they prepare for another season of rounding up cattle in one of the most remote areas in the West. The documentary shines as it focuses on the intricacies of these women’s fascinating lives, filled with isolation, harsh working conditions, and many questions about their futures.

We meet Hollyn and Colie, two friends who have known each other for about five years, as they’re loading up their horses and dogs in a trailer. As hired hands, they travel to different ranches for seasonal work, and they’ll spend the next four summer months herding cattle off of a mountain range. Cinematographers Derek Howard and Alejandro Mejía have stunning landscapes to work with, like open fields and snow-capped mountains filling every frame.

Once they arrive at the ranch, they’re completely isolated from the outside world and depend on each other for company (Hollyn’s boyfriend Elijah is also occasionally in the film). Mahdavian does a stellar job of capturing the many facets of their lives. During the day, the women are out on their horses for hours as they try to gather upwards of 500 cattle running around and hiding in every corner of the vast landscape. They giggle about their flattened sandwiches as they take a break from their strenuous work. At night, they gather around their cabin and talk about the path they’re on at this point in their lives. Mahdavian lets it all happen naturally, making it a much more intimate look at their world.

There’s beauty in their work, especially when you see them commanding a swarm of cattle on horseback. But there are also a lot of uncertainties about it, like if it’s a life they can continue to pursue. Colie has dreams of having her own ranch, but with her current job, it’s tough even to imagine buying a home, let alone the money required to purchase land and equipment. She says at least two people with farms back home have had to file for bankruptcy, and it makes her wonder if the same fate would await her. In another anecdote, Colie shares that her mother died of a brain aneurysm, and she regrets seeking medical care because of how expensive it costs. Hollyn, too, gets news toward the end of the documentary that makes her rethink her job prospects entirely. These moments provide so much insight to those who have likely never considered this type of life, and the best part, again, is that it comes about naturally in conversations between them.

“Bitterbrush” starts to lose its steam by the time the third act rolls around, though. While there are still interesting ranch work moments — the two women try to saddle train a young horse that’s quite resistant — they often go on for far too long. Once the women pack up their stuff and head back home, they separate at a crucial moment in their lives when they’re both unsure of what the future holds. But if Mahdavian has shown us anything in this film, it’s that these two women are tougher and more resilient than most. Even if uncertain times lay ahead, there’s nothing they can’t accomplish and endure together.