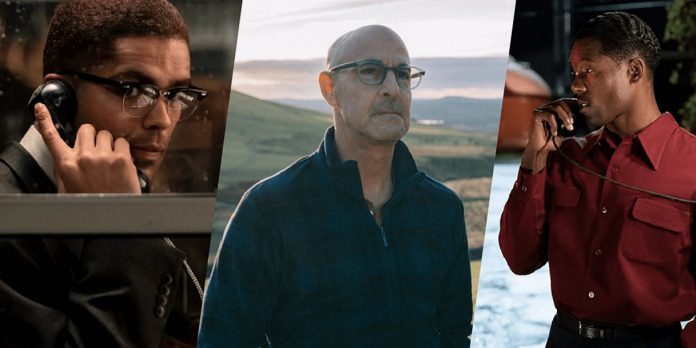 The HFPA is continuing to shake up the awards race, as the Golden Globes have reportedly shifted more category placements. As films submit for Globes consideration, the HFPA makes the final decision on whether films qualify for the Drama or the Musical & Comedy categories and whether actors should belong in Leading or Supporting categories. Variety reports some new changes, including for major Oscar contender “One Night in Miami…”

​The HFPA has ruled that all four stars of “One Night in Miami…” will compete in Supporting Actor. Months ago, Amazon decided to split the men, campaigning Kingsley Ben-Adir and Eli Goree in Lead and Leslie Odom Jr. and Aldis Hodge in Supporting. With the HFPA’s rejection of this split, it may indeed impact the film’s race. Leading actor was always going to be an uphill battle for newcomer Ben-Adir, due to much more competition. Odom Jr. became the film’s best hopes for an acting nomination at that point. Now that Ben-Adir can’t score a key, televised precursor, it hurts his chances of an Oscar nomination even more. There’s now also a chance that the actors will split votes at the Globes, but Odom Jr. is still likely safe.

Variety also reports that Stanley Tucci’s performance in “Supernova” will now compete as a lead, rather than in supporting as Bleecker Street had submitted him. Just as with Ben-Adir, his likelihood of breaking into the leading actor race at the Globes isn’t looking good. Bleecker Street hasn’t done Tucci many favors thus far by withholding the film so long. The film was never going to be an across the board contender. If it’s Tucci or bust, they need to generate some serious buzz. Few critics have seen the film thus far, and we’re still weeks away from release. Missing a Globe nomination won’t help things much.

Finally, Trevante Rhodes has also been submitted to the Globes as a leading actor for “The United States vs. Billie Holiday,” although the studio has yet to decide his final Oscar category placement. Yet another film that has been withheld for longer than seems wise, “The United States vs. Billie Holiday,” has reportedly been sent to the members of the HFPA. Unlike “Supernova,” Lee Daniels’ film always stood a shot at having above-the-line nominations even with a late release like this, but it’s still a risky play.

What do you think of this round of Golden Globe placements? Can Tucci and Ben-Adir break into their new Globe categories? Will “The United States of Billie Holiday” be a real contender? Let us know what you think in the comments or on our Twitter account.

Share
Facebook
Twitter
Copy URL
Previous article
The Next Best Picture Podcast: Episode 227 – The Films We Are Most Looking Forward To In 2021
Next article
“THE WHITE TIGER”